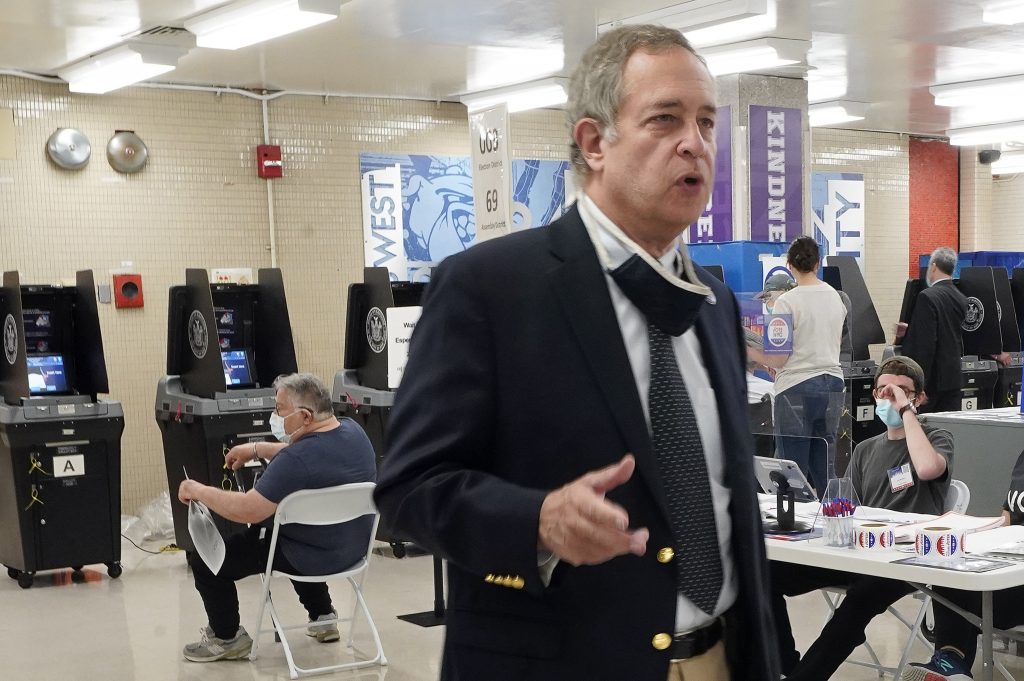 The mayor’s race, the first city election to use ranked choice voting, was thrown into disarray Tuesday after the city’s Board of Elections posted incorrect preliminary vote counts and then withdrew them hours later.

The corrected results still don’t paint a complete picture of the race. Nearly 125,000 absentee ballots have yet to be counted.

Adams’ thin lead means it is possible for Garcia or Wiley to catch up when absentee ballots are added to the mix starting on July 6.

Critics said the mistake Tuesday, which involved the accidental inclusion of 135,000 test ballot images in the vote totals, proved that the board was not equipped to handle the new ranked choice system.

“Yet again, the fundamental structural flaws of the Board of Elections are on display,” Mayor Bill de Blasio said in a statement Wednesday.

De Blasio called for “a complete structural rebuild” of the board, which operates independently of his office.

“I once offered the BOE over $20 million to reform themselves,” de Blasio said. “They refused, leaving legislative action as the next available recourse.”

The City Council’s Black, Latino and Asian Caucus — whose leaders favor putting a repeal of ranked choice voting on the November ballot — said in a statement: “Our members warned the public for months that the City was ill-prepared to execute elections under the new Ranked-Choice Voting system, and the concerns they raised continue to be borne out by the facts.”

Board of Elections officials apologized for their error and said they would release new ranked choice results Wednesday for in-person voting in the June 22 primary.

The results released Tuesday afternoon and then withdrawn appeared to show Garcia narrowly trailing Brooklyn Borough President Eric Adams in the race to succeed the term-limited de Blasio, with Wiley in third place.

Adams’ campaign, which had pointed out the vote discrepancy after the faulty count was released, said Tuesday that the former police captain remained confident he would win.

But Adams filed a lawsuit Wednesday seeking to preserve the ballots and voting machines to ensure an accurate count. “Today we petitioned the court to preserve our right to a fair election process and to have a judge oversee and review ballots, if necessary,” Adams said in a statement.

The lawsuit filed in state court in Brooklyn named the Board of Elections and the other Democratic mayoral candidates as defendants.

A Board of Elections spokesperson said she could not comment on pending litigation.

A Garcia spokesperson said, “While we remain confident in our path to victory, we are taking nothing for granted and encourage everyone to patiently wait for over 124,000 absentee ballots to be counted and included in the ranked choice voting tabulation. Every vote is important and deserves to be counted. New Yorkers overwhelmingly voted to enact ranked choice voting and participated in it by ranking multiple candidates in our City’s first ranked-choice election. Every candidate should respect the democratic process and be committed to supporting whomever the voters have selected to be the Democratic nominee for Mayor. We look forward to the final tabulation in this historic election.”

In a statement released by Maya Wiley’s campaign, the candidate said, “With more than 120,000 absentee ballots left to count – in addition to provisional ballots and potential recanvassing of results – this election is still wide open.”

Final results in the primary could be weeks away. The results that were released and then withdrawn on Tuesday didn’t include any of the nearly 125,000 absentee ballots cast in the Democratic primary.

Those ballots won’t be added to the count until at least July 6.

New York City adopted ranked choice voting for primaries and special elections in a 2019 referendum and used the system in citywide races for the first time in the June 22 primary.

Under the system, voters could rank up to five candidates in order of preference.

Since no candidate was the first choice of more than 50% of voters, a computer on Tuesday tabulated ballots in a series of rounds that worked like instant run-offs.

In each round, the candidate in last place is eliminated. Votes cast for that person are then redistributed to the surviving candidates, based on whoever voters put next on their ranking list. That process repeats until only two candidates are left.

Versions of the ranked choice system have been used in U.S. cities including San Francisco and Minneapolis for years and in statewide races in Maine.

Susan Lerner, executive director of Common Cause New York, which promoted adoption of the ranked choice system, noted in a statement that Tuesday’s discrepancy was due to human error, not a defect inherent in ranked choice voting itself.

“We are not at all happy that it happened, but it was a mistake that the BOE is moving to correct,” Lerner said.

Rob Richie, the president and CEO of FairVote, a nonprofit that advocates for ranked choice voting, said he did not believe Tuesday’s Board of Elections error would have a lasting impact on New Yorkers’ faith in the ranked choice system.

“This certainly, fundamentally, is not anything about ranked choice voting, and it certainly is about the historic challenges that the Board of Elections has faced,” Richie said.

The winner of New York City’s mayoral primary will be the prohibitive favorite in the general election against Curtis Sliwa, the Republican founder of the Guardian Angels.