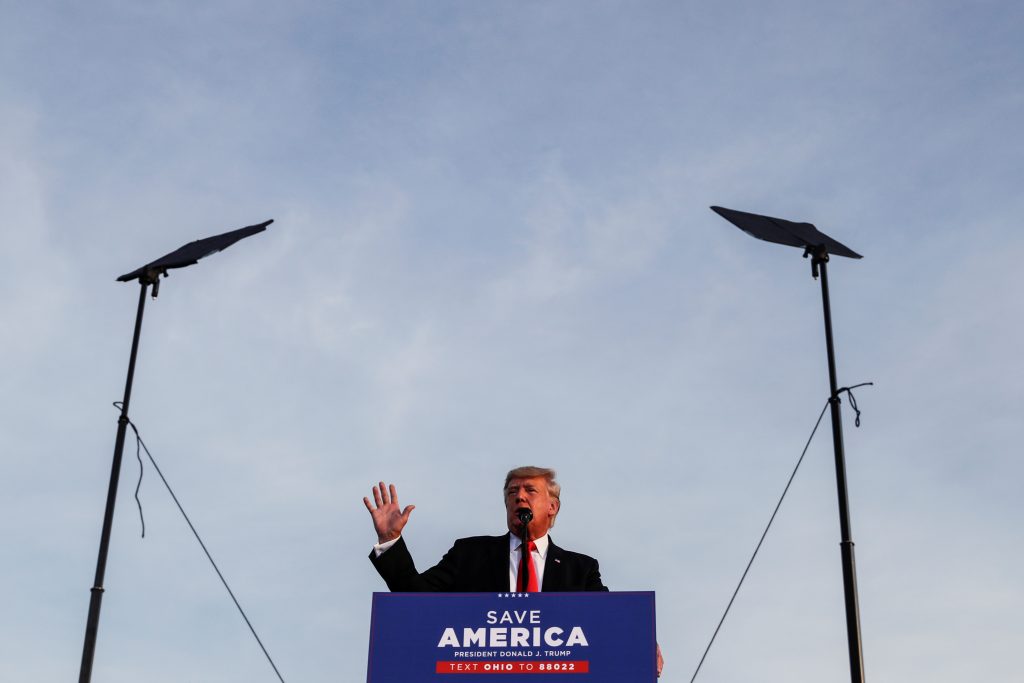 At his first rally since leaving the White House, former President Donald Trump on Saturday lambasted the Biden administration’s immigration policies and sought to energize Republicans to take back majorities in Congress next year.

Appearing to relish being back in front of thousands of supporters, Trump repeated his claim that his defeat in the November 2020 election was marred by fraud.

Trump survived a second impeachment on a charge linked to the violence and has kept broad influence over the Republican Party, in part by leaving open the question of whether he will run for office again in 2024.

He dangled that possibility on Saturday to the crowd.

“We won the election twice and it’s possible we’ll have to win it a third time. It’s possible,” he said.

Trump won the 2016 election against former Secretary of State Hillary Clinton. He lost in 2020.

Whether he runs again could be influenced by the outcome of various legal troubles. The Manhattan district attorney’s office has told Trump‘s lawyers it is considering filing criminal charges against his family business, the New York Times reported on Friday.

The former president highlighted parts of his regular grievance list at the rally, with particular focus on the rising number of immigrants crossing over the U.S. southern border, an issue Republicans have zeroed in on to rally their voters.

“You have millions of people coming into our country. We have no idea who they are. Joe Biden is doing the exact opposite as we did,” Trump said.

While keeping his political plans vague, the former president spoke forcefully in favor of getting his party back in control of the House of Representatives and Senate.

Democrats’ razor-thin majorities in both chambers of Congress will be on the line in the 2022 midterm elections and history favors Republicans’ chances of gaining seats in those contests.

While Trump has made speeches at Republican events since his defeat, the rally in Ohio, a state he won in 2020, marked a return to the freewheeling mass gatherings that have been critical to retaining the support of his enthusiastic base.

He campaigned for former White House aide Max Miller, who has launched a primary challenge against Representative Anthony Gonzalez, one of the 10 House Republicans who voted to impeach Trump on a charge of inciting the Jan. 6 attack on the Capitol that left five dead, including a Capitol Police officer.

Trump has vowed to campaign against all 10. He endorsed a challenger to Senator Lisa Murkowski, the only one of the seven Senate Republicans who voted to convict him in his January impeachment trial who is up for re-election in 2022.

The Ohio event in Wellington, about 40 miles southwest of Cleveland, was the first of three expected public appearances, followed by a trip to the U.S.-Mexico border with Texas Governor Greg Abbott on June 30 and a rally in Sarasota, Florida, on July 3.

Supporters said they hoped Trump would use such events to help unify the party behind like-minded candidates for Congress.

Trump repeatedly attacked what he called “woke generals,” following an exchange this week in which the top U.S. military officer hit back against a growing conservative movement opposed to teaching certain theories about racism.

“Our generals and our admirals are now focused more on this nonsense than they are on our enemies,” Trump said.

He criticized the media, a regular foil, and tried to co-opt the phrase “Big Lie,” which critics have used to describe his efforts to discredit the 2020 results.

Trump‘s repeated claims of election fraud have taken hold of Republican voters. Some 53% of Republicans believe Trump won the 2020 election and blame his loss on illegal voting, and one quarter of the overall public agreed that Trump won, a Reuters/Ipsos poll found.