Politics Biden: Infrastructure Vow Was Not Intended to be Veto Threat
Politics 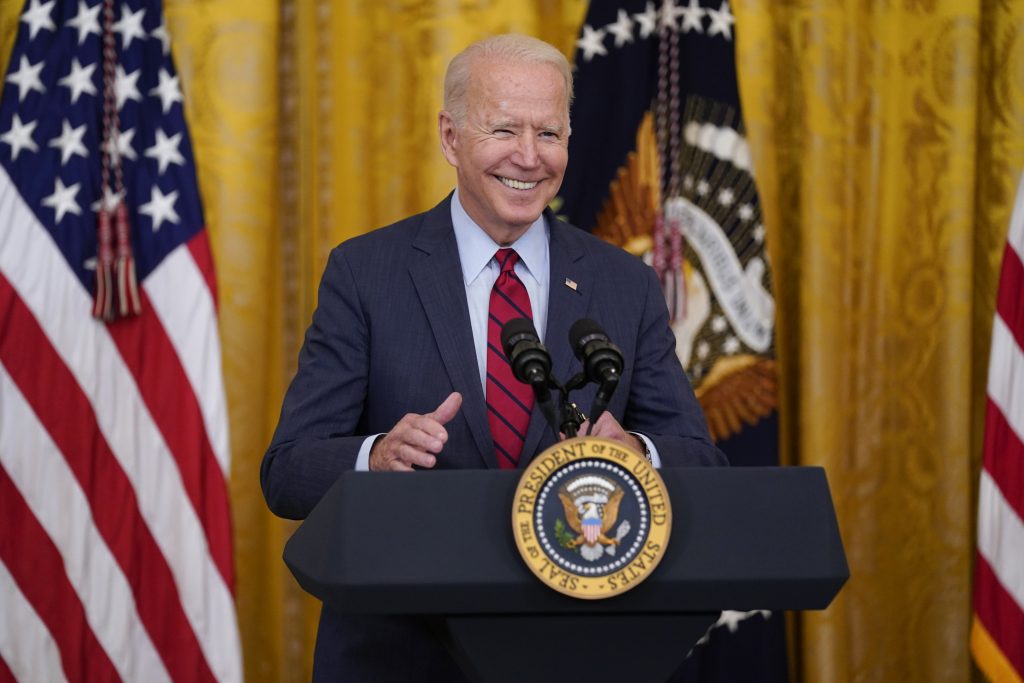 Aiming to preserve a fragile bipartisan deal on infrastructure, President Joe Biden endorsed it “without hesitation” Saturday, walking back from a threat to veto it if Congress also didn’t pass an even larger package to expand the social safety net.

Biden said he didn’t mean to suggest in earlier remarks that he would veto the nearly $1 trillion infrastructure bill unless Congress also passed a broader package of investments that he and fellow Democrats aim to approve along party lines, the two together totaling some $4 trillion.

Speaking on Thursday moments after fulfilling his hopes of reaching a bipartisan accord, Biden appeared to put the deal in jeopardy with his comment that the infrastructure bill would have to move in “tandem” with the larger bill.

Though Biden had been clear he would pursue the massive new spending for child care, Medicare and other investments, Republicans balked at the president’s notion that he would not sign one without the other. “If this is the only thing that comes to me, I’m not signing it,” Biden said then of the infrastructure bill. “It’s in tandem.”

By Saturday, Biden was seeking to clarify those comments, after his top negotiators Steve Ricchetti and Louisa Terrell worked to assure senators that Biden remained enthusiastic about the deal.

“My comments also created the impression that I was issuing a veto threat on the very plan I had just agreed to, which was certainly not my intent,” Biden said in a statement.

“I intend to pursue the passage of that plan, which Democrats and Republicans agreed to on Thursday, with vigor,” Biden added. “It would be good for the economy, good for our country, good for our people. I fully stand behind it without reservation or hesitation.”

Biden’s earlier remarks had drawn sharp criticism from some Republicans, including Sen. Lindsey Graham, R-S.C., who tweeted on Friday, “No deal by extortion!” Others felt “blindsided” by what they said was a shift in their understanding of his position.

Tensions appeared to calm afterward, when senators from the group of negotiators convened a conference call, according to a person who spoke on condition of anonymity to discuss the private meeting.

“My hope is that we’ll still get this done,” said Sen. Rob Portman of Ohio, the lead Republican negotiator, in an interview Friday with The Associated Press. “Our infrastructure is in bad shape.”

Biden was set to travel on Tuesday to Wisconsin for the first stop on a nationwide tour to promote the infrastructure package, the White House said.

The sudden swings point to the difficult path ahead for what promises to be a long process of turning Biden’s nearly $4 trillion infrastructure proposals into law.

The two measures were always expected to move together through Congress: the bipartisan plan and a second bill that would advance under special rules allowing for passage solely with majority Democrats votes and is now swelling to $6 trillion. Biden reiterated that was his plan on Saturday, but said he was not conditioning one on the other.

“So to be clear,” his statement said, “our bipartisan agreement does not preclude Republicans from attempting to defeat my Families Plan; likewise, they should have no objections to my devoted efforts to pass that Families Plan and other proposals in tandem.”

Before his clarification Saturday, not all senators were swayed by the White House outreach, which came after a tumultuous month of on-again, off-again negotiations over Biden’s top legislative priority.

The Democrats’ two-track strategy has been to consider both the bipartisan deal and their own more sweeping priorities side by side, as a way to assure liberals the smaller deal won’t be the only one.

A bipartisan accord has been important for the White House as it tries to show centrist Democrats and others that it is working with Republicans before Biden tries to push the broader package through Congress.

Ten Republican senators would be needed to pass the bipartisan accord in the 50-50 Senate, where 60 votes are required to advance most bills.

While the senators in the bipartisan group are among some of the more independent-minded lawmakers, known for bucking their party’s leadership, it appears criticism by Senate Republican leader Mitch McConnell of Biden’s approach could peel away GOP support.