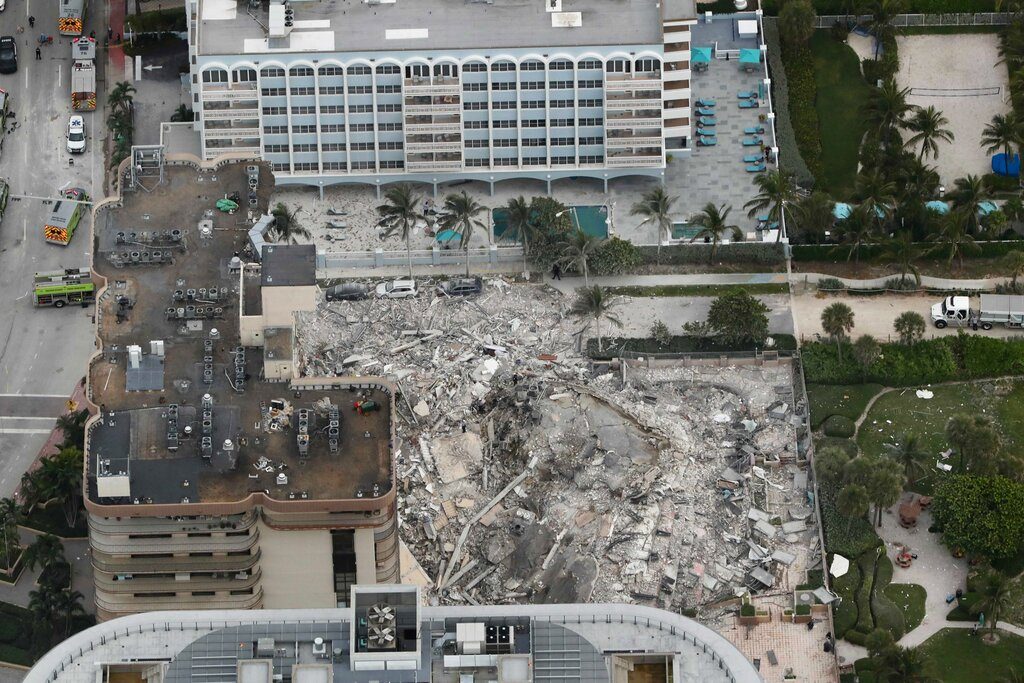 More than 80 fire and rescue units from throughout Florida were on the scene of the sudden Thursday morning collapse of a third of a 12-story, 136 unit apartment building in Surfside, a town several miles north of Miami. Multiple Jewish families were reported to have been in the building, either as residents or visitors. A Hatzalah member on the scene told Hamodia that 99 people were still missing, and as many of the building’s residents were Jewish, he was certain they were among the unaccounted for. He could not confirm if the Tehillim names circulating social media were accurate.

One person was reported dead, ten were injured, and two were taken to the hospital for treatment. The names of the deceased and those injured have not yet been released. Hatzalah said Jewish residents and guests were among the injured.

A Hatzalah of South Florida spokesman told Hamodia that Hatzalah has been on the scene since 1:30 a.m., and 20 members were providing first aid, triage care, and support for relatives of those who lived in the building.

“From what I understand, all people who could be rescued have been,” the Hatzalah spokesman told Hamodia. “People on site are evaluating the risk to still continue search and rescue.”

The collapse was so fast, there was no time for escape for those who lived in the section that collapsed, he said. 102 people in the building have been accounted for.

Hatzalah has established a command center on the scene as well as at the Family Reunification Center at the Surfside Community Center located at 93rd and Collins Ave for anyone loving for a loved one or affected by the accident.

The building, which was built in the 1980s, had 136 apartment units and was reported to be mostly occupied when it collapsed. There were 55 apartments in the section of the building that collapse, local police told CBS4 Miami. Neighboring homes and buildings were evacuated out of concern the rest of the building may collapse.

15 families managed to escape on their own, unharmed, and were taken to a local hotel to stay, ABC News reported. The search-and-rescue teams pulled 35 people from the rubble. Dozens remain unaccounted for.

“It’s a really, really tragic situation,” said Florida Governor Ron DeSantis at an emergency press conference. “We’ll hope for the best in terms of additional recoveries, but we’re bracing for some bad news, just given the destruction we’re seeing.”

The collapse happened around 1:15 a.m., at 8777 Collins Avenue, when a building more than ten stories high partially collapsed. Neighbors reported feeling the ground shake, hearing loud noises, and seeing clouds of smoke and dust coming their way, forcing them to cover their mouths and eyes.

“We saw this happen. It was by far the most horrific thing that I’ve seen. I was alive for 9/11. I didn’t see that happen in real life. I saw something like this happen and it’s the closest thing that I can relate to 9/11,” witness Mich Balkany told CNN.

People were rescued from their apartments by climbing into the bucket on a firetruck ladder and being slowly brought down the ladder.

A young boy was rescued when a man walking by saw the boy waving his hand from the rubble and heard the child calling out. Bystanders and first responders hurried over and managed to free the boy, who was trapped underneath a bedframe and mattress. Video showed the boy, who was in his pajamas, being lifted by the waist by a firefighter and carried over to a stretcher.

“This is a horrific catastrophe. In the United States, buildings just don’t fall down,” Surfside Mayor Charles W. Burkett said. “The building is literally pancaked. That is heartbreaking because it doesn’t mean, to me, that we are going to be as successful as we wanted to be in finding people alive.”

“MBPD and @MiamiBeachFire are assisting the Town of Surfside at a partial building collapse located at 8777 Collins Avenue in Surfside, Florida. Multiple police and fire agencies from across Miami-Dade are assisting,” the police said.

The reason for the collapse is unknown, though the roof had been undergoing renovations recently.

“Miami-Dade Fire Rescue is on scene of a partial building collapse near 88 Street & Collins Avenue. Over 80 MDFR units including TRT are on scene with assistance from municipal fire departments,” the department said.

Gov. Ron DeSantis, who toured the scene, said television did not capture the scale of what happened.

Rescue crews are “doing everything they can to save lives. That is ongoing, and they’re not going to rest,” he said.

With reporting by Reuters and AP.