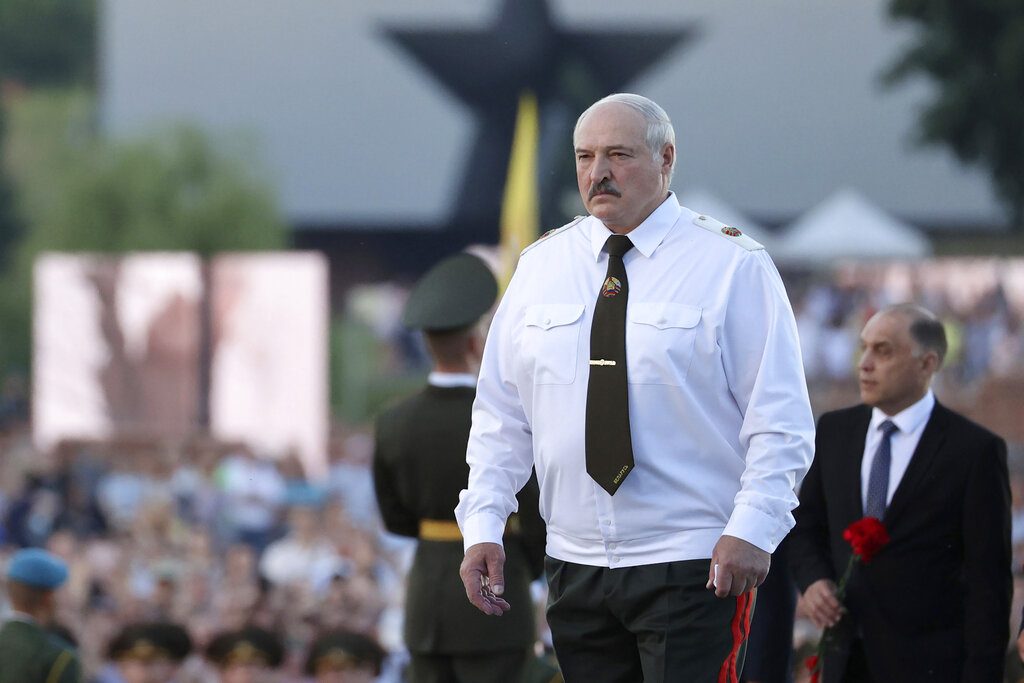 The European Union slapped economic sanctions on Belarus on Thursday in response to what the bloc called the “escalation of serious human rights violations” including the detention of journalist Raman Pratasevich.

The sanctions target the economy but are also aimed at hitting President Alexander Lukashenko and his allies.

Lukashenko raised the prospect of imposing martial law in response to the sanctions, but it was not clear what the aim would be of such a move.

“We must show these scoundrels on the other side of the border that their sanctions are their impotence,” he said, according to a report on the presidential website.

Pratasevich, a dissident journalist, was arrested May 23 after Belarusian flight controllers ordered a Ryanair jet traveling from Greece to Lithuania to land in Minsk.

“Trade in petroleum products, potassium chloride (‘potash’), and goods used for the production or manufacturing of tobacco products is restricted,” the EU said. The sanctions also include a ban on sales to Belarus of equipment and software that can be used to monitor the internet and phone calls.

The sanctions also restrict Belarus’ access to EU capital markets and halted payments to the country’s public sector by the European Investment Bank.

The EU has gradually ratcheted up sanctions since Lukashenko — dubbed the last dictator in Europe — won a sixth term last August in elections the bloc called fraudulent.

The 27-nation bloc has taken a tougher line since the Ryanair incident, and over the country’s alleged use of migrants to pressure neighboring Lithuania, which has provided a safe haven to Belarusian opposition figures and is one of Lukashenko’s most vocal critics.

On Monday, EU foreign ministers imposed travel bans and asset freezes on 78 Belarus officials and froze the assets of 8 “entities,” which are usually companies, banks, or associations. A total of 166 people and 15 entities in Belarus are now under EU restrictive measures. The United States, Britain and Canada also slapped sanctions on senior Belarus officials.

Independent political analyst Alexander Klaskouski told the Associated Press that the economic sanctions “are much stricter and more painful than the previous measures, which consisted only of blacklists of Belarusian officials and had practically no effect on Lukashenka’s behavior.”

He said the EU imposed the sanctions despite fears the measures “could push Belarus towards Russia and make Lukashenko easy prey for the Kremlin.”

German Foreign Minister Heiko Maas said earlier that the economic sanctions would take aim at “economic areas that are of particular significance for Belarus and for the regime’s income.”

That provoked an angry reaction from Belarus, with the country’s foreign ministry saying they would hurt ordinary people and “border on the declaration of an economic war.” The ministry warned the that the country would be forced to take retaliatory measures that would hurt Western companies.

Belarus has been shaken by months of protests fueled by Lukashenko’s re-election. The authorities responded with a massive crackdown that saw more than 35,000 people arrested and thousands beaten by police. Most opposition leaders have been jailed or forced to leave the country.

Since he was pulled off the Ryanair flight in Minsk, Pratasevich has been paraded on state TV, tearfully apologizing for his actions and praising Lukashenko. His parents, members of the opposition and others in the West believe he spoke under duress, with some saying there were signs he had been beaten.