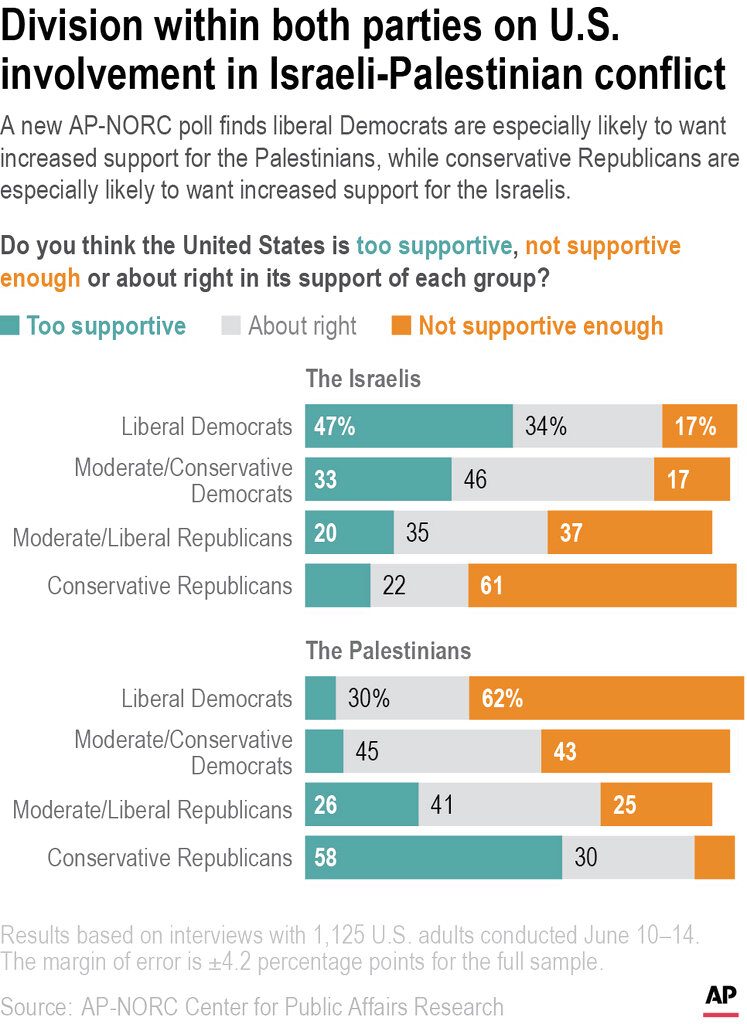 A new poll on American attitudes toward a core conflict in the Middle East finds about half of Democrats want the U.S. to do more to support the Palestinians, showing that a growing rift among Democratic lawmakers is also reflected in the party’s base.

The survey also examined Americans’ opinions on the Biden administration’s handling of the Israel-Palestinian conflict. The survey was conducted about three weeks into a ceasefire following a devastating 11-day war last month between Israel and the Gaza Strip’s Hamas militant rulers. The fighting killed at least 254 Palestinians and 13 people in Israel.

The poll shows Americans overall are divided over U.S. policy toward Israel and the Palestinians. It also shows more Americans disapprove of President Joe Biden’s approach to the conflict than approve of it.

Broad but not unvarying support for Israel has been a tenet of U.S. domestic politics, as well as its foreign policy, for decades. Biden refrained from publicly criticizing Israel over civilian deaths and waited until the last days of fighting last month to openly press Israel to wind down its airstrikes on heavily populated Gaza.

The war highlighted differences among Democratic lawmakers and between some Democratic lawmakers and Biden on Israel policy. Dozens of Democrats in Congress called for Israel and Hamas to cease fire immediately, days before Biden openly did. Sen. Bernie Sanders, a progressive Vermont independent, urged the U.S. to be more even-handed in its approach to the conflict.

Forty-two percent of liberal Democrats say they disapprove of how Biden is handling the conflict, compared with 31% of moderate and conservative ones.

That’s compared with just 9% of Democrats who disapproved of how Biden is handling his job in general. Overall, Biden’s job approval rating stands at 55%.

Since the cease-fire, Israel has transitioned to a new government that says it wants to repair relations with Democrats and restore bipartisan support in the U.S. for Israel. Former Prime Minister Binyamin Netanyahu had openly challenged both Biden and President Barack Obama on U.S. policy in the Middle East and was seen as allying himself to Trump.

Some of the respondents in the survey, both Democratic and Republican, cited the comparatively limited time span of the war — in comparison, 50 days of fighting in 2014 — in saying they approved of Biden’s handling of the conflict.