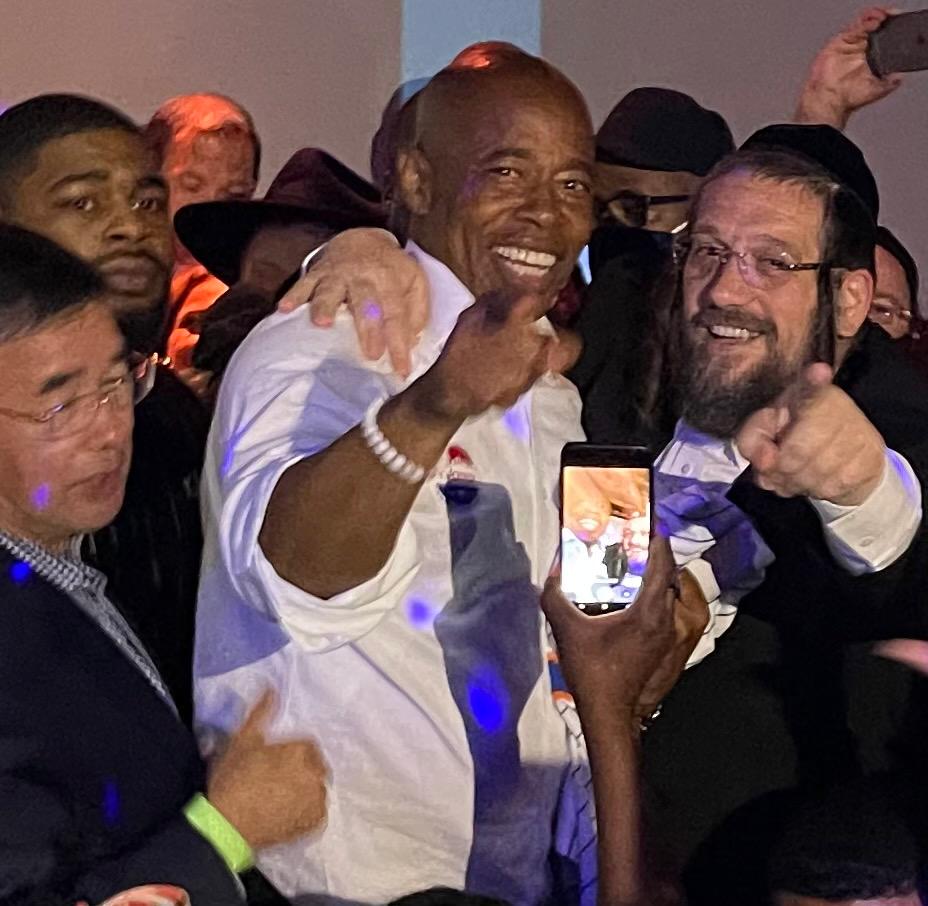 Eric Adams appears to have won the New York City mayoral Democratic primary, with a lead of more than 9 percentage points of first-place votes, though official results are pending absentee ballots and ranked-choice tabulation.

“The little guy won today,” Adams said in a speech to supporters in Williamsburg Tuesday night, which included acknowledgements that results were not final but which otherwise had the tone and substance of a victory speech.

The tallies were only of first-place votes for those who had voted in person; final results won’t be available for several weeks, after absentee ballots and the ranked-choice rounds are tabulated.

“We know that this is going to be layers,” Adams said, in a nod to the unofficial nature of the results. “We know there’s going to be twos and threes and fours. We know that. But there’s something else we know: that New York City said, ‘Our first choice is Eric Adams.’”

But most of the rest of his 40-minute speech, in which Adams recounted his difficult youth and emotionally paid tribute to his recently deceased mother, amounted to a victory declaration, with Adams stating, “I’m going to be your mayor, and I want you to believe again. Let’s bring our city back,” and promising, “In one year, you’re going to see a different city.”

The fourth-place finish represented a remarkable downfall for Yang, whom polls had shown leading by double digits as late as April and was still winning polls as recently as last month.

Adams, who currently serves as Brooklyn borough president and was previously a state senator, was expected to be a frontrunner as soon as he announced his candidacy last November. But Yang, an entrepreneur who gained national fame during a 2020 presidential run but has never held public office, entered the race in January and immediately grabbed the spotlight.

With his signature “universal basic income” proposal, energetic campaigning, a focus on being a “cheerleader” for a New York City reopening following the Covid shutdown, and spirited fans known as the “Yang Gang,” the candidate consistently led polls from February until May, including double-digit leads in two polls.

Adams had typically been polling second to Yang, until early May, when Adams led a poll for the first time. Adams’ heavy focus on crime-fighting — “public safety is the prerequisite to prosperity,” he liked to say — gained him support as the city has faced soaring numbers of shootings and murders for more than a year. An NYPD officer for 22 years who retired as captain and was a long-time advocate for racially sensitive police reform, Adams has nevertheless fought progressive calls for defunding police, supports a limited version of the stop-and-frisk tactic, and was viewed as among the most law-and-order candidates in the race. Decades ago he was a registered Republican for several years and had praised former mayor Rudy Giuliani’s crime-fighting success.

Yang’s position on policing was also moderate for a Democrat, but he didn’t make the issue nearly as much a priority as Adams did. As frontrunner, Yang faced extensive media scrutiny and attacks by opponents, and at times he displayed a lack of familiarity with issues reporters questioned him about, such as 50-a (the repealed law that shielded police disciplinary records) and the size of the debt of the MTA, an agency he had said he wanted the city to take over from the state. Critics also hammered Yang for having moved with his family to their upstate home during the pandemic and for his never having voted in a municipal election, declaring him unworthy of the mayoralty.

Garcia, the city’s former sanitation commissioner, had been mired in the low single digits in polling until May, when she received endorsements from The New York Times’ and the Daily News. Wiley, a former adviser to Mayor Bill de Blasio and civil-rights lawyer, had been polling around fourth place for much of the race, but received a boost when the Left coalesced around her in recent weeks after she received the endorsement of Rep. Alexandria Ocasio-Cortez, and fellow progressives Stringer and Morales saw their campaigns plummet amid scandal.

Stringer, the city comptroller who formerly served as state Assemblyman and Manhattan borough president, had been expected to be a leading candidate when he announced his candidacy in September, but had typically been polling around third place when he was accused in early May of having harassed a volunteer on a 2001 campaign, and he quickly lost many of his endorsements. A second accuser — whose claims dated to 1993 — came forward early this month, delivering the coup de grâce to Stringer’s campaign.

“I am not going to be the next mayor of New York City based upon the numbers that have come in tonight,” Yang told supporters in Hell’s Kitchen Tuesday night, acknowledging defeat less than two hours after the polls closed. “I am conceding this race, though we’re not sure who’s the next mayor is going to be. But whoever that person is, I will be very happy to work with them to improve the lives of the 8.3 million people who live in our great city.”

Neither Wiley nor Garcia have conceded the race.

If the next mayor is Adams, it is unlikely Yang would play any role in the administration: After running a largely positive campaign, Yang early this month began attacking Adams, as it became clear Adams was overtaking him in the race. When Yang, who is Asian, and Garcia, who is white, began campaigning together on Saturday and Yang encouraged his supporters to rank Garcia second, Adams said it was inappropriate for the two of them to have made the alliance, which did not include black or brown candidates, on Juneteenth.

Yang then accused Adams of “race-baiting,” and told a Hamodia reporter that Adams was the one candidate he would not want his voters to rank at all. Adams responded, “I’m still scratching my head – what is Andrew Yang still doing in this race?” and called Yang “a fraud” and “a liar.”

Adams and Yang won virtually every first-place endorsement in the Orthodox Jewish community; many who endorsed one endorsed the other for second or third, with Garcia also getting second- or third-place support.

Yang, a political novice, did extensive outreach in the Orthodox community, taking stances in support of yeshiva independence from government oversight and against the anti-Israel BDS movement. Adams, on the other hand, had built ties in the community during his years in office.

Community activists at the Adams campaign event Tuesday night told Hamodia that they endorsed Adams because they chose to go with the candidate who had a years-long record of support for the community.

Rabbi Abe Friedman, a long-time associate of Adams’, told Hamodia that Adams’ endorsers “judged him by his actions” and “said, ‘You believed in our community, we’re going to believe in you; we’re going to elect you the next mayor.’ And he’s going to do great for the Jewish community.”

Josh Mehlman, chairman of the Flatbush Jewish Community Coalition, one of the major Jewish groups to endorse Adams, told Hamodia, “We are thrilled that Eric won this race. We feel that the next mayor has to be someone with experience, who understands city government, and who has been there for our community for so many years. We believe in loyalty, we stay with our friends, and we believe that someone who has proven himself over the years is someone that will be with our community in the future. We are proud that we were able to put together a coalition throughout our community, and throughout the city, to support Eric’s campaign.”

In his speech Tuesday night, Adams thanked “the diversity of my coalition.”

“Our strength is in our diversity. It is in one another,” said Adams. “New Yorkers may be fiercely independent, self-reliant, formidable people by nature, but we are unbeatable when we are together.”

Adams also reiterated his opposition to progressive reformers, as he recounted the New Yorkers suffering from violent crimes.

“How dare those with their philosophical and intellectual theorizing and their classroom minsdet talking about the theory of policing?” he thundered. “You don’t know this. I know this. I’m going to keep my city safe.”

Adams also issued a challenge to Black Lives Matter supporters to focus on more than just police reform, but to help their community in other ways as well, and to take a stand against crime.

“I want to encourage you young black men and women in this city: If Black Lives really matter, it can’t only be against police abuse,” he said. “It has to be against the violence that’s ripping apart our community, and carving a highway of death for young people.”

The results of the Democratic primary arguably served as something of a refutation of the notion that the city has moved significantly leftward in recent years: Three of the top four candidates (Adams, Garcia and Yang) are considered moderates.

The winner will face Republican Curtis Sliwa in the general election on November 2. Sliwa, a radio personality who founded the Guardian Angels anti-crime group, won more than 70% of the vote against taxi-driver and bodega-owner advocate Fernando Mateo.

In a city in which registered Democrats outnumber Republicans by a 7 to 1 ratio, the winner of the Democratic primary is all but assured victory in the general election.