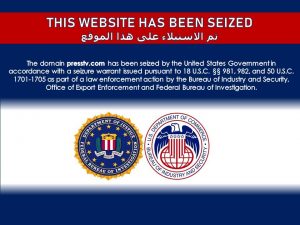 The United States has seized the website domain names “Aletejahtv.com” and “Aletejahtv.org,” which are used by the terrorist organization Kata’ib Hizballah.

Kata’ib Hizballah is an Iran-backed terrorist organization that operates in Iraq. Its websites posted propaganda in the form of videos, articles, and photos and contact information for the group. The sites encouraged people to join them and destabilize Iraq.

“Once again we see designated foreign terrorist organizations turning to the internet to push their message and recruit followers for their violent causes,” said John Demers, Assistant Attorney General for National Security. “We will continue to fight terror recruitment and propaganda efforts in the digital world, as we do elsewhere.”

The websites were being hosted by a company that was based in Scottsdale, Arizona without a license from the Office of Foreign Assets Control.

“Our system of commerce and our infrastructure, whether physical or electronic, is to be used by lawfully,” said U.S. Attorney Byung J. “BJay” Pak for the Northern District of Georgia. “We will not allow groups that have been rightfully prohibited from obtaining goods and services in the United States to use our internet services – especially to further their terrorist agenda. This seizure underscores national collaboration and a commitment to protecting our commerce and infrastructure.”