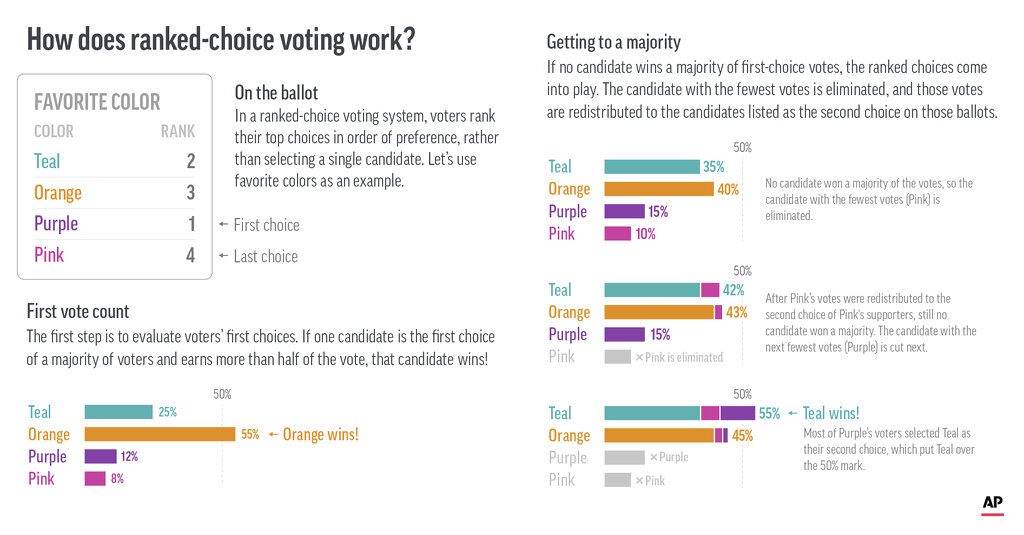 Ranked choice voting made its debut in New York City’s mayoral primary Tuesday, in one of the most high-profile tests yet for a system gaining use in pockets across the U.S.

The system is based on a simple premise: Democracy works better if people aren’t forced to make an all-or-nothing choice with their vote.

Rather than pick just one candidate, voters get to rank several in order of preference. Even if a voter’s top choice doesn’t have enough support to win, their rankings of other candidates still play a role in determining the victor.

But the system is more complex than a traditional election, making it tough to forecast a winner. It could take longer to get results.

HOW DOES IT WORK?

In New York City’s version, voters get to rank up to five candidates, from first to last, on their ballot.

If one candidate is the first choice of more than 50% of voters, that person wins the race outright, just like in a traditional election.

If nobody hits that threshold, ranked choice analysis kicks in.

Vote tabulation is done in rounds. In each round, the candidate in last place is eliminated. Votes cast ranking that candidate first are then redistributed to those voters’ second choices.

That process repeats until there are only two candidates left. The one with the most votes wins.

There are 13 candidates on the ballot in New York City’s Democratic mayoral primary. Only two candidates face off on the Republican side, making ranked choice a nonfactor.

All rounds of counting are done by computer in a process that takes very little time.

But absentee ballots complicate things. Because of the ongoing coronavirus pandemic, all people in New York are allowed to vote by mail.

Ballots are valid as long as they are postmarked by Tuesday, even if they take several days to arrive. A complete ranked choice analysis can’t be done until those ballots are included.

After polls close at 9 p.m. Tuesday, New York City’s Board of Elections plans to release data on where the vote count stands based only on people’s first choices, and only for votes cast in person.

A week later, on June 29, it will run its first ranked choice analysis, using only votes cast in person. Results will be posted on the board’s website. They will show who the winner and runner-up would be if no votes had been cast by mail.

A week after that, on July 6, the board will do another round of ranked choice analysis that includes all of the absentee ballots processed as of that date. If there are still uncounted or disputed ballots, the process will be run yet again on July 13, and every subsequent Tuesday until a winner can be declared.

One benefit of the system is that nobody “wastes” their vote by picking an unpopular candidate as their first choice.

You can follow your heart and rank someone you like No. 1, even if you suspect that candidate doesn’t stand a chance. If that person is eliminated, you still get a say in who wins the race based on your other rankings.

Another benefit is that it’s tough for someone to get elected without broad support. In a traditional election, it’s possible for someone with fringe political views to win in a crowded field of candidates, even if they are deeply disliked by many voters.

That’s theoretically less likely in a ranked choice system. A candidate could get the largest share of first-choice votes, but still lose to someone who is the second or third choice of a large number of people.

WHAT ARE THE NEGATIVES?

The system is tough to grasp. It requires voters to do a lot more research. It also makes races less predictable.

Transparency and trust are also potential problems. Ordinarily, candidates, the public and news organizations can see votes coming in, precinct by precinct, and know exactly who is leading and where their support is coming from.

Under the modern ranked choice system, the process of redistributing votes is done by computer. Outside groups will have a harder time evaluating whether the software sorted the ranked votes accurately.

That’s a headache for news organizations, like The Associated Press, that analyze vote tallies and attempt to report a winner before the count is complete.

And there may be instances where candidates who seem to have a comfortable lead in first-place votes on election night lose because relatively few voters rank them as their second or third choice. That could lead to people questioning the results.