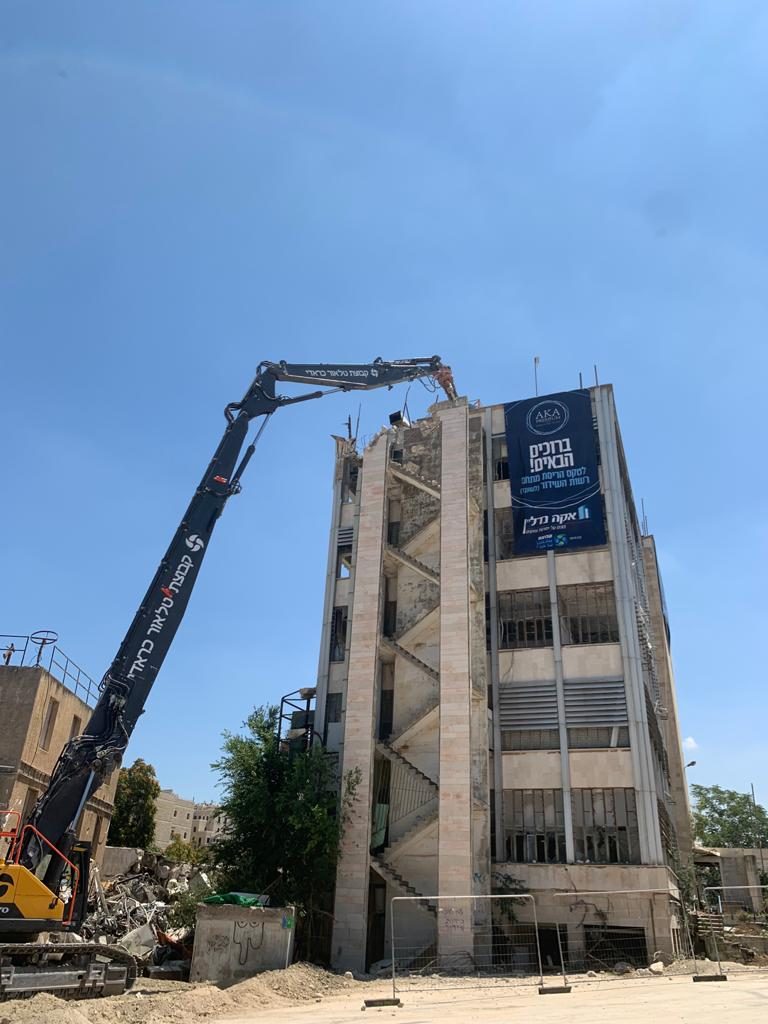 On Tuesday morning, after 53 years, one of the most iconic buildings in Yerushalayim was demolished. The Broadcasting Authority building, which became a symbol in the capital, was built in 1968 and closed five years ago, when the Israel Broadcasting Corporation was established. In recent years, the compound has been deserted, and on Tuesday, the demolition began, so that Aka Real Estate can build the Aka Premium project. This upscale housing development will be located at the highest point in Romema. It will include six buildings with 11 floors for a total of 308 apartment units. There will be three, four, five and six-room apartments, garden apartments, garden duplexes, duplex penthouses and triplex penthouses offering breathtaking views of the city.

Of the 308 units, 247 will be allocated through the Mechir Lamishtaken program and 61 apartments will be sold on the free market. Aka Real Estate won the tender to build the project, and marketing of the apartments is expected to begin in five years.

The investment in the project (including cost of the land) is nearly NIS 700 million. Planning is being done by the offices of Eyal Itzkin Architects, which specializes in planning residential projects. Construction will be done by Ashtrom, which has been cooperating with Aka Real Estate for many years.

Reb Eli Klein, the chairman and owner of Aka Real Estate, said, “We are parting today from an historic asset that was an integral part of the city for more than 50 years. The Broadcasting Authority compound has been abandoned in recent years, and today, we are starting the construction of the Aka Premium project, which will infuse the property with life once again. We understand the sentimental value of the structure… but the decision to demolish the building to make place for a residential project is an Israeli government decision. The abandoned structure has become an eyesore in a residential neighborhood; there have been a number of fires and homeless squatters have taken it over. The project we are building will provide modern new apartments in the center of the city.”

Aka Real Estate has developed a number of projects in Israel and in the Jewish world. The company has an expansive portfolio of leading projects including more than 1,000 units that are currently populated. Among the projects are the Shalem Tower, Ha’achuza, Mitzpe Nof, Psagot Yerushalayim, Mishkenot Kiryat Moshe and Mishkenot Hatchelet.

Aka Real Estate is currently developing and planning a number of new projects whose marketing will be launched in the near future.