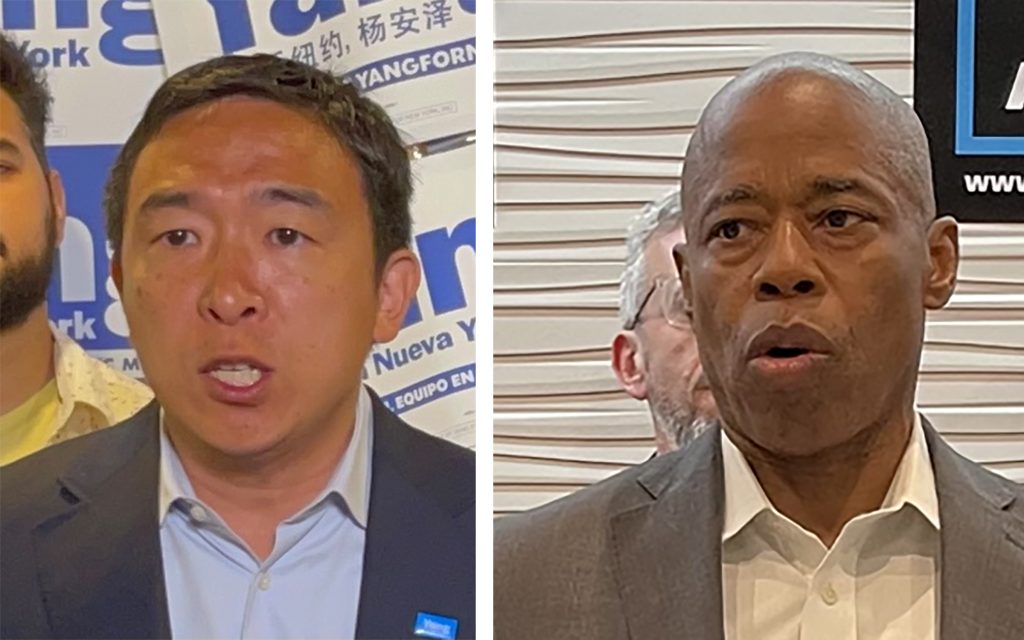 New York City mayoral candidates Andrew Yang and Eric Adams continued hurling barbs at each other, with Yang accusing Adams of “race-baiting” and Adams calling Yang a “fraud” and a “liar,” a day before a Democratic primary in which polls give Adams a solid lead after Yang had led for much of the campaign.

The latest round of insults come after Yang and another candidate, Kathryn Garcia, campaigned together Saturday to raise awareness for ranked-choice voting, which Adams, who is black, deemed an inappropriate alliance on the Juneteenth holiday. (Yang explicitly endorsed Garcia for the second choice; Garcia said she would not make any cross-endorsement.)

On CNN Monday morning, Adams said that Yang and Garcia joining forces on June 19, the just-declared federal holiday celebrating the end of slavery, “sent the wrong message” as the partnership between the white Garcia and Asian Yang crowds out black and brown candidates.

“They sent a signal, as you have all of the African-American and Hispanic candidates in the race,” Adams said. “What message were you sending during this time that we’re talking about how do you empower various ethnic groups in politics?”

On Sunday, Adams told reporters, “While we were celebrating liberation and freedom from enslavement, they sent a message, and I thought it was the wrong message to send,” noting that Yang and Garcia did not include in their alliance other black (Maya Wiley, Ray McGuire) or Hispanic (Dianne Morales) candidates.

Some of Adams’ endorsers went further, in comments shared by the Adams campaign. Former state comptroller Carl McCall called the alliance “an attempt to bring the disgraceful national campaign of voter suppression to New York,” and Ashley Sharpton, daughter of Al Sharpton, called it “a cynical attempt by Garcia and Yang to disenfranchise Black voters.”

Asked on the CNN interview whether he agreed with these comments, Adams said, “I can’t speak on behalf of my supporters,” but that “African-Americans are very clear on voter suppression: We know about a poll tax, we know about the fight that we’ve had historically how you had to go through hurdles to vote. And so if they feel, based on their perception, that it is [voter suppression], then I respect their feelings. It is not for me to interpret their feelings.”

At a campaign rally with volunteers at his Bensonhurst headquarters Monday morning, Yang shot back on the notion that his alliance with Garcia was racially insensitive, and accused Adams of “race-baiting.”

“It’s hard to characterize people getting out the vote as anything other than positive,” Yang said. “We need people to make their voices heard. We need people to express their preferences for more than one candidate. And so, I have a hard time seeing where he’s coming from. I will say that the last thing New York City needs is a mayor who uses race baiting anytime he is criticized.”

Asked whether he would be announcing a recommendation for third, fourth and fifth place, Yang, who has already cast his ballot and said he filled out five candidates, declined to make any further endorsements, but teased, “We may have some announcements coming out.”

When a Hamodia reporter asked whether there was “any candidate that you absolutely don’t want your voters to rank at all,” Yang replied, “Eric Adams.”

At a rally Monday afternoon with first responders at his Prospect Lefferts Gardens headquarters, the Hamodia reporter asked Adams for his response to Yang’s saying Adams should not be ranked.

“I’m still scratching my head – what is Andrew Yang still doing in this race?” Adams replied. “We know Andrew Yang is a fraud, he’s a liar, we could care less about Andrew Yang. We are so focused on the race. That’s what we’re doing.”

These were the latest salvos fired by the two candidates, in a race that turned nasty only over the past three weeks.

Yang, an entrepreneur who has never held political office, had been leading polls for months and had run a largely upbeat and positive campaign. Adams, a former state senator and current Brooklyn borough president, led a poll for the first time in early May, and by the middle of that month had firmly established himself as a co-frontrunner. As Adams began winning poll after poll, Yang began firing barbs on June 1, and the two have brawled ever since.

The latest poll, conducted by Ipsos from June 10-17 and released Monday, shows Adams with first-place support from 28% of the 2,924 respondents, followed by Yang at 20%, Garcia at 15%, Wiley with 13%, city Comptroller Scott Stringer at 8%. Shaun Donovan, a former city Housing Commissioner and former HUD Secretary, is tied with former Citigroup executive Ray McGuire at 5%; and former nonprofit executive Dianne Morales is at 1%. The poll shows Adams winning following the ranked-choice tabulation as well.

Yang and Adams have racked up nearly all first-place endorsements in the Orthodox Jewish community. Garcia, whose campaign has come on strong as of late after months of being mired in low single digits, has gotten lower-ranked support in the community.

Garcia is expected to bring in a large number of second-place votes, which could be crucial if the first-place-vote tally is close.

At an appearance Monday at Masbia of Boro Park, Garcia asked residents for their first-place ranking, but said that if they have already decided they like another candidate, “make me your number 2, because I look forward to working with this community, and all the communities across the city of New York.”

Garcia has generally not been one to exchange insults with other candidates, though her campaign spokesperson released a statement criticizing Adams’ “cynical attacks” as “factually wrong and insulting to New York City voters who passed Ranked Choice Voting by a 73% margin.”

“Ranked choice voting has been found to increase success for candidates of color in elections and expands the power of everyone’s vote,” said the spokesperson, adding, “We … hope all campaigns would encourage their supporters to fully exercise their voting power in this election, instead of resorting to divisive politics that erode New York City’s Democracy.”

“This partnership is not racist and we should not be using this term so loosely against other candidates,” Wiley said. “These accusations are a weaponization of real fears and concerns about our democracy, and have no place here.”

While the Democratic mayoral primary is getting the lion’s share of attention, there are other primaries Tuesday as well.

In the Republican mayoral primary, Curtis Sliwa, radio personality and founder of the Guardian Angels security group, will face Fernando Mateo, a taxi and bodega advocate. In heavily Democratic New York City, the winner of the Democratic primary is highly likely to win the general election as well.

In the 44th District, which covers large portions of Boro Park and Midwood, incumbent Kalman Yeger is not facing a challenger.

There are competitive races in the 38th and 39th Districts, which include small portions of Boro Park, and the 47th District, which covers Sea Gate, and portions of Gravesend and Bensonhurst.

Due to a large number of absentee ballots as well as the new ranked-choice voting rules, no winner is expected to be declared for several weeks.