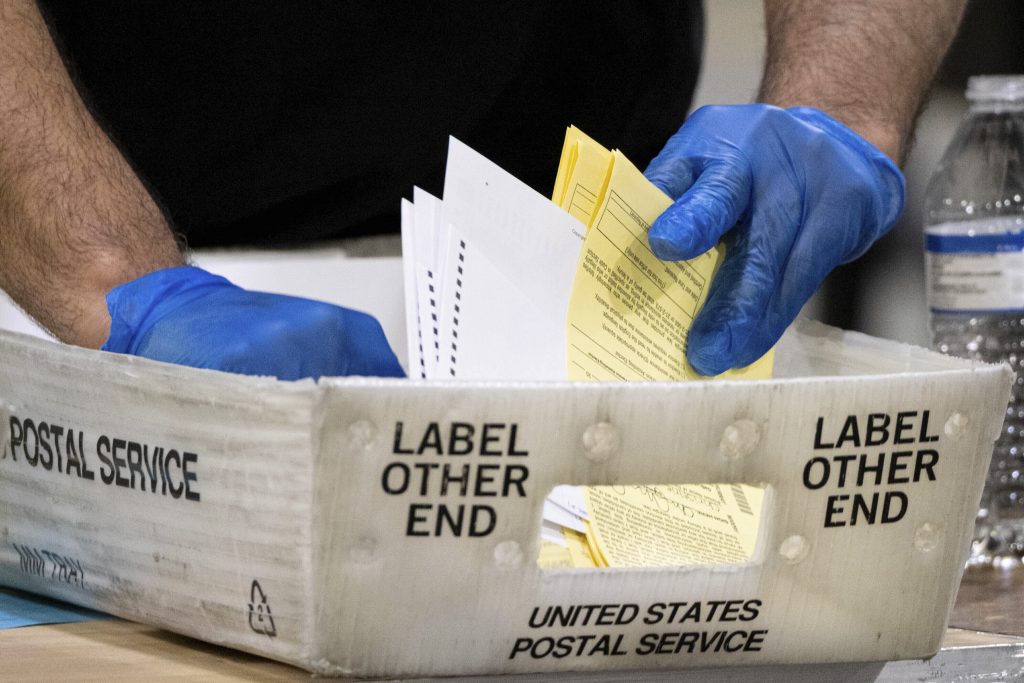 A judge is weighing whether to dismiss claims brought by a group of voters who allege that fraud during the November general election in Georgia’s most populous county resulted in the violation of their constitutional rights.

The lawsuit filed by nine Georgia voters alleges that counterfeit ballots were counted and some ballots were counted multiple times in Fulton County, a Democratic bastion that includes most of Atlanta. As part of their suit, they want to inspect some 147,000 ballots to see whether any are illegitimate.

Henry County Superior Court Chief Judge Brian Amero, who is presiding over the case, heard arguments Monday on motions to dismiss filed by Fulton County, the county election board and the clerk of the county’s courts. Amero said at the end of the hearing that he wanted time to review the arguments and last-minute court filings but that he would try to rule as quickly as possible.

Supporters of former President Donald Trump and others who allege fraud during the 2020 election have pushed for audits and reviews of ballots in several states around the country. Georgia has been a reliable Republican stronghold in recent years, and Trump refused to accept that he lost the state to Democrat Joe Biden by about 12,000 votes. He and his allies focused on Fulton County, repeatedly claiming widespread fraud occurred there.

Fulton County election officials have consistently defended the integrity of their election. State and federal officials have said there was no evidence of systemic fraud in the election.

Georgia’s election results were certified months ago, and there is no way this lawsuit can affect that. After the initial ballot count, there was a hand recount of the presidential race to satisfy a new audit requirement and then a machine recount at the request of Trump’s campaign.

The petitioners who brought the lawsuit have since split into two groups — a seven-person group led by Garland Favorito, a longtime critic of Georgia’s election systems, and a two-person group — with separate lawyers. Both groups are asking the judge to declare that their constitutional rights to due process and equal protection were violated by Fulton County in the November election.

Don Samuel, a lawyer for the county election board, argued that such a declaratory judgment can’t be used to address an alleged past wrong when there is no current controversy or future uncertainty. No one is disputing the rights of the voters to cast a ballot and have their votes counted in future elections, so there is nothing for the court to resolve going forward, Samuel argued. That sentiment was echoed by Steven Rosenberg, a lawyer representing the county.

Bob Cheeley and Todd Harding, lawyers who represent the petitioners, argued that their clients’ rights were violated because fraud led to a dilution of their votes and that similar violations will likely happen in future elections.

Several election workers and volunteers have signed sworn statements saying they saw absentee ballots during the audit that weren’t creased from being mailed, appeared to be marked by a machine rather than by hand and were printed on different paper. Cheeley said he wants to have specialists use high-powered microscopes to examine each absentee ballot for evidence of fraud.

Amanda Clark Palmer, a lawyer for the county election board, told the judge that the secretary of state’s office has investigated these claims and pulled the batches identified by those witnesses but found no evidence of fraudulent ballots.

The constitutional claims against the county election board are barred by sovereign immunity, a principle that says state and local governments can be sued only if they agree to it, argued Don Samuel, another lawyer for the board.

A constitutional amendment to impose some limits on sovereign immunity was approved last year by voters and would allow a county to be sued. But that applies only to things that happen after Jan. 1 of this year, said Steven Rosenberg, a lawyer representing the county. Since the lawsuit addresses the November election, the claims are barred by sovereign immunity, he argued.

Cheeley interpreted that amendment differently, arguing that it lifts the sovereign immunity protection for the county even for actions prior to Jan. 1.

Rosenberg also argued the petitioners in the case lack standing to bring the constitutional claims because those amount to generalized grievances rather than harm specific to those voters. Harding countered that they suffered the specific harm of having their votes diluted by fraud.

The lawsuit also included claims under the Georgia Open Records Act that Amero has already addressed.

The ballots and scanned ballot images are in the custody of the county courts clerk and are kept under seal. Amero in April ordered the clerk to release the scanned absentee ballot images to the petitioners. At a hearing last month, Amero ordered that the paper ballots themselves be unsealed so that the petitioners who filed the lawsuit can inspect and scan them, though he said they must remain in the county’s custody.

Before he could meet with the parties to discuss logistics for such a review, the motions to dismiss were filed and Amero scheduled Monday’s hearing to address those.

Samuel said the county election board isn’t sure the unsealing of the actual ballots is correct but wasn’t seeking to stop it. Rosenberg said he doesn’t believe the Open Records Act allows the ballots themselves to be unsealed, an argument that has also been made by Secretary of State Brad Raffensperger.