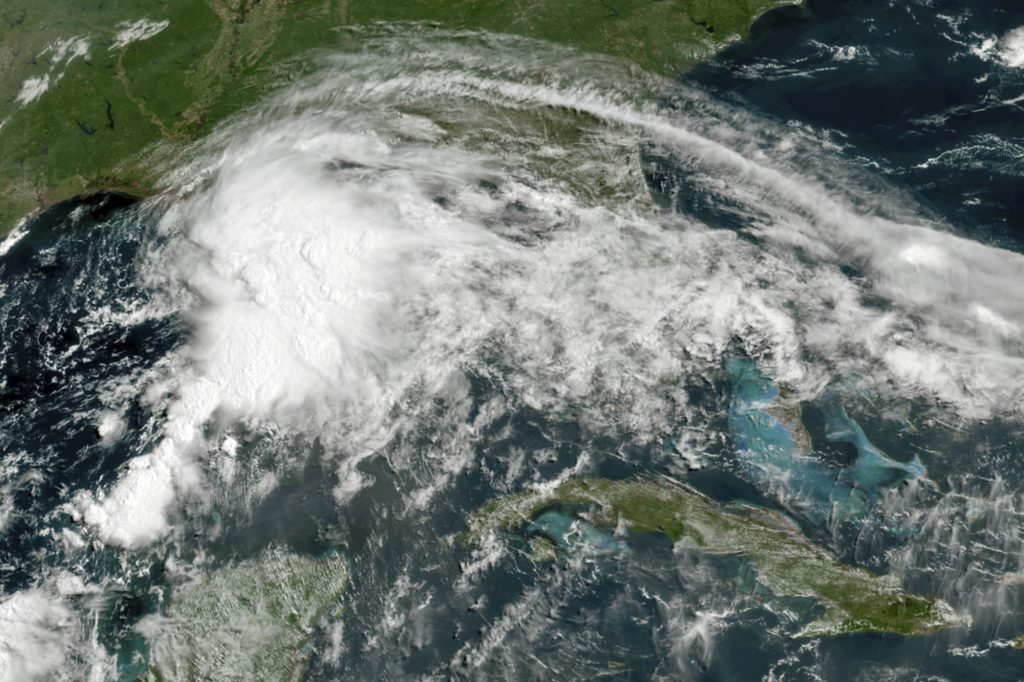 Officials ordered a floodgate and locks system closed in southeast Louisiana and readied sandbags in Mississippi and Alabama as a broad, disorganized tropical weather system began spinning bands of rain and brisk wind across the northern Gulf of Mexico coast Friday.

The system had not yet reached tropical-storm strength as of mid-morning. But, in anticipation of strengthening, a tropical-storm warning was in effect for parts of Louisiana, Mississippi, Alabama and Florida — extending from Morgan City, Louisiana, to the Okaloosa-Walton County line in the Florida Panhandle. Flash-flood watches extended along the coast from southeast Louisiana into the Florida panhandle and well inland into Mississippi, Alabama and western Georgia.

Children could still be seen playing on the beach under cloudy skies, with a rougher-than-usual surf roaring, at Gulf Shores, Alabama. Business owners kept an eye on the weather, hoping it wouldn’t ruin a Father’s Day weekend for the tourism-dependent coast.

At Tacky Jack’s, a popular restaurant on the Alabama coast in Orange Beach, “the winds are blowing pretty fast today so hopefully that wind will make the storm move faster and blow on out of here,” kitchen manager Greg Paddie said Friday.

Schumann, who is president of the Alabama Deep Fishing Rodeo on nearby Dauphin Island — one of the world’s largest fishing tournaments — is thankful the event is scheduled for next month, not this weekend.

By midmorning Friday, the system was centered about 220 miles south of Morgan City, Louisiana, with maximum sustained winds of 35 mph. It was moving north-northeast at 14 mph.

In Louisiana’s vulnerable Plaquemines Parish, the local government warned mariners that locks and a floodgate in the Empire community, near where the Mississippi River meets the Gulf, would close at noon.

Louisiana Gov. John Bel Edwards issued a state of emergency late Thursday. The move is an administrative step that authorizes the use of state resources to aid in storm response efforts.

The system is expected to produce up to 8 inches of rain across the Yucatán Peninsula of Mexico, and up to 12 inches through the weekend along the central U.S. Gulf Coast.

The combination of storm surge and the tide will cause normally dry areas near the coast to be flooded by rising waters moving inland from the shoreline, the hurricane center said. The water could reach heights of about 1-3 feet.

The threat of heavy downpours reached far inland. More than 140 miles from the coast, organizers of a Juneteenth festival in Selma, Alabama, cited the weather in postponing a daylong celebration until August.

Flood watches also extended into north Georgia. Up to 6 inches of rain will be possible in parts of west Georgia as the storm moves on its expected path to the northeast, the National Weather Service said.

There have already been two named storms during the 2021 Atlantic hurricane season. Meteorologists expect the season to be busy, but not as bad as the record-breaking 2020 season.

Mexico, while getting rain from the storm in the Gulf, was also threatened by a storm in the Pacific. Tropical Storm Dolores formed Friday morning and was expected to make landfall on Mexico’s west-central coast Saturday evening, possibly near hurricane strength, according to the National Hurricane Center.