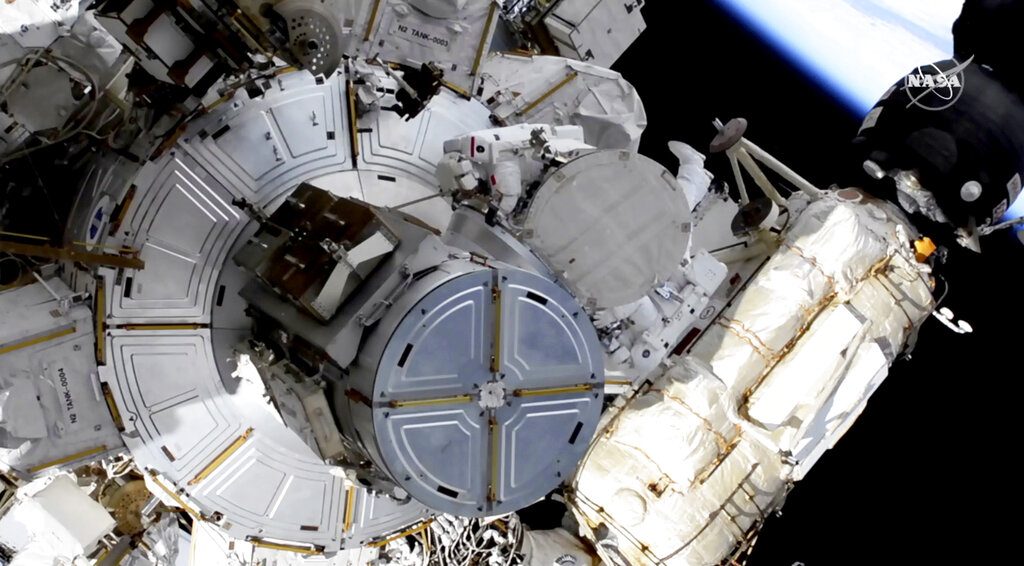 Astronauts ventured out on a spacewalk Wednesday to outfit the International Space Station with powerful, new solar panels to handle the growing electrical demands from upcoming visitors.

It’s the first of a series of spacewalks to equip the aging orbital outpost with smaller but stronger solar wings. The electrical boost is needed to accommodate the paying passengers expected to drop by, beginning with a Russian film crew this fall.

The duo had to conduct the most hazardous parts of the spacewalk on the nighttime side of Earth, to prevent the station’s old solar panels from soaking up sunlight and generating power. Metal surfaces on their spacesuits were covered to avoid any contact.

Launched by SpaceX earlier this month, the first of these new solar panels was going to be installed alongside the station’s oldest electricity-producing wings, in continuous operation for more than 20 years.

The astronauts had to lug the folded-up solar wing — 10 feet long by 4 feet wide and 2½ feet thick — to the work site on the far left end of the station. Once anchored in place, the solar panel was designed to roll out like a red carpet. It was expected to take six minutes to extend to its full 63 feet in length.

Pesquet and Kimbrough will go back out Sunday to install a second solar panel. Four more will be launched to reenergize the space station.

NASA wants to keep the space station churning out science research through this decade, and space tourists will further tax the power system. A Russian movie director and actress are due to visit in October for filming, followed by wealthy entrepreneurs launching from Kazakhstan and Cape Canaveral as part of a push to open up the private space market.