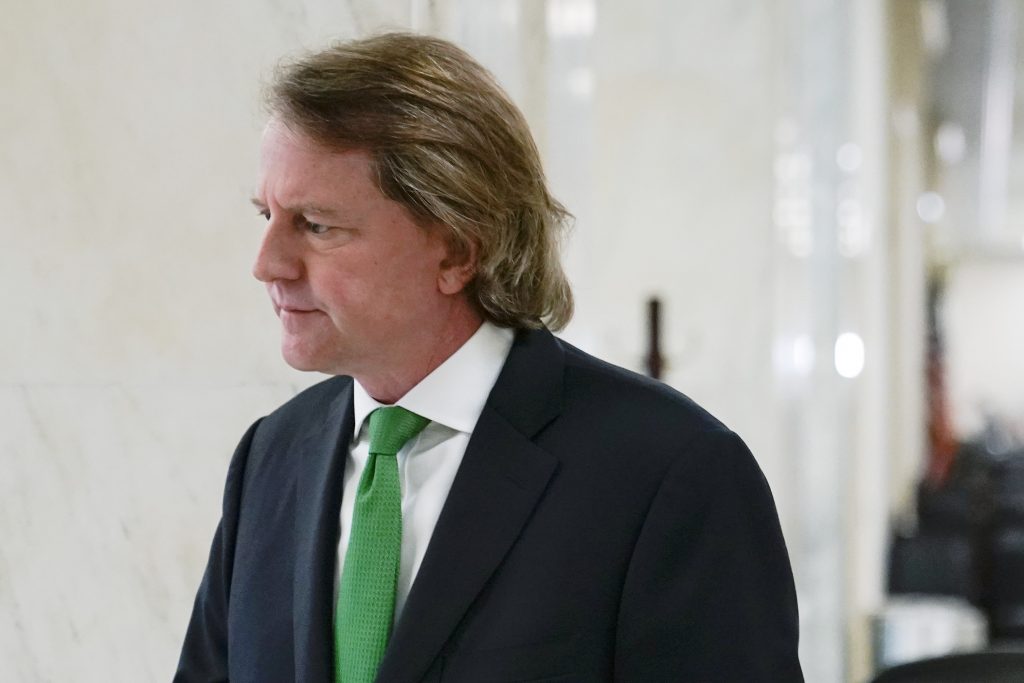 Apple informed former Trump White House counsel Don McGahn and his wife that the Justice Department had subpoenaed information about accounts belonging to them in 2018, a person familiar with the matter said Sunday, days after two House lawmakers disclosed they, too, had their information secretly subpoenaed.

It’s not clear yet why the Trump administration sought the McGahns’ records. But the others were part of a leak probe related to the investigation of Russian-related election interference. The disclosure that the Justice Department sought records of a sitting White House counsel and others was first reported by The New York Times.

Separately on Sunday, the Senate’s top Democrat called on the Justice Department’s chief national security official — a Trump appointee who has remained in the Biden administration — to testify under oath voluntarily or face a subpoena to answer questions about secretly seizing the phone data from House Democrats and reporters as part of the aggressive investigations into leaks.

House Speaker Nancy Pelosi, D-Calif., on Sunday also called on Barr, Sessions as well as Rod Rosenstein, the no. 2 Justice official at the time, to testify under oath in the House about what they knew. She declined to say whether she would push for subpoenas if they refused to appear.

“The Justice Department has been rogue under President Trump, understand that, in so many respects,” Pelosi told CNN. ”This is just another manifestation of their rogue activity.”

Schumer and Pelosi’s demands come days after news emerged that the Justice Department had secretly subpoenaed Apple for metadata from House Intelligence Committee Chairman Adam Schiff and another Democratic member of the panel, California Rep. Eric Swalwell, in 2018, as their committee was investigating the former president’s ties to Russia. Schiff at the time was the top Democrat on the panel, which was led by Republicans.

Demers has been in charge of the department’s national security division since February 2018, being sworn in a few weeks after the subpoena was issued to Apple for the Democrats’ records, and his division has played a role in each of the leak investigations. Schumer called on Senate Republicans to join in a demand to issue the subpoenas.

“This was nothing less than a gross abuse of power,” Schumer said of the seized records. “I don’t think we’ve ever had a record of this in the past. … This is about separation of powers.”

President Joe Biden has nominated Matt Olsen, an executive at Uber who has experience in the Justice Department and served as director of the National Counterterrorism Center and as general counsel for the National Security Agency, to be the next assistant attorney general for national security.

But Demers has remained in place while Olsen awaits a confirmation hearing in the Senate. The former Boeing airline executive is one of the few remaining Trump appointees still in office.

The records of at least 12 people connected to the House intelligence panel were eventually shared with the Justice Department by Apple after the subpoena was issued in 2018, including aides, former aides and family members. One was a minor.

The subpoena, issued Feb. 6, 2018, requested information on 73 phone numbers and 36 email addresses, Apple said. It also included a non-disclosure order that prohibited the company from notifying any of the people and was renewed three times, the company said in a statement.

On Friday, the Justice Department’s inspector general launched a probe into the matter after a request from Deputy Attorney General Lisa Monaco. Inspector General Michael Horowitz said he would examine whether the data subpoenaed by the Justice Department and turned over by Apple followed department policy and “whether any such uses, or the investigations, were based upon improper considerations.”

In recent weeks, the Justice Department notified news organizations that it secretly seized phone records belonging to reporters at The New York Times, The Washington Post and CNN as part of criminal leak investigations.

Following an outcry from press-freedom organizations, the Justice Department announced earlier this month that it would cease the practice of going after journalists’ sourcing information.