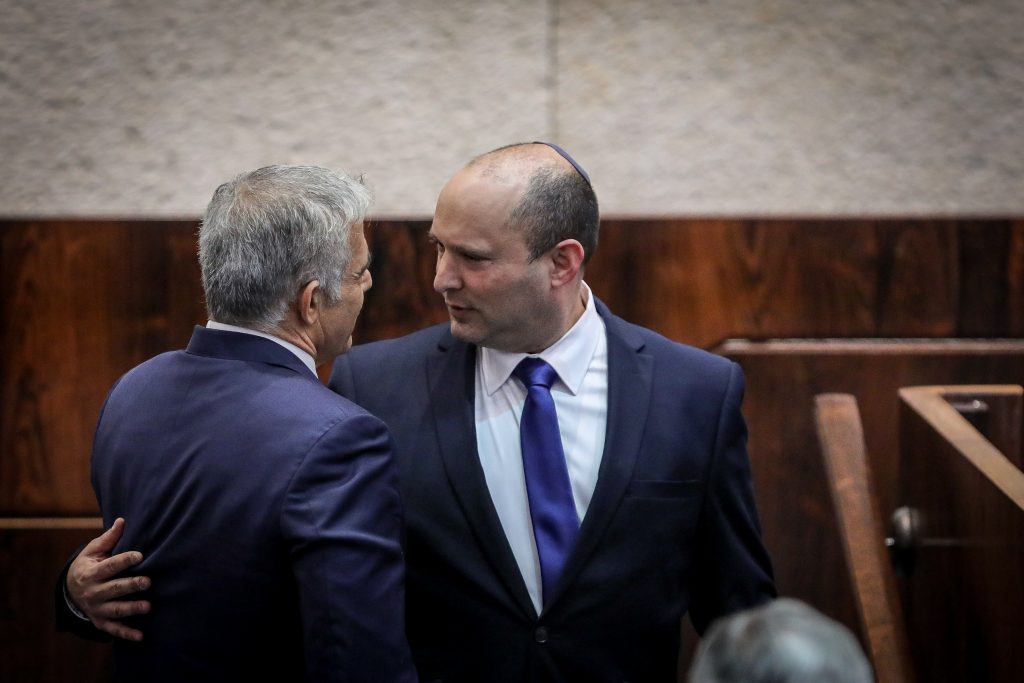 Twelve years of ceaseless efforts to drive Prime Minister Binyamin Netanyahu from power culminated on Sunday evening as Naftali Bennett was confirmed by the Knesset as the new prime minister.

The Knesset chamber erupted in cheers after Bennett was voted in 60 to 59, with one MK from Ra’am abstaining.

The vote came after a raucous session marked by heckling, shouted protests and the ejection of a number of MKs from the plenum for disorderly conduct. Bennett was forced to speak over the catcalls, Lapid canceled his speech, while Netanyahu had a somewhat easier time.

A short time later, U.S. President Joe Biden congratulated Bennett and said he is looking forward to working with him.

“On behalf of the American people, I congratulate Prime Minister Naftali Bennett, Alternate Prime Minister and Foreign Minister Yair Lapid, and all the members of the new Israeli cabinet. I look forward to working with Prime Minister Bennett to strengthen all aspects of the close and enduring relationship between our two nations,” said the presidennt.

Immediately prior to the vote for prime minister, Yesh Atid’s Mickey Levy was voted to succeed Likud’s Yariv Levin in the key post of Knesset speaker.

Netanyahu briefly shook Bennett’s hand, though his facial expression was not visible due to the mask he wore. He was surrounded by well-wishers from his outgoing coalition, who shook his hand.

Blue and White head Benny Gantz, who will continue as defense minister, thanked Netanyahu for his contributions to Israel despite the bitter disputes that broke up their coalition.

“We’ll take it from here,” said Gantz, according to the Times of Israel.

In his remarks during the debate Gantz pledged the new government will continue to oppose the U.S. reentry into the Iran nuclear deal — but unlike Netanyahu—discreetly.

“We will continue to work with the administration and strengthen our ties so that Iran will not obtain nuclear weapons. We will influence them so that the deal, if it is signed, will set Iran back,” said Gantz.

“Obviously, we will oppose a bad deal… but we will do it in the proper forum and with the appropriate means, and not from the Knesset podium,” he added.

After the news of the government changeover was official, there was dancing in the streets in Tel Aviv’s Rabin Square. Thousands of people, many of them activists in the anti-Netanyahu groups that clamored for his removal for years, turned out to celebrate.

About a hundred pro-Netanyahu activists gathered outside the Prime Minister’s Residence in Yerushalayim at the same time, to show their support, Ynet reported.

Monday afternoon Netanyahu and Bennett are scheduled to hold a transition meeting. As a former chief of staff to Netanyahu and having served as minister of defense and education, Bennett is already familiar with the administrative structure in the Prime Minister’s Office, presumably there are state secrets and protocols which his predecessor will now have to show him.

The changeover also entails the physical changing of offices, as outgoing ministers and deputy ministers vacate for their successors. Yair Lapid is clearing out his opposition leader’s office to make way for Netanyahu.