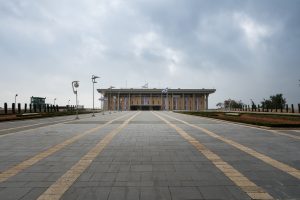 Barring a last-minute miracle — which always remains a possibility — in the coming days, a new government will be sworn in in Israel, one that will put in grave danger virtually everything that is vital and precious to Torah Jews. Perhaps more than anything else, what is at stake is what is left of an understanding that predates the founding of the State of Israel, one that has long been referred to as the “status quo.”

In order to understand what lies behind these two words, some historical background is in order.

The Zionist founders of the State of Israel were fanatical in their opposition to religion, and especially to an Orthodox way of life, seeing it as an expression and continuation of the exile. They focused on building the “new Jew; they promulgated disdain — and even blame — for the “galus Jew,” the weak, religious, nose-in-his-books Jew who went like “sheep to the slaughter.” The “new Jew” would shed all vestiges of the galus Jew and his religion.

In the months before the question of the establishment of a Jewish state would be brought before the United Nations General Assembly, two commissions of inquiry regarding the political future of Israel were sent to Israel to examine the issue.

The Jewish Agency worried that if the Agudah would resist the establishment of the state, it might leave the wrong impression on the U.N. Committee.

From Agudas Yisroel’s perspective, the ideal solution would have been the “establishment of a political regime that would allow free immigration to all.” The crucial question was what character and content the new Jewish state would have.

The critical question for Agudas Yisroel was: Could Orthodox Jews live in the country within the framework of this state?

“To say in all conscience that we are fully in favor of a state is difficult as long as there is no guarantee for matters of religion. A Jewish state in Israel which is not run according to the Torah is a chillul Hashem among Jews and gentiles, and a danger to religion.

“However, just as it is impossible to say with a full conscience that we are for a state, we also cannot say that we are against it without causing a chillul Hashem. In this event, they will lay all the responsibility on us and blame the Orthodox Jews for upsetting it and making it fail.

“The view of Harav Dushinsky and the Brisker Rav is also that one should not oppose it.”

Agudas Yisroel therefore engaged in tense negotiations with the Jewish Agency to guarantee the basic conditions for Torah observance in the embryo state.

This was why the Zionists were determined to reach some sort of compromise with the Agudah, and this led to the “status quo” agreement reached in the summer of 1947, establishing a framework of coexistence that both camps would learn to accept.

The Jewish Agency wanted political unity but not a religious state. Agudas Yisroel insisted on a Jewish entity that would maintain a basic halachic framework for Jewish continuity.

The Mizrachi tried to straddle both worlds. That didn’t work.

On Rosh Chodesh Kislev 5707/November 24, 1946, at a meeting between Harav Yitzchak Meir Levin of Agudas Yisroel and Moshe Sharett, head of the Political Department of the Jewish Agency, and Elazar Kaplan, a senior Agency official, Rav Levin asked that the new state follow Torah guidelines. The other two were not willing to guarantee more than educational autonomy and Saturday as the official day of rest.

It was clear to Rav Levin that the Agudah didn’t have the power to force the Zionists to agree to its demands, but he couldn’t take responsibility for breaking the wall of unity in the claims made against the British and the U.N.

So when an invitation came from the United Nations Commission of Inquiry to Agudas Yisroel, Gedolei Yisrael ruled that they should appear — for the purpose of protecting the interests of the Jewish people (14 Iyar 5707/May 4, 1947). In his historic speech, Rav Levin managed to articulate the line decided by Gedolei Yisrael.

The Agudah’s basic requirements to consent to the founding of a Jewish state were that marriage law, Shabbos observance, kashrus, and autonomy in education would be observed by the State.

Ben Gurion replied that the State constitution would be regulated by the Jewish State’s Legislative Assembly, and he refused to give any guarantees, even though he thought that there would be no problems with most of these requirements.

Rav Levin summarized the meeting as follows: “He spoke politely but did not promise a thing.”

Only 10 days later did the famous “status quo letter” reach the office of the Executive Committee of Agudas Yisroel. In it, Ben Gurion, Yitzhak Greenbaum and Rabbi Yehuda Leib Fishman guaranteed that the future state would observe Shabbos as a day of rest, and that the demands concerning personal affairs, kashrus and education would also be accepted.

Rav Levin nevertheless did not consider this letter a guarantee to fulfill Agudas Yisroel’s demands.

In a World Executive Committee meeting dated Rosh Chodesh Tammuz 5707/June 19, 1947, Rav Levin responded to the letter: “This letter does not actually say anything and does not include any real commitment.” …

Rav Levin tried to get further commitments from Ben Gurion, but the latter refused any additional guarantees.

Even though Rav Levin and the Agudah communal leaders knew that the new state would be run by secular Jews, their goal was to try to achieve the maximum conditions to protect religious liberties and the Jewish character of the nation under the existing conditions. Since he was a pragmatic person, Rav Levin tried to prevent Jewry in this fledgling entity from enduring spiritual dismemberment — on the heels of the Holocaust our nation had just endured.

Orthodox Jewry had many struggles ahead of it in the ongoing fight for the preservation of Torah principles. The status quo was never about the State of Israel becoming an entity that conducted itself according to halachah — it was immediately evident that this dream would remain elusive, but rather one that made it possible for Torah Jews to live in Eretz Yisrael, and in certain key areas such as marriage and kashrus, help the general populace retain a connection with Judaism.

Now, some 74 years later, the remnants of the fragile coexistence that has prevailed from the formation of that historic status quo agreement is once again under grave threat by the newly formed coalition of Lapid, Bennett, and company.

Our plea to those who are behind this mushrooming disaster is a simple one: The havoc you are about to wreak may prove to be irreparable, and the divisions you will cause may be too wide to heal.

All that we can do is express our anguish and cry out to Hashem. For He alone can save us.