Israel Rivlin in Romania: Israel Has the Right and Duty to Protect Its Citizens
Israel 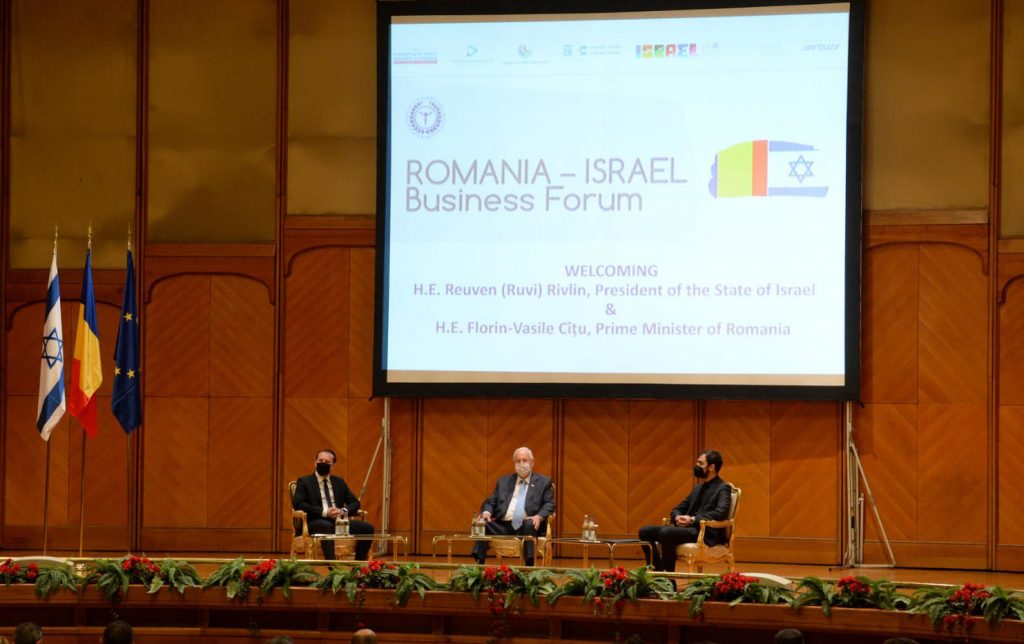 President Reuven Rivlin and Prime Minister Florin Cîțu of Romania on Wednesday opened a business seminar attended by the Romanian minister of economy, entrepreneurship and tourism, Claudiu-Iulius-Gavril Năsui, and a delegation of Israeli business leaders and industrialists who are accompanying the President, led by president of the Israeli Manufacturers’ Association Dr. Ron Tomer and head of the Israel Export Institute Adiv Baruch, and leading Romanian business and economic leaders.

“This economic seminar is of great importance. While government-to-government relations are a basis for official relations, business-to-business and people-to-people relations are the real basis for partnerships between people,” said Rivlin at the beginning of his remarks. “Economic cooperation between Israel and Romania has great potential, with mutual benefits for both countries. We have much in common. Israelis and Romanians are blessed with an entrepreneurial spirit, a deep belief in the value of education and a determination to overcome challenges. This shared human capital is a wonderful basis for cooperation on advanced technology, research and development.”

The President added, “The coronavirus pandemic emphasized the importance of international medical cooperation, and our health systems need to be adaptable and robust enough to overcome global threats. Israel, as you know, is a world leader in med-tech, including in the developing field of virtual medical systems. By working together, we can strengthen our hospitals and health systems and improve the welfare and resilience of our societies.” He noted the cooperation in the field of security and joint ventures within EU frameworks, saying he believed in bringing together Israeli innovation with Romanian capacity for the benefit of both countries.

At the end of his remarks, the President thanked the Romanian government and the Prime Minister for its “active support for Israeli-Romanian relations, the Israeli Embassy in Romania and the economic delegation for their excellent work in building bridges between the countries. I would also like to thank you, participants in this seminar, for your commitment to building effective and mutual economic bridges between our countries and friendship between our peoples.”

The Romanian Prime Minister thanked the President for his words, saying that Romania sees Israel – renowned as a nation of innovation – as an important business partner. He added that he was happy to see the interest of the business community and invited more business leaders and companies to take advantage of the opportunities.

The Romanian economy minister said he was grateful for the meeting and added that the Romanian business community sees this as an exceptional opportunity, wishing great success in realizing the potential of the partnership between the countries.

President of the Israeli Manufacturers’ Association Dr. Ron Tomer thanked the President for the business seminar, saying, “The last year was a particularly challenging one around the world, and Israel was no different. Israeli industry again proved that, at a time of crisis, it knows how to be creative and deliver quick and appropriate answers to the needs on the ground, using the world’s most advanced technologies and setting an example for other countries. I am sure that the Romanian government also understands the need for strengthening industry, and together we can create an environment that will strengthen us both.

“One of our goals is to expand and balance trade between our countries, so that Romanian imports and exports will grow and balance and lead the economic recovery of both our countries from corona. Now, as the world is slowly coming out of the crisis, I believe that there is great potential for developing business and political connections between our countries. Israel can increase the import of Romania’s high-quality and unique goods and can also increase exports to Romania in fields of expertise such as military and security industries, cyber, pharmaceuticals, digital medicine and more.”

Chair of the Israel Export Institute Adiv Baruch said, “The trade relationship between Israel and Romania are among the best in the world, and this visit is aimed at strengthening and widening cooperation particularly in the fields of technology and digitization. The EU has allocated Romania large budgets to continue developing its infrastructure and economy. Israeli industry can make a significant contribution to continued development in Romania. The President’s delegation is joined by 32 companies, led by the Israel Export Industry, in the fields of cyber, digital health, water, agriculture and more. The President’s visit is important in continuing the strengthening of relations between our countries and will allow Israeli companies in the delegation to have direct meetings with leading decision makers, both in the private and the public sectors. Economic cooperation is extremely valuable to both economics and is the way to continue to develop trade and economic links between Israel and Romania.”

Earlier, Rivlin addressed the members of Romania’s Parliament, saying, “Honored Members of Parliament, I would like to say to you today that like all democracies, the State of Israel is open to criticism. But we will not accept attempts to weaken us or undermine our right to exist through misuse of violence or international law.

“The Jewish people and the Israeli people in all its diversity have no conflict with Islam or the Arab peoples of the Middle East. We are fighting dark forces that aim to terrorize and destroy the State of Israel and its people. Iran’s regime of terror and those who collaborate with it in Lebanon and Gaza seek to undermine our right to exist. Israel has the right and the duty to protect its citizens – from the threat of nuclear weapons, from missiles and from terrorism.

“We must take steps on the ground to increase confidence between the two people, confidence that the other side wishes to live in peace, partnership and good relations, side by side. Any contrary actions harm our chances of success and make the vision of peace in the Middle East more distant.

“In a few days we will mark 73 years of friendly relations between Israel and Romania. Over those years, and until today, we have developed trade links, cooperated and shared knowledge over a wide range of fields – agriculture, water, health, high-tech, innovation and technology. We have so much more to learn from each other, to give to each other, to get to know each other, to work together, and I hope that the brave friendship between us only deepens.”

Following his speech, the Members of Parliament gave the President a long and heartfelt standing ovation in appreciation of his words.