Ferry With More Than 100 Aboard Runs Aground in New York

A passenger ferry with more than 100 people aboard ran aground in New York City and was taking on water Saturday, according to the Coast Guard and fire department officials. No serious injuries were reported.

The ferry operated by Seastreak, which runs routes between New York and New Jersey, lost power and steering on the East River just after 4 p.m., drifted into Bushwick Inlet in Brooklyn and hit ground, Seastreak said in a statement. The Commodore vessel was traveling from Highlands, New Jersey, to East 35th Street in Manhattan.

The Coast Guard and New York firefighters helped the Commodore crew get all 105 passengers to safety, Seastreak said. Rescue boats were brought in to help with the evacuation.

Seastreak said the cause of the mishap was a mechanical issue. It did not elaborate.

Video posted on social media showed the ferry listing to one side.

Fire department officials said one of the seven crew members was brought to a hospital with injuries that were not life-threatening.

First responders were removing water from the ferry, and a salvage company was called in to determine the best way to remove the vessel, fire officials said. 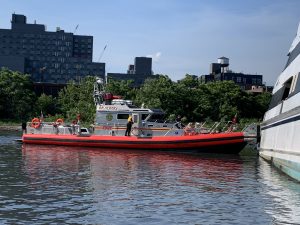 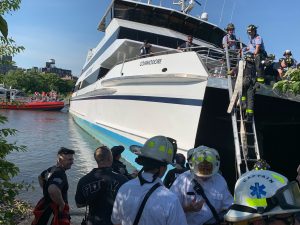 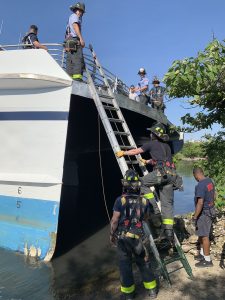