While the Likud issued no statement following Yair Lapid’s announcement that he reached a coalition deal with partners and has the backing of 61 MKs, party insiders say that “all is not lost” and that they pledge to continue efforts to counter the plan to remove Prime Minister Binyamin Netanyahu from power.

On Thursday, Netanyahu called an emergency meeting of the heads of the right-wing and chareidi parties in his bloc, as well as Knesset Speaker Yariv Levin and coalition chairman MK Miki Zohar.

The heads of the Yesha Council were also invited to the meeting.

The purpose of the meeting, according to reports, was to brainstorm ways to disrupt the new unity government before it is voted into office next week or the week after.

Likud MK Keren Barak said, “[Wednesday] we said that it’s not over until it’s over. Everyone can see that these seven parties [making up the coalition] have nothing in common. We plan to explain that to the public in the coming days.”

Yamina MK Matan Kahana said Thursday that Yamina MKs are “under tremendous pressure” to back out of the new coalition. “It’s everywhere. Social media, phone calls, protests outside homes – to the point of crossing some red lines. Some MKs feel their children are being threatened. The Prime Minister is definitely stirring the pot but not just him. They [political rivals] are spreading no effort to undermine us.”

Right-wing activists are also reportedly planning to step up protests outside MK Ayelet Shaked’s home, as she is seen as the “best bet” with respect to a Yamina MK who can oppose the new government at the last minute, thus preventing its formation.

“The national camp is waking up and returning to the streets,” one activist said. 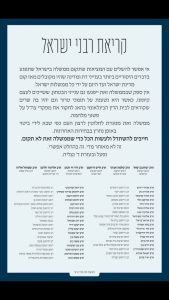 In related news, dozens of Rabbanim from the Religious Zionist communities signed a letter addressed to the Yamina MKs, calling for them not to support the new government.