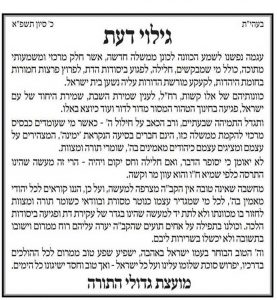 Disclosure of Our Opinion

We are saddened to hear that the intent to establish a new government where a central and significant portion of it includes those who Heaven forbid want to harm the foundations of religion and create a serious breach in the walls of Judaism, to puncture the heritage of generations that the House of Klal Yisrael rests upon.

The intention of these is severe, Heaven forbid, concerning Shabbos observance, preserving the uniqueness of Klal Yisrael, breaching the purity of our education which has been transmitted to us from generation to generation, and other similar things.

The wonder is increased seven-fold, and the pain of the desecration of Hashem’s name is great — when those who serve as the basis for establishing this government, they are part of the party who call themselves “Yaminah—The Right,” who declare themselves and present themselves as Jews who believe in Hashem and are observant of the Torah and mitzvos.

It is not to be believed, and if G-d forbid it comes to fruition – it is an act of defiance of Heaven and it is a serious and bitter offence.

Hashem does not combine a thought which is not good to an (improper) act. Therefore, we call upon all Jews who believe in Hashem, all who consider themselves as guardians of the legacy, and surely those who observe the Torah and the mitzvos, to return from these plans, and do not lend a hand to these acts which are considered uprooting the religion and a breach in the foundations of halachah. We all pray for our errant brethren that Hakadosh Baruch Hu should shower them with a spirit from in high, and they shall repent and not be led astray by their unrestricted hearts.

Hashem who chose Klal Yisrael with love, will dispatch an abundance of good from on High for all those who follow in his path; He should spread out his Succah of peace upon us and the entire Klal Yisrael — Only good and grace shall reach us for all the days.