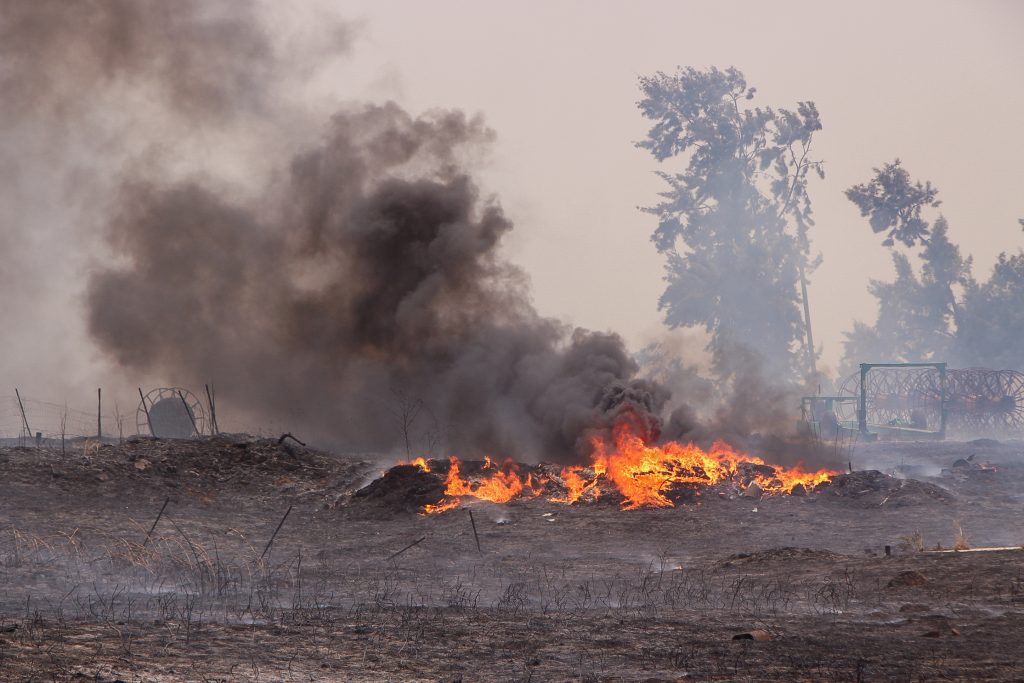 Israel was hit by a spate of wildfires Monday as the country experienced a dusty and dry heatwave that sent temperatures as high as 40 degrees Celsius (100 degrees Fahrenheit).

The Meteorological Service had warned Monday morning of a high to extreme danger of fires, which played out across the country as the day progressed.

In Beit Shemesh, a forest fire broke out shortly before 1 p.m. in the Ramat Beit Shemesh neighborhood, which set alight an apartment in a nearby residential building.

Seven fire crews were working at the site, two local apartment blocks were evacuated and the street was blocked to traffic. Almost simultaneously, a large fire was reported in the nearby Tzora Forest.

“On such extreme days, the speed and intensity of our response are critical,” said Eyal Cohen, the deputy commander of Yerushalayim District fire service. “In this case we have seen the fire spread not just in the forest but to homes as well, even skipping over a building to catch light on the other side in a way that threatens many people.”

There were no casualties in the blaze, but property did sustain some damage.

A short time earlier, five fire crews were called to a blaze raging in an open space in the Gedera area.

The Route 40 highway, which runs from Be’er Sheva, was blocked from the Kidron junction to the Gedera junction and police had begun evacuating houses on a nearby street. Firefighters soon took control of the fire, however, and the highway was reopened.

Another section of Route 40 between the Ahim junction and the Castina junction near Ashdod was blocked in both directions minutes later due to another brush fire.

The Nachshonim interchange on Route 6 was also closed due to a forest fire as five fire crews from Petach Tikva were dispatched to bring the blaze under control.

In the Kochav Yair area, firefighters managed to halt the spread of a blaze towards nearby orchards and in Tzur Yitzchak, they put out several fires close to the entrance to the community.

Three fires also broke out in the area of the southern city of Kiryat Malachi, and firefighting planes were deployed to tackle them.

Although the three blazes were not immediately doused, the National Fire and Rescue Authority said that the fires had been contained. Route 40 was again blocked to traffic in the area for a short time.

In Haifa, firefighters were also battling a brush fire that broke out between two streets in a residential part of the northern city, trying to stop the spread of the flames to local homes.

Firefighters were also called to deal with several fires near the community of Peduel.

Earlier in the day, five firefighters were operating in an open area in the Chevel Modi’in industrial zone, which led to a brief closure of Route 6 in the vicinity.