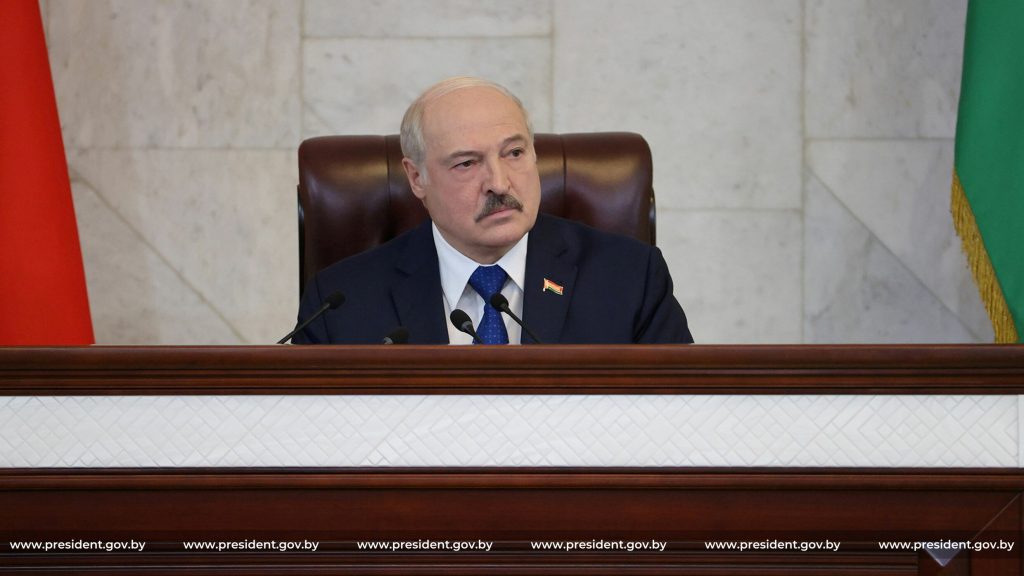 Belarus’s authoritarian president on Wednesday defended his action to divert a European flight that triggered bruising European Union sanctions and accused the West of waging a “hybrid war” to “strangle” the ex-Soviet nation.

On Sunday, Belarusian flight controllers ordered a Ryanair jetliner flying over the country to land because of a bomb threat, and a Belarusian fighter jet was scrambled to escort the plane to Minsk just before it was to land in Vilnius, Lithuania, from Athens, Greece. Once the plane landed, Belarusian security agents arrested Raman Pratasevich, a 26-year-old journalist and activist.

Belarus President Alexander Lukashenko denied that the fighter jet was forcing the Ryanair plane to land. He said it was an “absolute lie” and defended his action to divert the flight as a necessary response to the bomb threat.

“I acted in a lawful way, protecting people in line with international rules,” said Lukashenko, who has ruled the ex-Soviet nation with an iron fist for more than a quarter-century, relentlessly stifling dissent.

Outraged EU leaders quickly agreed to ban Belarusian airlines from using the airspace and airports of the 27-nation bloc, urged European airlines to avoid Belarus’s airspace and imposed sanctions on officials linked to the diversion. They said the bloc will introduce more sanctions targeting businesses that are the main cash earners for Lukashenko’s regime.

Speaking before lawmakers and top officials in Minsk, Lukashenko said the EU response was part of a “hybrid war” against Belarus.

“Our ill-wishers outside and inside the country have changed their methods of attacking the state,” Lukashenko said. “That’s why they switched from organizing riots to trying to strangle us.”

Lukashenko has faced unprecedented pressure at home with months of protests triggered by his re-election to a sixth term in an August 2020 vote that the opposition rejected as rigged. But he has only doubled down on repression, and more than 35,000 people have been arrested since the protests began, with thousands beaten.

“They crossed numerous red lines, and also limits of reason and morale,” Lukashenko said. “It’s no longer just an information war, it’s a modern hybrid war and we need to do everything to prevent it from spilling into a hot conflict.”

He threatened that Belarus would now retaliate by weakening its border controls halting Western-bound illegal migration and drug trafficking.

“We were stopping migrants and drugs — now you will catch them and eat them yourself,” he said.

Pratasevich, who left Belarus in 2019, has become a top foe of Lukashenko with a popular messaging app he ran playing a key role in helping organize the huge protests. After his detention, the 26-year old journalist was seen in a brief video clip on Belarusian state media late Monday, speaking rapidly to say that he was confessing to some of the charges authorities have leveled against him.

Pratasevich had been charged in absentia with staging mass riots and fanning social hatred. Those carry a prison sentence of up to 15 years, and some fear Pratasevich could face more serious charges, including some that carry the death penalty.