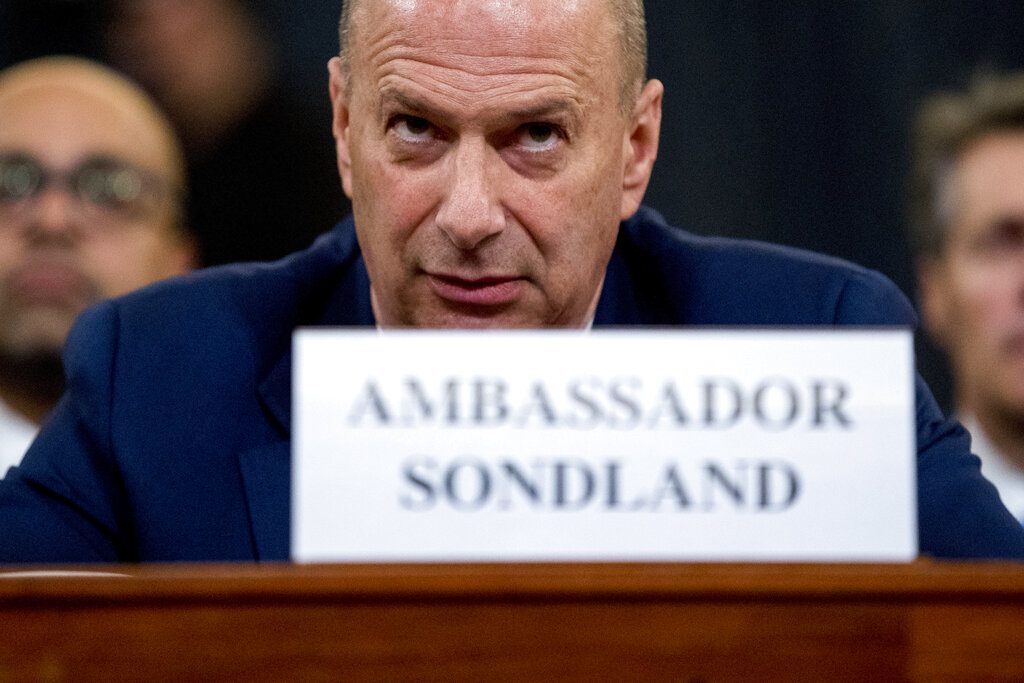 Gordon Sondland, the Trump administration’s ambassador to the European Union and a pivotal witness in 2019 impeachment proceedings, sued former Secretary of State Mike Pompeo on Monday in an effort to recoup $1.8 million he racked up in legal expenses.

Sondland alleges in the lawsuit, filed in federal court in Washington, that Pompeo had committed to reimburse his legal expenses after he was subpoenaed by House Democrats to testify in an impeachment case that accused then-President Donald Trump of withholding military aid from Ukraine while demanding an investigation into political rival Joe Biden and his son Hunter.

Instead, Sondland says, Pompeo “reneged on his promise” after learning the details of Sondland’s testimony.

“With the contractual commitment of Pompeo having been abandoned apparently for political convenience, Ambassador Sondland turns to this Court to reimburse his attorneys’ fees and costs and make him whole,” Sondland’s lawyer, Mark Barondess, wrote in his lawsuit.

A spokesperson for Pompeo called the lawsuit “ludicrous” and said Pompeo was “confident the court will see it the same way.”

In testimony that Sondland’s lawsuit describes as “highly fraught, highly charged and highly risky with tremendous consequences,” he described for investigators how Trump and his lawyer, Rudy Giuliani, explicitly sought a “quid pro quo” with Ukraine, leveraging an Oval Office visit for political investigations of Democrats.

Trump was impeached by the House but acquitted in February 2020 by the Senate.

Sondland was fired days after Trump’s acquittal “simply for telling the truth,” according to the lawsuit. He says the unwillingness to cover his legal fees not only represented a breach of commitment and “normal convention” but was also “especially problematic in this instance because the amount of preparation needed to comply with the subpoenas was staggering.”

“Ambassador Sondland retained a Washington, D.C. law firm well experienced in Congressional investigations that possessed the capacity to assist him, along with his long-time personal counsel, in preparation for his critically important testimony,” the lawsuit states. “Ambassador Sondland continued to rely on Pompeo’s individual promise, on behalf of himself and the Government, in seeking outside counsel and incurred nearly $1.8 million in attorneys’ fees and costs.”

The lawsuit was first reported by The Washington Post.