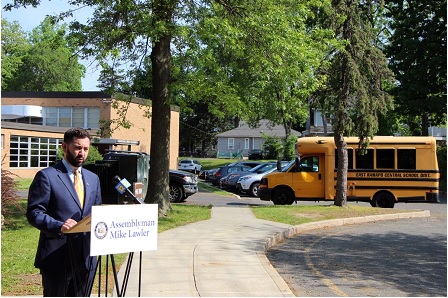 Assemblyman Mike Lawler (R,C,I,SAM-Pearl River) announced a new bill today, the Educational Equity and Choice Act (EECA), in an effort to solve some of the long-standing issues in the East Ramapo Central School District and in other districts with similar dynamics around the state.

“For years, the East Ramapo Central School District has been a source of controversy, anger and division in our community. It’s been a long, difficult journey to this point and my fear is, if we stay on the current trajectory, nothing will change. In fact, it may only get worse.

“It has to stop and we all must stop pitting one community against another. The simple truth is, every child in this district, regardless of whether they attend a public school or a private school, regardless of their parent’s income, and regardless of which community they live in, deserves a quality, fully funded education.

“Under my bill, the Educational Equity and Choice Act, or the EECA, those decisions and the funding mechanism would no longer be under the purview of the public school board, rather New York State and the State Department of Education would be fully responsible for funding those mandated services.

“As we’ve seen in the East Ramapo Central School District, this issue is a flashpoint and can cause significant, unnecessary division between different communities. The EECA would remedy that almost entirely, allowing for private schools to work directly with the New York State Education Department on issues of funding for mandated services such as busing, textbooks, and others.

“It would also mean that the sole focus of the public school board would be to ensure that the public school students receive the fully funded, quality education they deserve. This bill, in conjunction with other measures, will help ALL of the students in the East Ramapo Central School District by ensuring a steady, consistent stream of funding for both public and private schools.

NOTE: Assemblyman Lawler has introduced two versions of the bill, one that would apply statewide, and one that would only apply to districts where 65% or more of the students residing in the district are enrolled in private schools.