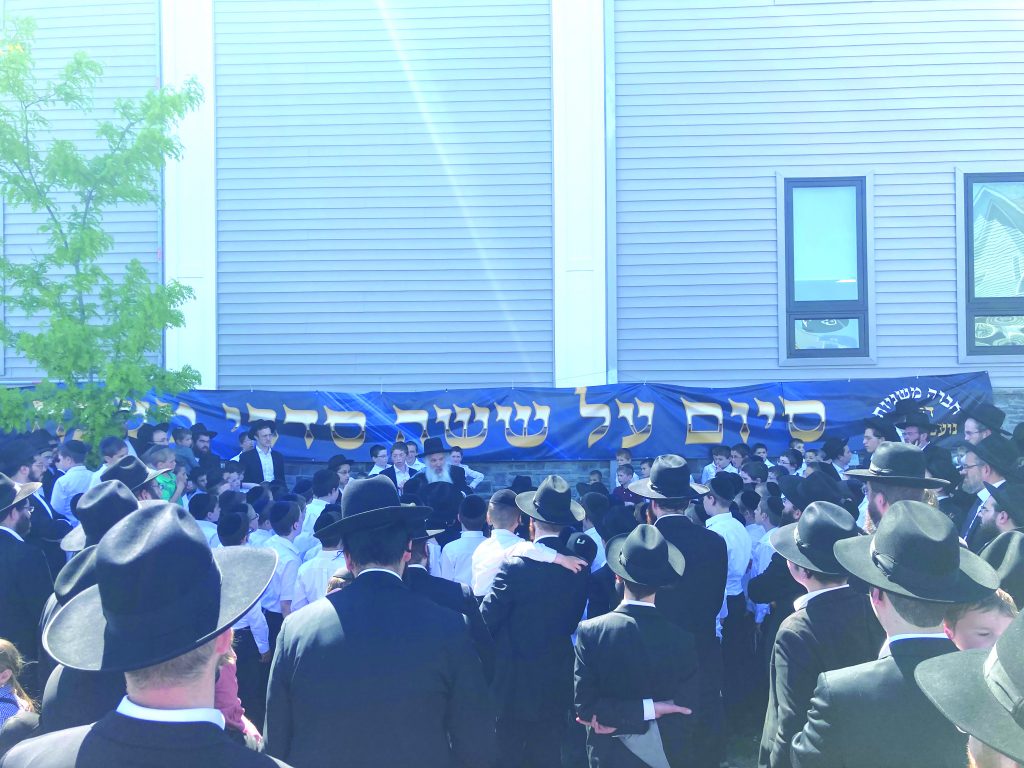 With their innovative and heart-warming Mishnayos drive, the boys of Prospect Vines in Lakewood have been leading the way.

A Change of Plan

After last year’s COVID restrictions, the 5781 annual hadlakah at the Prospect Vines development off Prospect Street promised to be better than ever before. For weeks the boys had been collecting wood; even the fallen clubhouses — built during the pandemic — joined the ever-mounting pile. Everyone was looking forward to the joyous occasion.

And then tragedy struck. As news got out about the Meron disaster on the evening of Lag BaOmer, bonfires all over Lakewood were cancelled out of respect to the sadness of the hour. There really was no other choice.

Naturally, the organizer of the fire, Rabbi Zevi Reisman, was fully behind this decision, and in place of the planned hadlakah, he announced there would be an alternative Lag BaOmer celebration, where there would be a different type of program without music, dancing and a fire.

Even so, he didn’t feel this was enough; he wanted to give a positive spin to the tragedy in a way that the boys could grow from it. Sending them home empty-handed simply wouldn’t do; he needed to give them something more.

The person to ask was the Rav.

A Conversation With Harav Miller

After asking Harav Yitzchok Miller, the Rav of Prospect Vines, about rescheduling the fire, the Rav’s answer to Rabbi Reisman was categorical: the fire would have to wait until the Sheloshes Yemei Hagbalah, the three days before Shavuos when music and dancing are allowed.

That was straightforward enough. The Rav’s next words, however, were more puzzling: as well as the fire, they could also make a siyum.

Siyum! What siyum? There had been no talk of making a siyum on Lag BaOmer. And there were only two weeks left until the rescheduled fire … what sort of siyum could they make?

What happened next is best described by Rabbi Reisman when he says, “Hashem put an idea in my head.” As a result, he came up with the truly brilliant plan of assigning a perek of the 524 Mishnayos in Shas to each of the 400 or so (second- to eighth-grade) boys in the complex (with some boys learning two). In this way, they would finish Shishah Sidrei Mishnah by the end of the Meron sheloshim.

But there was still one problem; it was already early Lag BaOmer morning, and the plan had to be ready to implement at the “substitute” Lag BaOmer gathering a few hours hence. As yet, nothing had been done!

With only a few hours left, Rabbi Reisman contacted another resident, Rabbi Yisroel Levitan, and asked for his help. (Rabbi Levitan is the yungerman who established Prospect Vines. As someone who wanted to live in a community where the authority of the Rav would be sacrosanct, he looked for a Rav before he looked for a developer. In fact, Rav Miller was appointed Rav of Prospect Vines even before a single brick has been laid.

Rabbi Levitan was eager to come on board and so was his wife, who has a talent in graphics. By the time the gathering was called for, they’d drawn up an attractive chart listing all the perakim of Mishnayos, ready for the boys to sign up for their perakim.

But would the boys want to take on this extra learning? In the intervening hours, Rabbi Reisman had also called storyteller Rabbi Yechiel Spero to ask him to suggest a story that would entice the boys to join the project. In turn, Rabbi Spero provided him with an impressive tale about the power of Klal Yisrael when they work as a whole.

Perhaps it’s needless to say that the story worked its magic, and within an hour or two, over 500 boys had agreed to learn the entire sequence of Mishnayos in a very short period of time. Not one boy abstained!

At the time of writing — not long before the siyum — the boys have completed all of Shishah Sidrei Mishnah and excitement is running high. And it’s not only because of the siyum. The entire two weeks have been an exhilarating experience for the boys as they learned their perakim and went on to plan their siyum (for which they have energetically collected funds from families in the complex).

Furthermore, not only the boys who’ve learned Mishnayos are invited. “It’s a big simchah for our complex,” explains Rabbi Reisman. “It’s for everyone — we’re all part of it.”

But none more so than the boys themselves. Mrs. K., mother of three sons involved in the project, says she’s been astounded by the diligence of her boys (even the son who shrinks from doing his homework). She also comments that learning the Mishnayos l’iluy nishmas the Meron niftarim has given them a more mature sensitivity to the pain of Klal Yisrael.

Another mother, Mrs. W., meanwhile speaks of the wonderful comradery between the boys that the program has fostered, and feels that it has been especially appropriate in the weeks leading up to Shavuos.

“We’ll be having our own Simchas Torah just before Shavuos,” said Rabbi Reisman on the eve of the siyum, revealing that the Rosh Yeshivah Harav Dovid Schustal, shlita, will be addressing the crowd. “I can’t think of a better way to prepare for the Yom Tov of Kabbalas HaTorah!”

Postscript: (Written on the Day of the Siyum)

In spite of the excitement surrounding the long-awaited fire, it seems that it will not be lit today after all. Due to recent outbreaks of forest fires in the area, it was announced this morning that a permit has not been issued.

A source in Prospect Vines reports that this time the cancellation of the fire has not caused any disappointment among the boys. In fact, the fire had already taken a back seat in the festivities. It is the siyum celebrating the completion of Shishah Sidrei Mishnah that really counts!

In view of the outstanding success of the program, Prospect Vines will be continuing it on a monthly basis, completing the Shishah Sidrei Mishnah each month as a merit for the Meron kedoshim. Several shuls have already expressed interest in establishing a similar program in their own areas.