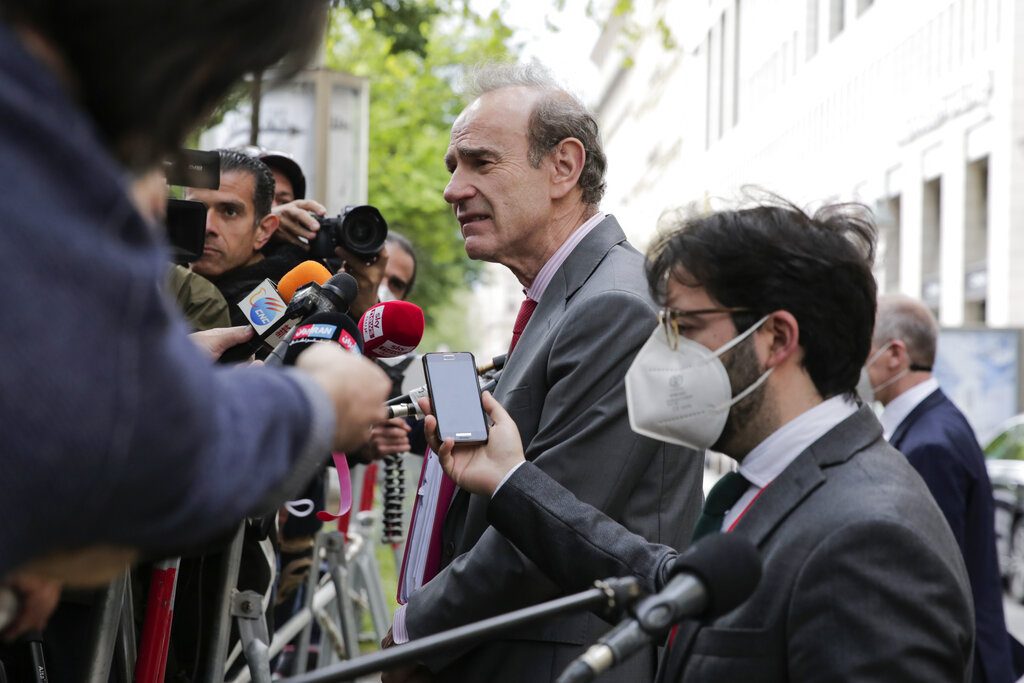 World powers met Wednesday for new round of high-level talks on bringing the United States back into the nuclear deal with Iran amid growing hopes that an agreement might soon be within reach.

Enrique Mora, the European Union official who chaired the talks between Russia, China, Germany, France, Britain and Iran told reporters “we have made substantial progress” though there were “still things to be worked out.”

“I will not venture a date because you never know, but I’m quite sure there will be a final agreement,” he said.

The nations have been trying to resolve the major outstanding issues on how to return the U.S. into the landmark agreement, which then President Donald Trump pulled Washington out of unilaterally in 2018.

Russian delegate Mikhail Ulyanov tweeted after the talks that participants had “noted that ‘good’ or ‘significant’ progress was made and that an agreement was ‘within reach.'”

Before the talks, Iran’s delegate, Deputy Foreign Minister Abbas Araghchi, said there had been good progress, but that several key issues needed further assessment and would be brought back by the diplomats for discussion with their governments at home.

The sides agreed to reconvene the talks in Vienna next week.

German Foreign Minister Heiko Maas told reporters in Berlin that there had been “concrete results” that he wouldn’t detail in public, but which gave him hope for a resolution soon.

“I cannot predict how it will end up, because ultimately the results of the negotiations will be assessed again in the respective capitals and then approved or not,” he said. “But our goal is to achieve a result in the negotiations in the next two weeks and thus create the conditions for the U.S. to return to this agreement.”

The U.S. hasn’t been represented directly at the talks, which started in early April, but does have a delegation in Vienna and representatives from the other countries have been shuttling between it and the Iranian side.

The 2015 deal, known as the Joint Comprehensive Plan of Action, or JCPOA, promises Iran economic incentives in exchange for curbs on its nuclear program.

The ultimate goal is to prevent Iran from obtaining an atomic bomb, which it insists it doesn’t want to do. Trump pulled out in 2018 saying it wasn’t broad enough in scope and needed to be renegotiated.

He embarked upon a campaign of “maximum pressure” aimed at bringing Iran back to the negotiating table, reimposing sanctions that have crippled Iran’s economy.

Iran has refused to engage in any direct talks with the U.S., however, and has instead been steadily violating the restrictions of the JCPOA, like enriching uranium to a greater purity than permitted, stockpiling more enriched uranium than allowed and using more advanced centrifuges, to try and pressure the other powers for economic relief.

U.S. President Joe Biden says he wants to rejoin the deal, but that Iran needs to return to full compliance.

Iran has said it’s willing to roll back all violations, but has insisted that Washington must drop all sanctions imposed by Trump, including ones put in place for reasons other than its nuclear program.

The talks in Vienna have been focusing on how to bring Iran back into compliance — including what would be done with the newly-installed advanced centrifuges — and which sanctions the U.S. would agree to remove and when.

“There is a fundamental willingness (from Washington), but, of course, it depends, in turn, on Iran complying with the commitments it is clearly violating,” Maas said. “And that is a very arduous process.”

If the two sides are able to reach an agreement in the next two weeks, it would come before Iran’s June 18 presidential election, which some believe could complicate further discussions.

Mora said he thought that an agreement before the vote was “doable.”

He added that Iranian representatives were meeting separately with the International Atomic Energy Agency in Vienna for talks on extending a temporary deal on the agency’s inspections of Iranian nuclear facilities.

As part of its ongoing pressure, Iran in February began restricting international inspections of its nuclear facilities, but under a last-minute deal worked out by the IAEA on Feb. 21, some access was preserved.

Under the agreement, Iran said it would no longer share surveillance footage of its nuclear facilities with the IAEA, but promised to preserve the recordings for three months. It will then hand them over to the IAEA if it is granted sanctions relief. Otherwise, Iran has vowed to erase the them.

The end of that three-month window is Friday.

Mora said he didn’t have details of the discussions, but many expect that Iran will extend the deadline so as not to jeopardize the main JCPOA talks.