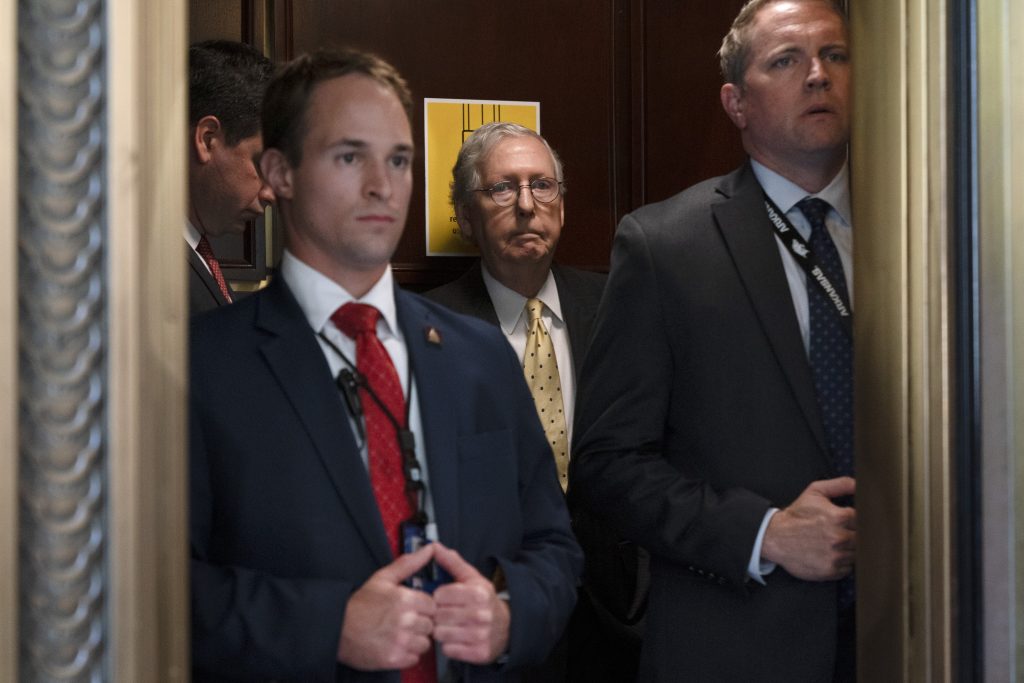 Congressional Republicans are divided over whether to support the creation of an independent commission tasked with investigating the Jan. 6 breach of the Capitol.

House Minority Leader Kevin McCarthy, R-Calif., on Tuesday announced his opposition to a bipartisan deal to establish a panel divided equally between Republican and Democratic appointees, arguing that the commission should be looking into other acts of politically charged violence as well. He charged that the proposal, which will be voted upon Wednesday, was “shortsighted,” “duplicative” and “potentially counterproductive,” focusing his blame on Speaker Nancy Pelosi, D-Calif. Several Republicans — including the top GOP member of the House Homeland Security Committee — have endorsed the measure.

Senate Minority Leader Mitch McConnell, R-Ky., said that the Senate GOP is “undecided” about whether to back the commission and is “willing to listen” to arguments in favor of the panel.

“We want to read the fine print,” McConnell told reporters. “If the majority leader puts it on the floor, we will react accordingly.”

Senate Majority Leader Charles Schumer, D-N.Y., said Tuesday that he would bring the legislation up for a vote.

McConnell gave a caveat to his comments and said the two issues being scrutinized by Senate Republicans are whether the commission would potentially interfere with law-enforcement efforts to identify and prosecute people who took part in the attack, and whether it is set up to allow for a bipartisan investigation, particularly based on how staff would be chosen.

He noted that “hundreds of arrests” had already been made in relation to the Jan. 6 assault, in which approximately 10,000 people came to the Capitol and about 800 broke inside, vandalizing the building as they searched for lawmakers, including Pelosi and Vice President Mike Pence.

But the fact that McConnell left the door open to backing the commission after consulting with his rank and file suggests there may be enough Republican votes to pass the legislation in that chamber.

Several Republicans, including some who voted this year to convict Trump on impeachment charges for inciting the riot, indicated this week that they are open to backing a commission. Sen. Mike Rounds of South Dakota, who did not back Trump’s impeachment, told NBC News on Tuesday that he was for a commission because “I don’t want it to be swept under any rug.”

In the House, the Republican coalition supporting a commission had expanded beyond those who voted for Trump’s second impeachment, as well.

“Right now I’d like to vote for it,” said Rep. Don Bacon, R-Neb., who opposed impeachment and has become a top target for Democrats trying to flip seats in 2022. “I don’t mind having transparency and putting a spotlight on what happened — I think it’s all right.”

Pelosi is expected to have enough support to pass the commission legislation as well as a supplemental spending bill to pay for improvements to Capitol security, when it comes to a vote Wednesday.

The commission vote will be a litmus test for how willing Republicans are to dissociate themselves from Trump’s lingering shadow over party politics and risk his wrath.

“Republicans in the House and Senate should not approve the Democrat trap of the January 6 Commission. It is just more partisan unfairness and unless the murders, riots, and fire bombings in Portland, Minneapolis, Seattle, Chicago, and New York are also going to be studied, this discussion should be ended immediately,” Trump said in a statement Tuesday night. “Republicans must get much tougher and much smarter, and stop being used by the Radical Left. Hopefully, Mitch McConnell and Kevin McCarthy are listening!”

While Trump is opposed to an independent Jan. 6 commission, he has not gotten directly involved in McCarthy’s efforts to block it, according to a person who has spoken directly to him about the matter.

The former president has complained that law enforcement has been more vigorous in dealing with rioters Jan. 6 than they were during Black Lives Matter protests last summer, according to people familiar with the matter.