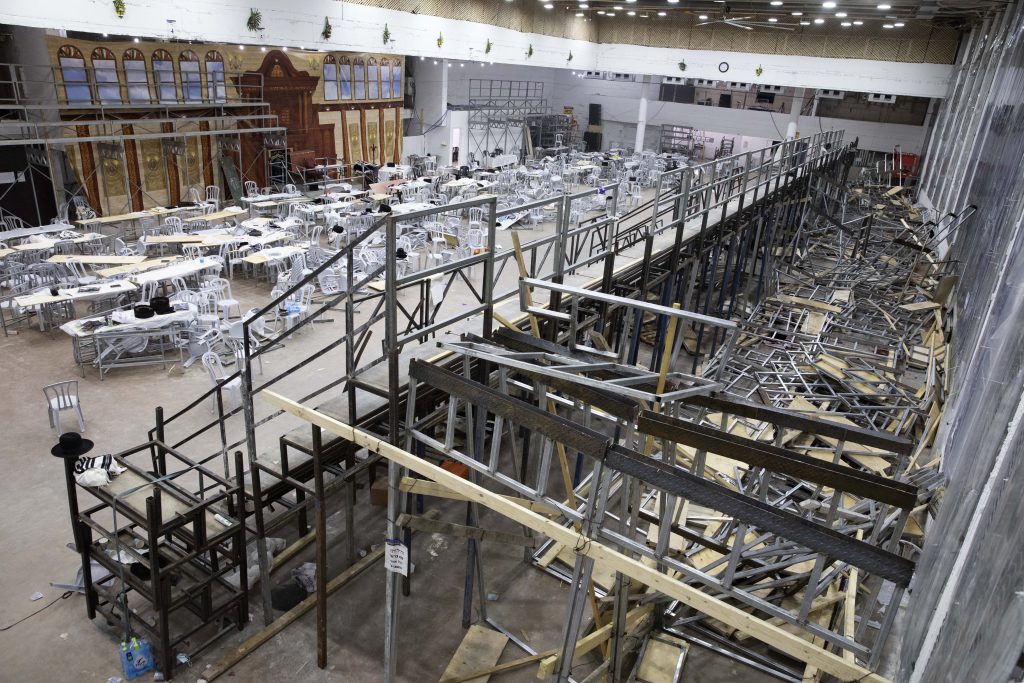 Hundreds of mispallelim had gathered at the new Karlin-Stolin beis medrash in Givat Ze’ev just before the start of Shavuos. Bleachers (parenches) had been set up and hundreds of bachurim were standing at the upper levels when the top level suddenly collapsed, causing a domino effect and plunging hundreds to the floor. Two people were killed and dozens injured, some critically.

Reb Mordechai Binyamin Rubinstein, z”l, 23, of Yerushalayim, is survived by his wife and infant child. The other victim was habachur Meir Gloiberman, z”l, 13, from Beitar Illit.

Habachur Meir Gloiberman was bar mitzvah just a few weeks ago, on Shevi’i shel Pesach. His parents, lhcbh”l, Reb Yehudah Leib and Perel Gloiberman, live in Beitar Illit and had hoped to raise him in the ways of Torah, but alas, his life was cut short.

Both niftarim are survived by parents, grandparents and siblings.

“This is a Chassidic kehillah that is known to all for its emphasis on safety. This came to the fore in particular over the past year, with their strict adherence to all the corona restrictions — which even brought them a degree of scorn from others who were lax about this,” said Givat Ze’ev Deputy Regional Council Head Yitzchak Brener, noting that almost every family within this Chassidus has some member who was involved in this tragedy. Brener also noted that a police investigation is underway as to the cause of the tragedy.

At the end of Shavuos, spokesmen of the community announced that they will cooperate fully with the police investigation. They stressed that whatever fault could be found in the bleachers should not be imputed to the new building, which, they said, had already received the required permits, news sources reported.

The bleachers collapsed just as mezuzos were being placed on the new building, where all of the Yom Yov tefillos were to be held. Instead, minyanim were held in the Chassidus’s old beis medrash and other shuls.

Hundreds of MDA and Hatzolah volunteers rushed to the scene to treat the many injured. One hundred and ninety-four people were evacuated to hospitals. Five were in serious condition and 10 in moderate condition. Many of the lightly injured were released from the hospital on Monday night (the end of Shavuos in Eretz Yisrael). Eighty-four victims remained hospitalized.

Hatzolah members were among the hundreds present at the moment of the collapse, and they began immediately in evacuating the wounded, many of whom had lost consciousness. A Hatzolah ambulance had been stationed outside the beis medrash beforehand.

“All of the relevant agencies responded to handle the wounded,” said Brener. “Helicopters transported the more severely wounded. It took several hours to evacuate all of the wounded. The road that serves this area is narrow, and was even more narrow because there were so many parked cars there.”

The Karlin-Stolin Rebbe remained at the scene of the collapse, overseeing the evacuation of the wounded. After all were evacuated, he davened Maariv in the Chassidus’s older beis medrash in Givat Ze’ev. Afterwards, he announced: “We managed to get through the past year [of COVID] without losses, as we were careful at all times. We managed to get through the disaster in Meron, even though the [Divine] decree was on all of Klal Yisrael, but ‘from where can I flee from You?’ It is impossible to run away from the decree. It’s impossible to hide. The decree was upon us as well.”