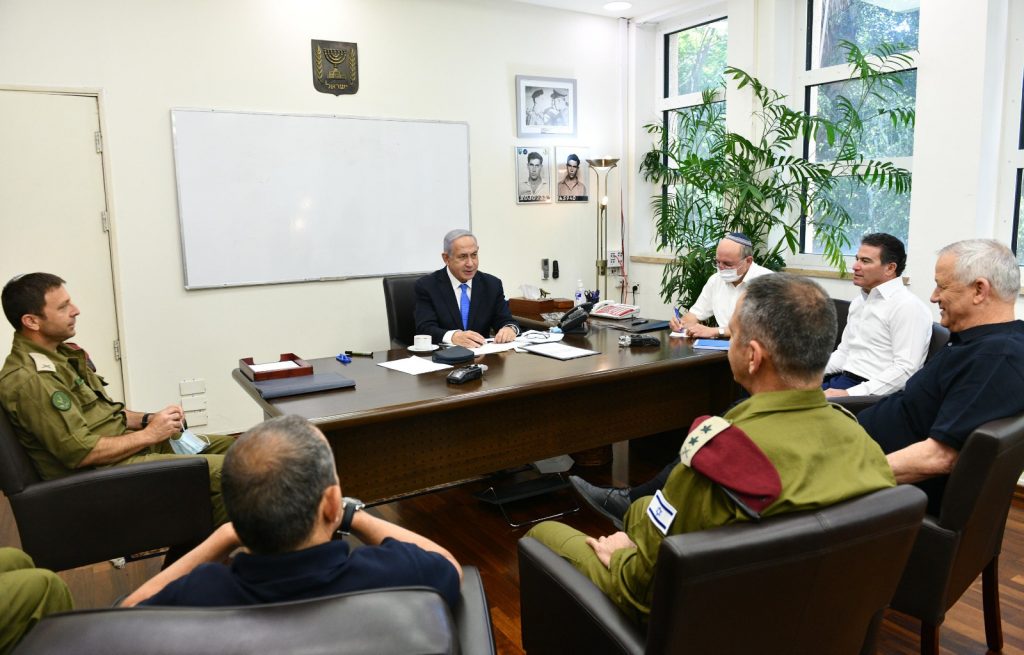 I would like to start with a personal request from each and every one of you to take care of yourself and adhere to the Home Front Command’s instructions – the lives of dozens of civilians were saved because they stayed in the protected areas and acted according to the command’s instructions,”

We will provide all civilian assistance to the residents of the south and to all citizens of Israel.

On the eve of the Yom Tov, it is an opportunity for every public leader to wake up, and it is time for each of us to treat each other as brothers and soothe the spirits within us.

Unity and civic resilience are the leading challenges of these days.

Citizens of Israel, as chief of staff, together with the prime minister and defense minister and the entire IDF, we led the IDF fighters to destroy the Hamas attack tunnels that endangered the residents of the envelope.

As Minister of Defense I had the honor of completing the underground barrier.

In recent days, the IDF, under the command and leadership of Chief of Staff Aviv Kochavi, has turned the Gaza tunneling network, the weapons tunnels and the underground hideouts into a death trap.

From “Hamas Metro” – is to “Train to Hell”. It is a strategic achievement in the war against Hamas that breaks its perception and its doctrine of warfare.

A long time ago, we held a series of discussions in the defense establishment and in the IDF, the purpose of which was to prepare plans that would break Hamas’ tunnel and operation system, plans that would harm it, its people and its leaders, and so it was.

The destruction of the underground found them unprepared, senior Hamas figures are fleeing from hiding place to hiding place, and Gaza residents understand that they have been taken hostage by terrorist organizations.

I would like to emphasize the goals of the operation – to bring long-term peace, strengthen the moderate forces in the region and deprive Hamas of strategic capabilities.

As I also said this morning to the members of the American delegation and yesterday to my friend Secretary of Defense Lloyd Austin, there is no sovereign state that would not react like Israel to a terrorist organization that fires indiscriminately at its citizens.

It is not only our right, it is also our moral duty.

We do this in accordance with international law and exercising discretion.

And as we have always done – we will act with security responsibility and political wisdom.

Our eyes are open to all sectors, and we are prepared to provide an operational response to anyone who investigates us.

On the eve of Shavuot, I would like to express my thanks on behalf of all Israeli citizens and on my behalf, to the GSS members, IDF soldiers and commanders, headed by the Chief of Staff, who are on guard and fighting at this time, for Israel’s security.

Alongside them – we must also thank the police, local authorities and the rescue and emergency organizations that stand on the various fronts.

Together – we win, together we will win.

Have a happy and secure Shavuos.