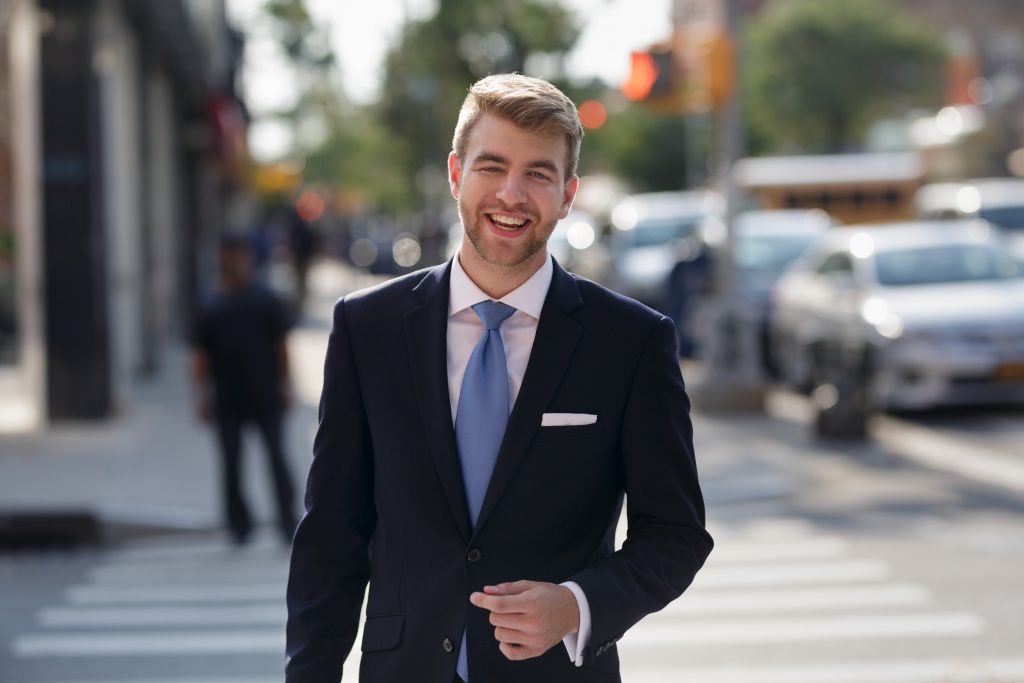 Steven Patzer may be only 24 years old, but he’s crammed a significant amount of community activism and programming since he announced his campaign for the 47th district of the City Council in 2019.

“I think I’m uniquely suited to do this because I’m running on a philosophy of neighborhoods shaped by our actions, not just our opinion,” Patzer told Hamodia.

Patzer previously worked for the Simon Wiesenthal Center, pushing hate crime legislation and running school programs that encouraged outreach and empathy, before leaving to help care for his mother, who had fallen ill. Having grown up in Brooklyn and benefited from a variety of community organizations, Patzer is an advocate of programs that will empower parents and allow children to flourish, city funding for improved housing, cutting red tape for small businesses, and connecting communities with police to improve public confidence and safety. He wants to halt the crime and fear pervading Brooklyn throughout the pandemic and bring the city back with better opportunities for families and businesses.

“We need to restore faith in public safety and our educational system,” Patzer said.

A self-described moderate Democrat, Patzer had been involved in community organizations from after-school programming to food boxes while running his campaign. When the pandemic hit, he pivoted to addressing newly urgent needs, such as supplying police with PPE, organizing rallies to support Asian-American businesses being discriminated against and holding virtual job fairs for the newly unemployed.

He was the “only candidate out there during the first day of the pandemic,” Patzer said, “delivering food boxes to our seniors and filling gaps that the government missed, like raising money for PPE donations to our first responders in the police department and our hospitals. Every single Brooklyn hospital got food and PPE materials from us, and every single southern Brooklyn police precinct got food and PPE materials from us.”

Though he may have little experience in office, he and his team have held more than 65 events since declaring his campaign, while “people twice my age with three to four times my experience haven’t shown that,” Patzer said. “I feel the best way to vet a candidate is to see what they’re doing on the campaign trail; if they’re just asking for your vote in return for something later, that may not be someone with the biggest heart in the race.”

Growing up, Patzer thrived in the public school and CUNY systems, but he was all too aware of those who struggled. He watched his mother fight for years to access services on behalf of his brother, whose learning disability was going unaddressed. From this experience, he is in favor of increasing funding for special education and offering parents more options for their children in the form of charter school vouchers and stipends, including for parents who send their children to private schools.

“Why is it a radical idea to want the best for your kids?” he wondered. “Send them elsewhere, and if you can’t afford it, why should the city deny that right?”

He praised the yeshivah system, noting that the public school system would “have probably collapsed by now” if all New York City children tried to attend the public school. “We have to work with [the private schools], we don’t see them as our adversaries,” he said. “It’s another reason why the voucher program would make a lot of sense [for] parents…sending their kids to a school where they feel they’ll get the best education, and that should be what’s on your mind…And if our private schools in New York are giving a better education than public schools, then it is your right as a New Yorker to want to send there and to have access to that.”

Additionally, Patzer hopes to gain Council funds into programs that would benefit children and inspire them. He would push for funding for community centers that would be safe places for children to go to after school to study and play. “This is an investment in our kids that will always pay dividends,” he said. He also knows, from personal experience, that city department outreach programs to neighborhood youth can build bridges and mutual understanding.

When meeting with a police officer through the NYPD Explorers program for students, Patzer said the officer “taught me from a very young age what police have to go through to keep our communities safe. He gave me an entirely different outlook on the police department.” Programs such as those can ease the tensions between communities and police, and encourage young people to consider jobs in their communities.

He is staunchly opposed to the defund the police movement; he personally knows many people who moved from Brooklyn out of fear. “Officers are afraid to engage, officers are afraid to do their job,” he warned. “The NYPD really needs more funding and to hire more people. Because if you order Uber Eats and you call 911, your food will almost certainly get to you first. We need to hire more officers so we can respond to these calls,” he said.

Of all the events he held during his campaign, the one he’s especially proud of was the annual holiday toy drive for children in public housing.

“Every year, they give the same toys,” he said. “There’s nothing empowering about it, it’s really just checking a box, they couldn’t afford toys, they got toys, and we’re moving on with our lives, which is a great start. But we wanted to think bigger.”

He and his team created a special giveaway, and invited teachers, engineers, firefighters and police officers to present the children with toys specifically related to those careers, and the children were able to choose a toy based on what they dreamed of being when they grew up. He saw children who might have otherwise been afraid of police excitedly playing with police toys. “Those kids need the most impact and oftentimes, government just checks the box and puts the bandaid on issues and not fixing systematic issues,” Patzer said. “So we made a little bit of a difference.”