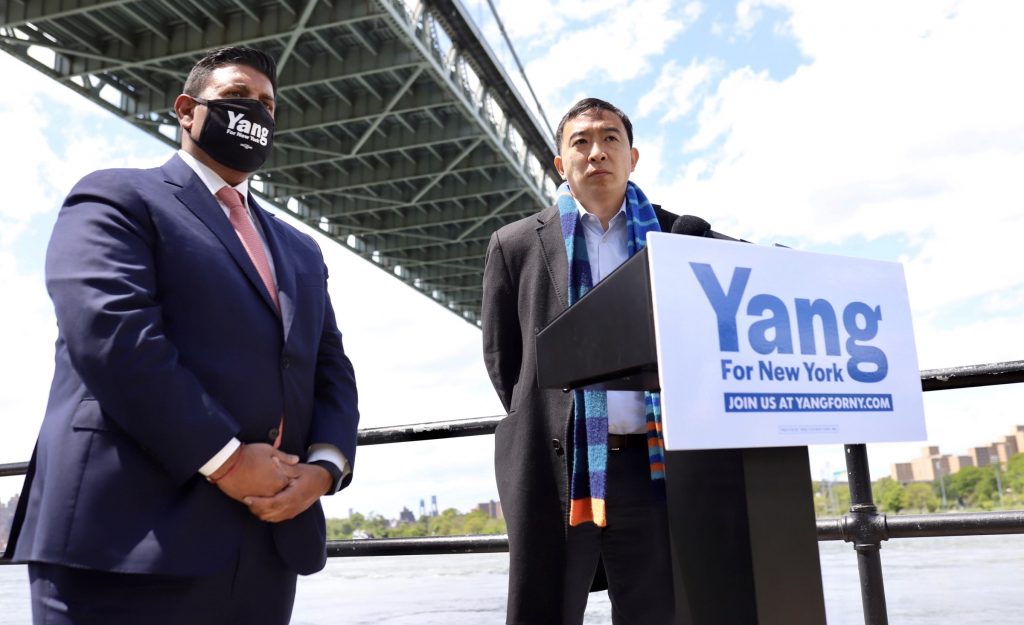 Six thousand miles from the rockets and the riots, the violence flaring in Israel and Gaza is roiling the New York City mayoral race.

Candidates for Hizzoner of The Big Apple tweeted solidarity with Israel this week, drawing praise from Israel supporters and condemnation from Israel opponents.

At 6:11 p.m. Monday night, as Israelis cowered under a Hamas rocket barrage, Ray McGuire, a longshot Democratic candidate for New York City mayor, tweeted, “In the last 24 hrs, over 100 rockets were fired at Israel by terrorists in Gaza. Millions of Israelis are currently under threat. The United States & the entire international community must stand unequivocally with Israel. On this Yom Yerushalayim, I stand proudly with Israel,” and included an Israeli flag in the tweet.

Reaction was swift from both sides. Orthodox activist Chaskel Bennett commented, “Thank you Ray,” while another commenter wrote, “Right wing settler-state pandering … I’m waiting to see which Mayoral candidate tops him. Sadly, i think there will be more than a few.”

At 7:28 p.m., Andrew Yang, one of the leading candidates, who has received endorsements from a slew of Orthodox Jewish elected officials, and Chassidic and yeshiva leaders and administrators, tweeted, “I’m standing with the people of Israel who are coming under bombardment attacks, and condemn the Hamas terrorists. The people of NYC will always stand with our brothers and sisters in Israel who face down terrorism and persevere.”

Thirty minutes later, Eric Adams, another leading candidate, who currently serves as Brooklyn borough president and has long-time ties to Orthodox communities in Brooklyn, tweeted, “Today on Yom Yerushalayim, Israel came under attack from Hamas-fired rockets in Gaza. Israelis live under the constant threat of terrorism and war and New York City’s bond with Israel remains unbreakable. I stand shoulder to shoulder with the people Israel at this time of crisis.” Half an hour later, the tweet was deleted, but it was re-posted at 9:07 p.m.. An Adams campaign spokesperson told Hamodia, “We were told there was a typo. We took it down to make sure there were no mistakes, and then re-posted it.” While the tweet did have one typo — “people Israel” instead of “people of Israel” — it was reposted verbatim.

The tweets about Israel combined for tens of thousands of likes, retweets, and comments, mostly on the Yang tweet, as he has the largest social-media following among the candidates.

One Israel opponent wrote a vulgar response that accused Yang of “vile pandering to right wing zealots,” among many tweets critical of the candidate, and the hashtag #YangSupportsGenocide began trending on Twitter. One commenter who defended Yang wrote, “There’s no moral equivalence between Hamas’ religious dictatorship shooting rockets at the Jews, Christians & Muslims in Jerusalem (& apparently rockets fell short & killed Gazans too) & Israel trying to stop those rockets.”

Adams also got reaction from both sides. Former Councilman Chaim Deutsch commented with a series of “applauding” emojis, and another Jewish commenter wrote, “Thanks for your support. New Yorkers stand behind you.” A Muslim commenter responded with criticism of “NY mayoral candidates rushing to Israel’s defense. But nothing on Palestinians evicted from East Jerusalem. Nor, on Israeli violence against worshippers at Aqsa on one of the holiest nights of the Muslim yr. How many dead Gazan kids does it take to illicit [sic] sympathy?”

Negative reaction to the support of Israel spilled beyond Twitter.

A video on social media showed someone burning an Eric Adams poster.

On Tuesday, at an event in Astoria where he was endorsed by State Sen. Jeremy Cooney, Yang was heckled by opponents of Israel, with one accusing the Jewish State of “bombing civilians in Palestine,” and another saying, “you don’t speak for us, you do not represent us” and accusing him of “seeking support from people that are alt-right white supremacists.”

Yang had been scheduled to distribute groceries in Astoria ahead of Eid, but organizers then uninvited him, and Rep. Alexandria Ocasio-Cortez, (D-N.Y.) of Queens, one of several progressive Congressmembers critical of Israel, tweeted, “Utterly shameful for Yang to try to show up to an Eid event after sending out a chest-thumping statement of support for a strike killing 9 children, especially after his silence as Al-Aqsa was attacked. But then to try that in Astoria? During Ramadan?! They will let you know.”

Republicans including Sen. Ted Cruz and, Stephen Miller, a former advisor to President Donald Trump, tweeted praise for Yang, with Miller lauding the presidential candidate “for taking a clear stand against terrorism,” and Cruz writing “Bravo to Yang for opposing the rabidly pro-Hamas & anti-Israel attacks from fellow Dems Omar & Tlaib,” referring to U.S. Reps, Rashida Tlaib (D-Mich.) and Ilan Omar (D-Minn.). But the candidate disavowed their defense, saying at Tuesday’s event, “I certainly would never ask for or want their support,” according to NY1 Reporter Emily Ngo.

On Wednesday morning, Yang tweeted a qualification to his earlier tweet, posted in full below:

I spoke to a group of volunteers for the campaign yesterday, some of whom have been with me for years. Many of them were upset with my recent tweet expressing solidarity with the people of Israel in conjunction with the violence in the region this week that has claimed the lives of innocents and children on both sides.

They expressed to me that they follow and support me for a number of reasons, one is that I am a clear-headed person who follows facts. The other is that I am a human being who stands for universal values of fellowship and goodwill. They felt that my tweet was overly simplistic in my treatment of a conflict that has a long and complex history full of tragedies. And they felt it failed to acknowledge the pain and suffering on both sides.

They were, of course, correct.

I mourn for every Palestinian life taken before its time as I do for every Israeli. Suffering and pain and violence and death suffered by anyone hurts us all. All people want to be able to live in peace. We all want that for ourselves and our children.

Support of people does not make one blind to the pain and suffering of others. Again, most everyone simply wants to be able to live and pray in peace.

And that is what we want as well. I join with millions around the world in praying that the current situation be resolved as quickly as possible, peacefully and with minimal suffering.

For those who have spoken to me on this – thank you. Continue to believe in humanity.

Assemblyman Simcha Eichenstein, who has endorsed Yang, disputed characterization of Yang’s statement as walking back his previous support of Israel. “I find Andrew Yang’s statement to be consistent with earlier tweet as rockets were flying into Israeli population centers and killing civilians – both Jewish and Arab,” Eichenstein told Hamodia on Wednesday. “Andrew condemned Hamas’ terrorist network. His subsequent statement that we mourn all innocent lives on both sides, and join with millions in praying for a quick and peaceful resolution to this situation, is something that all of humanity should support, as do I.”

Another candidate, Kathryn Garcia, did not tweet on the situation in Israel, but her campaign sent the following statement to Hamodia:

“The escalation of conflict, violence and loss of life in the Middle East is tragic and disheartening. Kathryn is and has always been a supporter of Israel and she believes that we need to see peace for the sake of families abroad and here in New York City, where this conflict touches so many New Yorkers. As Mayor, she will focus on the communities in New York City who are suffering, feeling the impact and worried about the safety and well-being of family members abroad as the devastating conflict continues in the region. New York City must be a safe city with dignity for all communities.”

Garcia, a moderate Democrat who formerly served as city Sanitation commissioner, has been seeing low poll numbers, but her campaign received a boost with the endorsement of The New York Times on Monday night.

Republican mayoral candidate Curtis Sliwa tweeted Tuesday, “The terrorist attack on the people of Israel yesterday was disgusting & condemnable in the strongest terms possible. In NYC, across the country, & abroad, we must ALL stand with Israel. Our bond with Israel is unbreakable & we must reflect that in our words & actions everyday!”

Not all mayoral candidates who commented on the matter supported Israel.

Progressive candidate Dianne Morales, who has been at the bottom of most polls, tweeted on Saturday, “My heart aches for people in #Palestine and #Colombia. Solidaridad, hoy y siempre” [Solidarity, today and always]. On Tuesday, she tweeted, “Our world needs leaders who recognize humanity and the dignity of all lives. Whether in NYC, Colombia, Brazil or Israel-Palestine, state violence is wrong. Targeting civilians is wrong. Killing children is wrong. Full stop.”

One Arab commenter wrote “You got my vote!” while a Twitter account for StopAntisemitism.org replied to Morales, “Very happy to see you’re condemning the Hamas terror rockets from Gaza intended to murder Israeli civilians.”