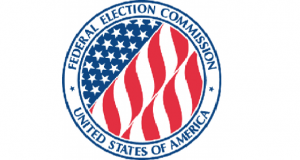 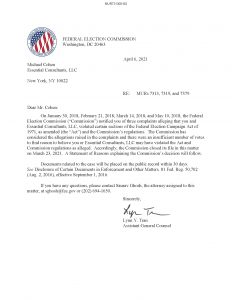 On Thursday, the Federal Election Commission released a statement that it had formally dropped the case looking into whether former President Trump violated election law with a payment through his personal lawyer, Michael D. Cohen, of $130,000 to suppress information which may have proved damaging to his 2016 Presidential campaign.

The payment was never reported on Mr. Trump’s campaign filings, and his lawyer charged that Mr. Trump had requested that he arrange the payments. Cohen was sentenced to prison for breaking campaign finance laws, tax evasion and lying to Congress.

“It was my own weakness and a blind loyalty to this man that led me to choose a path of darkness over light,” Mr. Cohen told the court in 2018.

Cohen pleaded guilty to, among other charges, campaign finance violations. He said he arranged the payments “for the principal purpose of influencing the election.”

The Republican commissioners, Trey Trainor and Sean Cooksey, said that pursuing the case was “not the best use of agency resources,” that “the public record is complete” already and that Mr. Cohen had already been punished.

The two Democratic commissioner, Shana Broussard and Ellen Weintraub, objected to not pursuing the case after the agency’s staff had recommended further investigation.