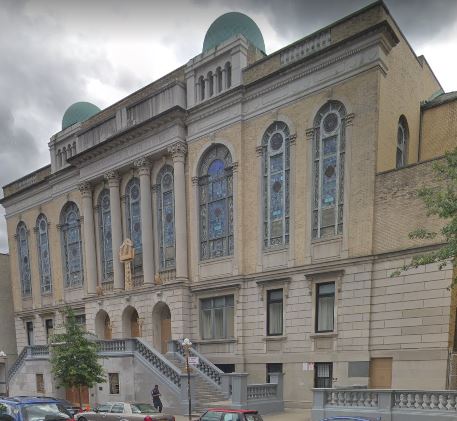 The student who was shot died of his injuries. He has been identified as Devonte Lewis, 17 years old, from Canarsie.

Our original story appears below:

The shooting occurred at 2:42 p.m. when the victim was apparently involved in an altercation with 2 other Urban Dove students when one of them shot him. The victim was transported to Kings County Hospital, where he is expected to survive.

Police are searching the neighborhood for the shooter but have not yet released any information about the suspects or the victim. When asked if the suspects or victim were students of The Urban Dove School, a police spokesman told Hamodia it is unknown if he’s a student, where he lives or the reason he was shot, but the investigation is ongoing and “we are looking into all of those things.”

However, Councilman Kalman Yeger told Hamodia that a police source told him that the victim was indeed a student. Kalman Yeger tweeted, “In 70 years since East Midwood Jewish Center built its school building, no student was ever shot there. Until today.”

A Shomrim member who wished to remain anonymous told Hamodia, “This is exactly what the community was afraid of when it opposed the school.”

Urban Dove serves students who have been unsuccessful in a regular school setting due to behavioral and other issues, with most of them 16 to 21 years old. Despite searching for a more permanent location for many years, the school has been denied rental many times due to the unruly nature of the student body, according to local resident. In the past 3 years, there have been hundreds of 911 calls involving the school.

Neighbors contacted East Midwood Jewish Center’s board of directors when they announced they were renting their facilities to Urban Dove, expressing their concern over the aggressive reputation of the students. Despite the opposition of these neighbors, the board went ahead with the rental. “We are quite unnerved by today’s shooting, and we are concerned about what the school is doing to the tranquility of our community,” a neighbor told Hamodia. “We hope that as a result of this tragic event, the board will now re-examine their decision.”