Over 150 people in Meron were injured with dozens of people succumbing to their injuries during the Lag BaOmer festivities.

Ichud Hatzalah performed CPR on a number of students who were injured in the area where the Toldos Aharon Rebbe, shlita, was conducting a hadlakah in Meron. A group of people were descending some steps leading to a restricted area when the crowd surged forward and  people began tumbling on one another, causing many to be crushed by the stampede.

Medics also provided assistance to over 30 wounded with bruises and injuries, and 6 helicopters were sent to assist with evacuation of the injured. Magen Dovid ambulances evacuated the injured to Ziv Hospitals (17) and the Galilee Medical Center in Nahariya.

Tehillim was said immediately at the site.

United Hatzalah volunteer EMT Yosef Chaim Ben Tzion, one of the first responders at the scene and who participated in the CPR relayed, “A number of the injured are in critical condition and a large number of people were moderately injured after a grandstand collapsed with dozens of people on it. Doctors, paramedics, and EMTs from United Hatzalah who were providing medical security for the event rushed to respond and initiated CPR on a number of individuals while treating the others for their injuries.”

Due to the nature of the incident, members of the Pychotrauma and Crisis Response Unit were dispatched as well in order to deal with those who are suffering from shock and emotional stress reactions. 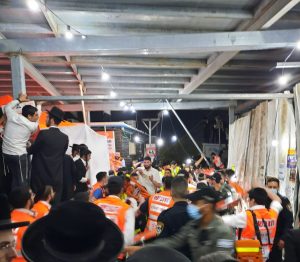 Following the incident, the commander of the Northern District Police ordered a complete stop of transportation and a ban on entering Mount Meron because of fear for public safety. The shuttles will cease operations to bring to the mountain, while empty buses will be sent to help evacuate the people.

The public on Mount Meron were asked to come to the shuttle stations and parking lots so that all visitors can be evacuated. All visitors who were on their way to Mount Meron and had not yet arrived at their destination were also ordered to turn back, as the entrances to the mountain have been closed and visitors will not be allowed to enter.

Reports originally said there was a balcony collapse, although MDA spokesman Zaki Heller later said that the casualties as a result of a stampede and not a collapse. This report was later confirmed by the police.

Ziv Medical Center received a report to expect the arrival of approximately 150 wounded. The Aran procedure was announced with the staff was called from home, and are prepared for the absorption of the wounded. Police are expected to take care of evacuation and arrival routes to Ziv, for both the wounded and the staff.

There are several reports that a number of the wounded have succumbed to their injuries. A police spokesman said that so far there are 38 confirmed deaths. Of the 69 wounded who were evacuated, 39 were transported to Nahariya with 14 in serious condition. Ziv received 46 injured, with 4 in critical condition. A total of 5 were evacuated to Rambam Kerem in critical condition, and 1 was transported to Poria in a moderate condition with 5 in light condition. 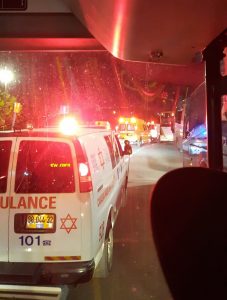 Avi Marcus, director of the Ichud Hatzalah’s medical department, said: “This is a very serious incident with dozens of casualties, some of whom were unfortunately pronounced dead due to the nature of their injuries they suffered. In addition, the Ichud Hatzalah’s Mental First Aid Unit is providing assistance to a large number of victims suffering from shock.”

PM Binyamin Netanyahu said, “There is a heavy disaster on Mount Meron. We all pray for the recovery of the injured. I wish to lend support to the rescue forces operating in the area.”

A police spokesman for the Northern District Command said, “The main effort now of the Israel Police is to evacuate the mountain in an orderly and safe manner. The police commissioner is at the scene and is closely monitoring the evacuation efforts while receiving updates on what happened.

“Major arteries have been blocked for vehicular traffic in order to allow rapid movement of emergency and rescue vehicles for the purpose of evacuating the wounded and treating casualties.

Thousands of people with relatives who travelled to Meron were alarmed when they tried calling and they were unable to get through to them. Cell phone service has been interrupted for the most part in Meron, and people who cannot reach their relatives are urged not to panic.

The Israel Police is aware of the attempts of family members and relatives to try and reach their loved ones in the Meron area by cell phone, and have clarified that the entire mountain area is experiencing a cellular reception problem that does not allow for making and receiving calls. The police announced that the call Center 110, which is the information center of the Israel Police, is available, where details regarding the evacuation of the mountain, the hospitals to which the wounded arrived, and other vital information regarding unreachable phones can be found. 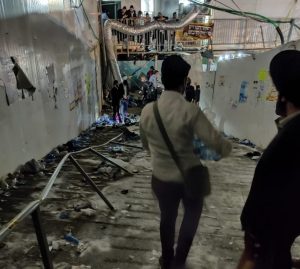 At this time, soldiers from the Home Front Command’s rescue brigade, medical forces from the Northern Command and a number of IAF helicopters with medical teams and 669 fighters are assisting in the large number of casualties in Meron. The forces are assisting in the evacuation of the wounded and dead, in providing medical care on the spot, evacuating the wounded to the hospitals, and regulating casualties between the hospitals. Galei Tzahal, the Army Radio has reported that rescue operations have concluded.

Following the tragedy in Meron, the Satmar Rebbe Harav Zalman Leib Teitelbaum, shlita, ordered the cancellation of the Lag BaOmer tish, and instead thousands will gather to recite Tehillim at the beis medrash in Williamsburg.

This is a breaking story and will be updated as more information becomes available.