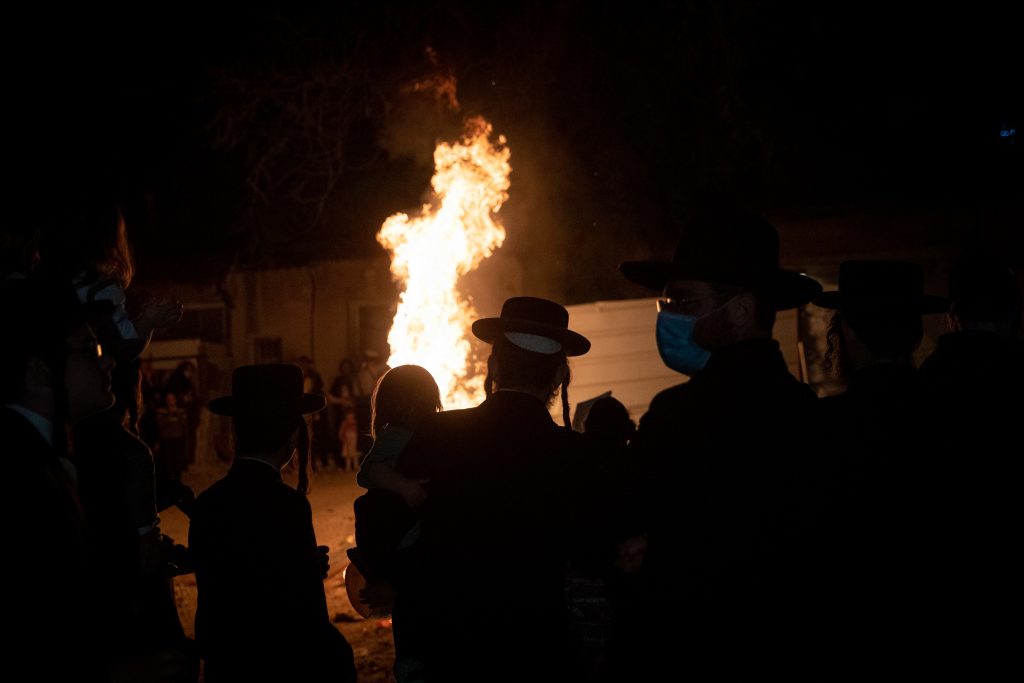 Two years ago, an extreme heat wave was forecast for Lag BaOmer, police imposed restrictions on bonfires around Israel, and only reluctantly made an exception for the central hadlaka at Meron. People were discouraged from traveling to the Kever of Rabi Shimon bar Yochai, out of concern for the heat, surely to be exacerbated by the crowding.

A livestream video can be watched here.

Yet, hundreds of thousands turned out despite the warnings, and the heat was not as bad as predicted.

Last year, Meron was closed to the public for all but the rebbes and a select few at the Kever, due to the fear of spreading the coronavirus.

This year, while the coronavirus has ebbed and major public venues have reopened, the authorities consented to opening Meron as well. Even so, Dr. Sharon Alroy-Preis, head of public health services at the Health Ministry, warned that the mass Lag B’Omer gatherings could cause a terrible new outbreak of the coronavirus. The police, the Religious Affairs Ministry, the Interior Ministry all approved it, but she was not satisfied, and called it “a disgrace…because no one would take responsibility for enforcement” of health precautions.

But as Lag BaOmer approached on Wednesday afternoon, and a projected half million yiddin began arriving at Meron, it appeared that her warning would not diminish the great simcha and achdus of the day. Neither heat waves nor pandemics, kept the Boyaner Rebbe from fulfilling the tradition of the main hadlakah at the Kever of Rabbi Shimon at 8:30 p.m.

Other important bonfires scheduled at the site include those by the Rebbes of: Karlin-Stollin, Rachmastrivka, Toldos Avraham Yitzchak, Toldos Aharon, Breslav Tsefas, Rafael Abuchatzeira of Ashdod, and Rabbi Shlomo Amar, Rav of Yerushalayim.

Still the coronavirus will affect the proceedings, as the authorities have said that only 10,000 time will be permitted to participate in the main celebration at the Kever. Others will have stay at a distance from the main site.

Only those who have a Health Ministry-issued Green Pass indicating that they have been vaccinated or recovered from coronavirus infection will be allowed inside, where just three large bonfires are to be lit, instead of the more than a dozen that are usually held, the Kan public broadcaster reported.

However, since police officials have said that they are not taking responsibility for checking passports, and are leaving it to the event organizers, who will otherwise have their hands full, it was no clear whether such restrictions will, in fact, be observed.

Rabbanim have issued statements cautioning visitors to Meron who are returning home on Erev Shabbos to do so before midday, in order to prevent chilul Shabbos if they should arrive home late, as well as causing police officers on duty at the site to be mechalal Shabbos, since they must wait for the area to clear out before they can go home.

Rav Dovid Klein of Tzefas is one of those who faithfully take part in the celebrations every year, but could not do so last year because of the pandemic restrictions.

In an interview on Thursday afternoon, Hamodia asked him how he spent Lag BaOmer last year.

He said that he stayed home, but since his apartment balcony has a view of Meron, the family gathered there, facing the holy site.

And they took a picture one of his daughters had made of the entrance to the Kever of Rabbi Shimon, they put it up so that they could look at it, as they sang and celebrated along with other families in the building who were doing the same on their balconies.

It wasn’t as good as being there, of course, but it was the best they could do.

This year, however, he is thrilled to go back for the real thing. What is it that draws him there?

He said that the story is told of the Karliner Rebbe, who traveled to Eretz Yisrael about 100 years ago to be in Meron for Lag BaOmer, at that time an unusual thing to do. When he returned home, people asked him, How was it? What was it like?

“It’s Yom Kippur on the inside, Simchas Torah on the outside,” was the rebbe’s answer.

Rav Klein said there are a number of explanations of what he meant, but that he would offer two: Inside, means inside the compound, at the Kever, where the tefillos and teshuva are most intense, like Yom Kippur. Outside refers to the places further from the Kever, where singing and dancing are more the main thing, like Simchas Torah.

Another explanation: Inside refers to the pnimius of the event, the inner experience; outside means the external, physical expressions of simcha and emunah.

Rav had to end the conversation to board a bus to Meron, but before he did so, we asked him if he had anything to add. He said that someone has just asked him for the source of lighting bonfires on Lag BaOmer.

He replied that “this is Rabbi Shimon bar Yochai’s yartzheit. Normally, on a yartzheit we light candles. But for the great Tanna Rabbi Shimon we light bonfires.”

The Ministry of Transportation said that as of 8 p.m. Thursday, some 923 buses had departed from points across the country for Meron, of which over 600 had already reached the town, carrying 42,300 passengers. In addition, 128 shuttles with 9,000 people left from the train station, and another 454 shuttles from different locations with over 20,000 people. Many more were expected overnight and Friday morning.

Rabbanim have issued statements cautioning visitors to Meron who are returning home on Erev Shabbos to do so before midday, in order to prevent chilul Shabbos if they should arrive home late, as well as causing police officers on duty at the site to be mechalal Shabbos, since they must wait for the area to clear out before they can go home.