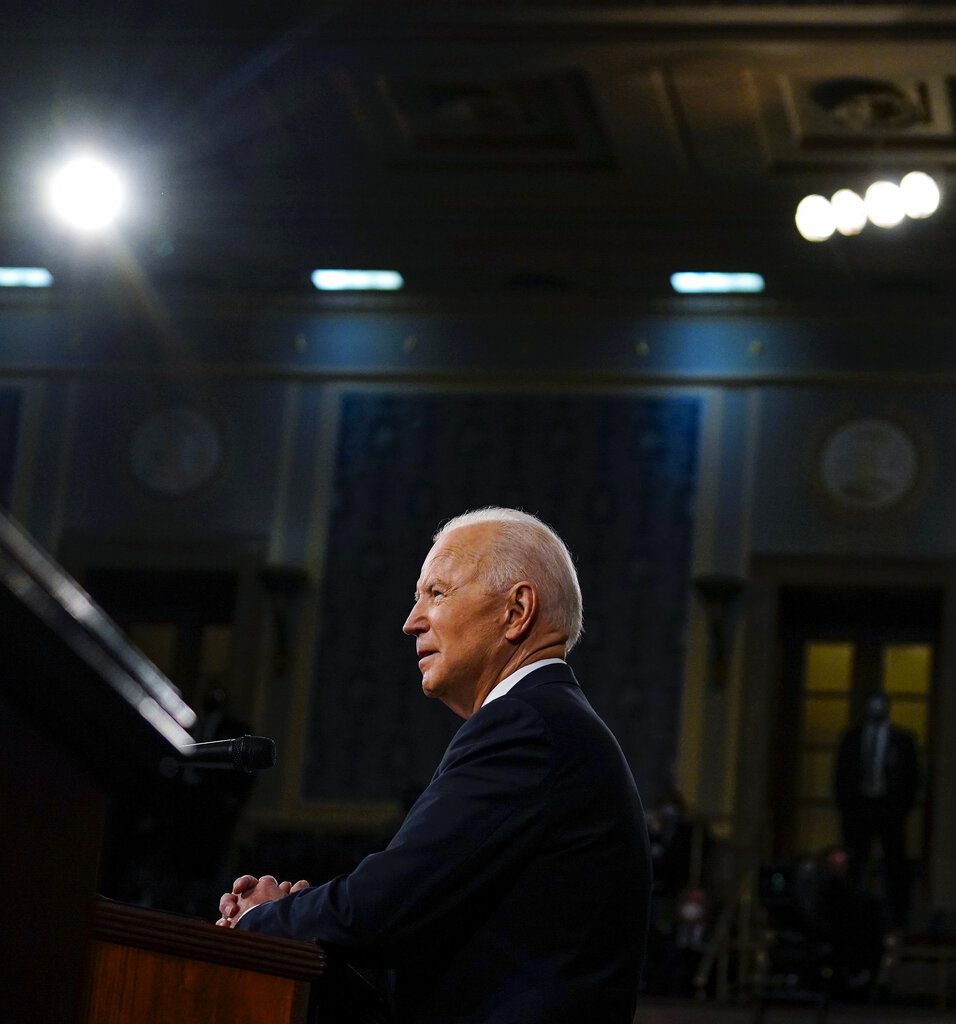 Taking a swipe at his predecessor, President Joe Biden gave a distorted account of the historical forces driving migrants to the U.S. border, glossing over the multitudes who were desperate to escape poverty in their homelands when he was vice president.

In his speech to Congress on Wednesday night, Biden also made his spending plans sound more broadly supported in Washington than they are.

The Republican response to Biden’s speech departed from reality particularly on the subject of the pandemic. Sen. Tim Scott of South Carolina tried to give the Trump administration credit for turning the tide on the coronavirus in what was actually the deadliest phase.

A look at some of the claims:

BIDEN: “If you believe in a pathway to citizenship, pass (immigration legislation) so over 11 million undocumented folks, the vast majority who are here overstaying visas, pass it.”

There is no official count of how many people entered the country legally and overstayed visas. The government estimates that 11.4 million were living in the country illegally as of January 2018 but doesn’t distinguish between how many entered legally and stayed after their visas expired and how many arrived illegally.

Robert Warren of the Center for Migration Studies of New York, a former director of the Immigration and Naturalization Service’s statistics division who has studied visa overstays for decades, has done the most recent work on the issue. He estimated that, as of 2018, 46% of people in the country illegally overstayed visas — not a majority, let alone a “vast majority.”

BIDEN, on his economic proposals: “There’s a broad consensus of economists — left, right, center — and they agree that what I’m proposing will help create millions of jobs and generate historic economic growth.”

THE FACTS: He’s glossing over the naysayers. Some economists, also bridging the ideological spectrum, say he’s spending too much or in the wrong way. Biden’s pandemic relief plan did enjoy some bipartisan support, even getting a general seal of approval from Kevin Hassett, who was Trump’s chief economist. But his policies have also drawn bipartisan criticism.

For one, Larry Summers, who was Barack Obama’s top economist and Bill Clinton’s treasury secretary, warned that Biden’s relief package risks rates of inflation not seen in a generation.

Biden’s latest proposals on infrastructure and families would require substantial tax increases on corporations and wealthy investors — leading to criticism by many CEOs and more conservative economists that growth could be compromised. Biden’s economics team says the resulting programs and infrastructure would boost growth.

The plan to increase capital gains taxes drew the scorn of Douglas Holtz-Eakin, a former director of the Congressional Budget Office and Republican adviser. He said the White House is wrong to focus on the sliver of people being taxed and what matters is how much of the economy would be taxed.

“The wealth taxes are a draconian tax on the annual return to that capital,” he said. “What matters is the amount of economic activity that is taxed, not the number of people.”

SOUTH CAROLINA SEN. TIM SCOTT:  “Just before COVID, we had the most inclusive economy in my lifetime. The lowest unemployment rates ever recorded for African Americans, Hispanics and Asians. And a 70-year low nearly for women. Wages were growing faster at the bottom than at the top — the bottom 25% saw their wages go up faster than the top 25%. That happened because Republicans focused on expanding opportunity for all Americans.”

THE FACTS: His statistics are selectively misleading.

Nothing is false on its face in terms of numbers. Yet the gains reflected the longest expansion in U.S. history — something that started during Obama’s administration and simply continued under Trump without much change in growth patterns.

Scott also neglects to credit the Federal Reserve, which kept interest rates near historic lows to support growth and keep the recovery from the Great Recession going.