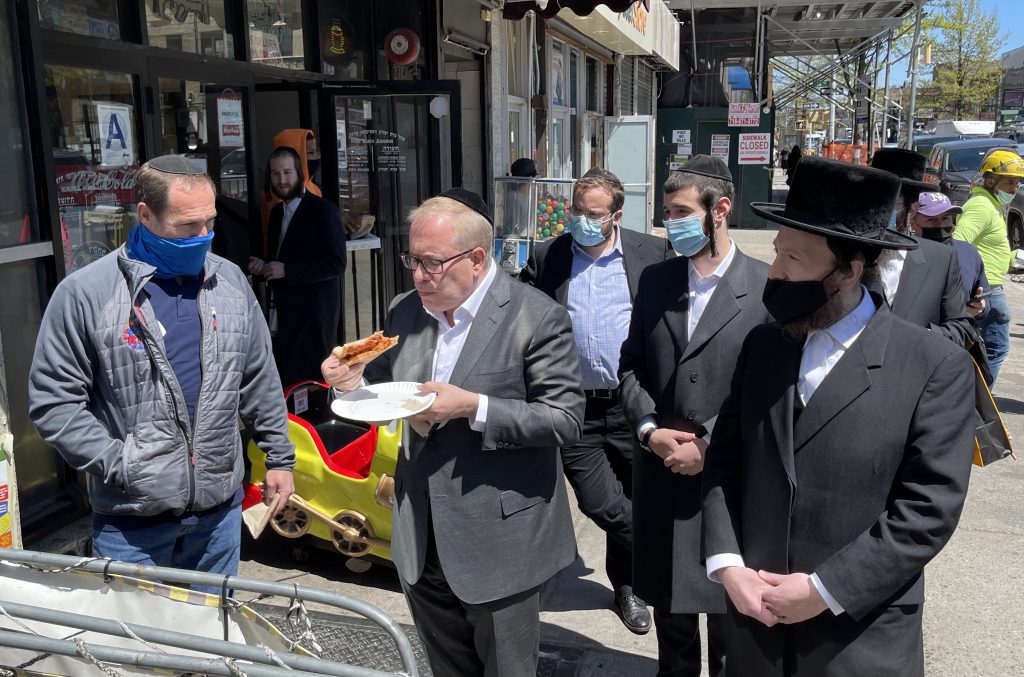 Stringer, who currently serves as New York City Comptroller, has been polling third among a large field of candidates vying for the Democratic nomination.

Stringer visited yeshivos of Belz, Bobov and Bobov-45 in the morning, and in the afternoon walked down 13th Avenue and stopped in several stores.

As Stringer ate a slice of pizza outside Amnon’s, one of the owners described to him the difficulties businesses have faced during the Covid pandemic.

“We’ve got to get off the backs of the small businesses,” replied the candidate. “We can’t keep doing this.”

While media could not participate in the yeshiva tours and meeting with administrators, Stringer later described it to Hamodia: “We talked about the city, and about the neighborhood, and about how we’re going to bring the city back. It was a good conversation among friends, and I’m glad we had the opportunity to do it.”

Among the biggest issues for Orthodox voters is that of government oversight of the secular-studies curriculum. The state Board of Regents is in the midst of formulating guidelines for the curriculum, but oversight would fall to the local school authority, which, in New York City, is the schools chancellor, appointed by the mayor.

Asked by a BoroPark24 reporter Monday to what extent he believed the state should “regulate the curricula of yeshivas,” Stringer replied, “I think that we have to work collaboratively with the yeshivas, and that’s what we’re going to do from a city perspective.”

Stringer has generally spoken in broad terms when asked about yeshiva enforcement, rather than staking out a firm position either in favor of yeshiva independence or of enforcing a specific curriculum. Pressed further by the reporter about his views on the curriculum oversight, the candidate replied, “We’re going to meet the education needs of all of our children. That is my goal, that’s what I’ve always been working towards, and you can expect me to do that, and we’ll come up with specific policies as the campaign [unfolds].”

Stringer gave a similar noncommittal answer when the reporter asked about metzitzah b’peh, a practice in the Jewish circumcision ritual that the Bloomberg Administration had sought to regulate.

“We’re going to continue to do what we’ve always done, which is work with the community leadership on a lot of these issues,” Stringer replied. “And what they can expect is somebody who’s listening and learning and working with the community, as I always have.”

While walking down 13th Avenue, Stringer took an apparent shot at frontrunning candidate Andrew Yang, an entrepreneur whose sole political experience consists of a presidential run in 2020, and who is popular among Orthodox community. “I don’t think we can afford a mayoralty on training wheels,” Stringer said to a reporter for The Forward. “I have deep roots in the community going back years, and I think that will be important as we meet the needs of other communities, especially the Orthodox. I’m someone who’s trusted and has deep relationships.”

Stringer has been on the New York political scene for three decades, as an Assemblyman, Manhattan borough president, and then comptroller. Amid an ascendancy by the progressive wing of the Democratic Party in recent years, Stringer is viewed as having moved far to the left, and has angered some in the Orthodox community with his endorsements of left-wing candidates, supported by the Democratic Socialists of America. Stringer grew frustrated during an interview with Hamodia last month, when pressed on these endorsements and on his praise for Al Sharpton.

As Stringer walked through Boro Park on Monday and made his pitch to Orthodox voters, a Hamodia reporter asked the candidate to address the fear that some have expressed about Stringer’s having moved to the far left, a political viewpoint at odds with many in the community.

Stringer asked the reporter which paper he was with; told it was Hamodia, the candidate groaned, “Oh G-d, didn’t we do this interview already,” and said, “Refer back to what I said during your last interview.”

Polls have generally shown Stringer in third place for the June 22 primary, just behind Brooklyn Borough President Eric Adams. Both trail Yang by a wide margin, but Stringer expressed confidence in his chances.

“I think we continue to build a very good coalition, that I think will propel me to win the Democratic primary,” Stringer said Monday. “I felt that way the day I announced. Nothing has changed in terms of my feeling. It doesn’t mean I don’t have to work hard. It doesn’t mean that aren’t hurdles to overcome. When I ran against Eliot Spitzer [for comptroller in 2013] I was 20 points behind. A lot of people thought I was a goner, and we came storming back. I’m a pretty good closer at the end.”