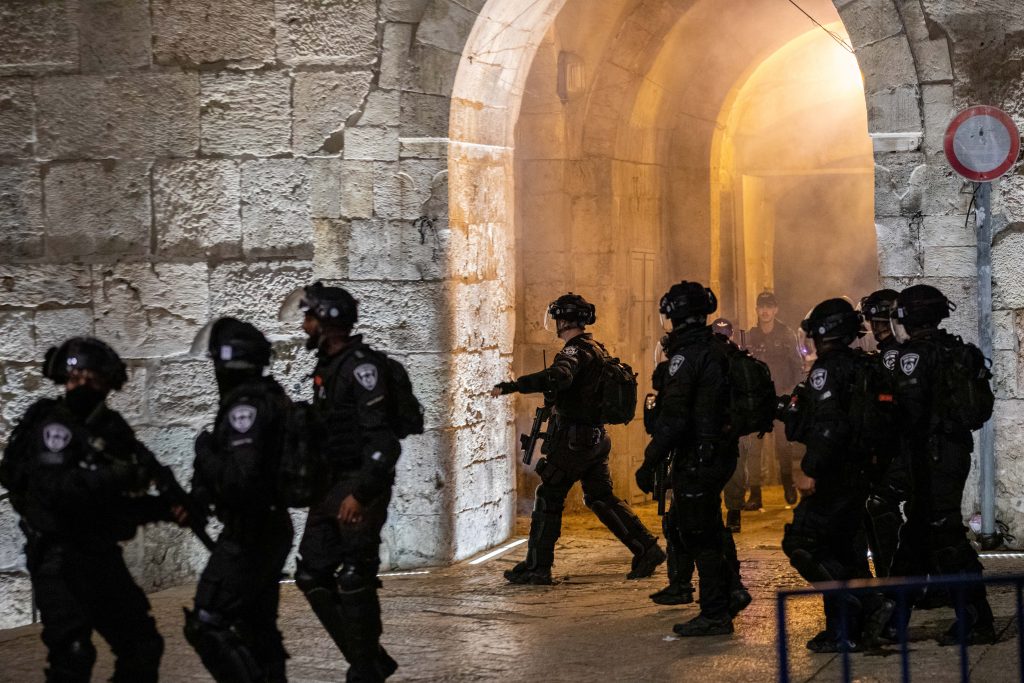 Hundreds of police officers in riot gear deployed around the Old City after nightly clashes spilled into the Gaza Strip and Yehudah and Shomron. Some Palestinians threw stones and bottles as police on horseback dispersed the crowds, though the violence appeared less intense than on previous nights.

A statement by the Israel Police said that its troops “will employ all the means at their disposal to arrest rioters and prosecute them to the full extent of the law. We will not allow disruption of public order or any harm to come to security forces.”

Police Commissioner Yaakov Shabtai said that officers from all districts have been redirected to Yerushalayim to bolster the district police’s deployment.

“I call on the public leaders from across the political spectrum, on the local and national level, to tone down the rhetoric and prevent further agitation so as to allow the public to get through Ramadan in peace,” he said.

Shabtai warned that “various radical elements are trying to fuel unrest. We will restore order and we will deploy additional forces as needed in the coming days.

“We’ve deployed undercover officers as well as uniformed troops to ensure the freedom of worship for all residents and all visitors to Jerusalem, as we do every year,” he stressed.

Clashes and violent incidents have occurred almost nightly in Yerushalayim, since the start of Ramadan on April 13.

In an interview with Army Radio, Yerushalayim District Commander Doron Turgeman addressed the wave of riots and the challenge it poses to the police.

Turgeman noted that the challenge is intensifying in light of the fact that this is the period of Ramadan. “There is no doubt that this Ramadan is different from previous years.”

“We are working to enable the prayers, but unfortunately, with no connection to Ramadan, hundreds of young people are working for one goal – to create riots and clash with the police,” he added.

“We will work to deal with the violations. We have significantly expanded the activity, we will make sure that the month of Ramadan is held in an orderly manner,” the district commander added.

Israelis have been angered by videos on social media showing Palestinians assaulting religious Jews in the city at random.