An apparent chemical leak early Sunday afternoon at an egg processing plant in the Village of Woodridge, New York, hospitalized 19 employees, but will not require evacuation of residents.

Moshe Chaim Weinberg, a member of the village’s Board of Trustees, told Hamodia that the leak, at the Newburg Egg plant on Novogrodsky Road, was responded to by dozens of vehicles from agencies including the Sullivan County Sheriff, Fallsburg Police, New York State Police, MobileMedic EMS,  the fire departments of Woodridge, Fallsburg and Rock Hill, and a Hazmat team from Orange County.

Emergency responders in hazmat suits entered the plant and evacuated the workers, 19 of whom were hospitalized, but none are in serious condition.

The village has approximately one thousand year-round residents, including some 30 Orthodox Jewish families, as well as a large number of summer vacationers.

Weinberg said that while there was earlier talk of evacuating residents, it appears residents in fact won’t have to evacuate.

A Newburg Egg operator who answered a phone call by Hamodia later Sunday afternoon responded abruptly, “Everything is okay.” A Fallsburg Police sergeant told Hamodia, “We have nothing official to put out at this time.”

Newburg Egg, according to its website, processes tens of millions of eggs per month, including liquid, frozen and powdered eggs. 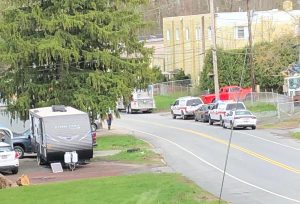 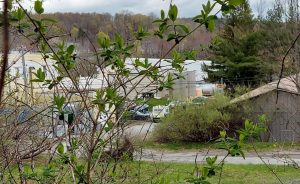