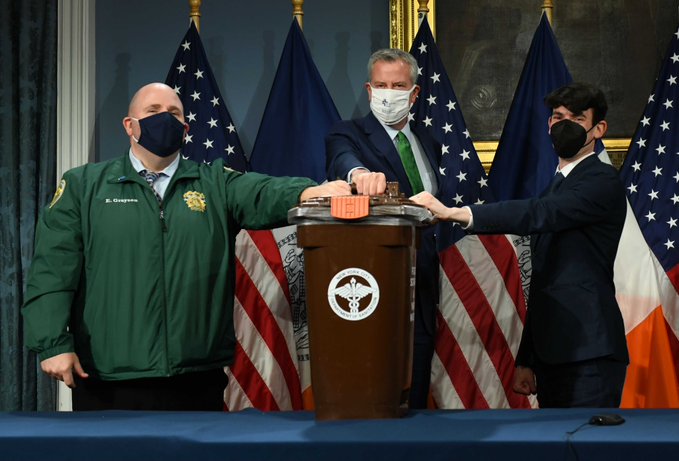 New York City will restart its organic waste disposal program after it had been put on hold due to pandemic budget constraints.

The city’s Curbside Composting Program will be available to the 3.5 million New Yorkers who previously utilized the service, with buildings and residents able to opt-in for free weekly curbside composting service. Sign up will open in August, and the program is expected to resume in October.

“It was on hold during COVID, but now, thankfully, we have the resources to bring curbside composting back,” said Mayor Bill de Blasio at his press conference. As a prank, de Blasio had a brown composting bin wheeled to the table as a guest. “Enrollment will begin in August in the communities that previously had curbside composting. Collection services will begin in October. We’re encouraging buildings to opt in. This is going to be all on an opt-in system. And we think this is going to be the right way to restart the organics effort and the composting effort.”

In addition to the compost program, the Food Scrap Drop-Off will be expanded to more than 200 locations. The drop-off allows people to bring leftover fruits, vegetables, grain products, flowers, and eggshells to local compost sites. Instead of being dumped in the trash, the food waste is used as soil and fertilizer.

The city will also be bringing back clothing recycling programs several times a year throughout the five boroughs, when people are encouraged to donate lightly used clothing that can reutilized or given to charity instead of throwing out.

“The community composting program, which is the popular neighborhoods sites where people of the neighborhood are operating for – again, an opt-in, a voluntary program throughout the neighborhoods of the city – will grow by double,” said Sanitation Commissioner Edward Grayson. “We currently have over a hundred sites, and we’re excited to say that we expect to have over 200 sites. And these sites, to put it into context, have collected over 1.3 million pounds of organic material over the last seven months. And if we can double the sites, we can do even more than that. It’s very exciting. These are great programs and we’re committed to make sure that we have these sites available in every community district in the city.”