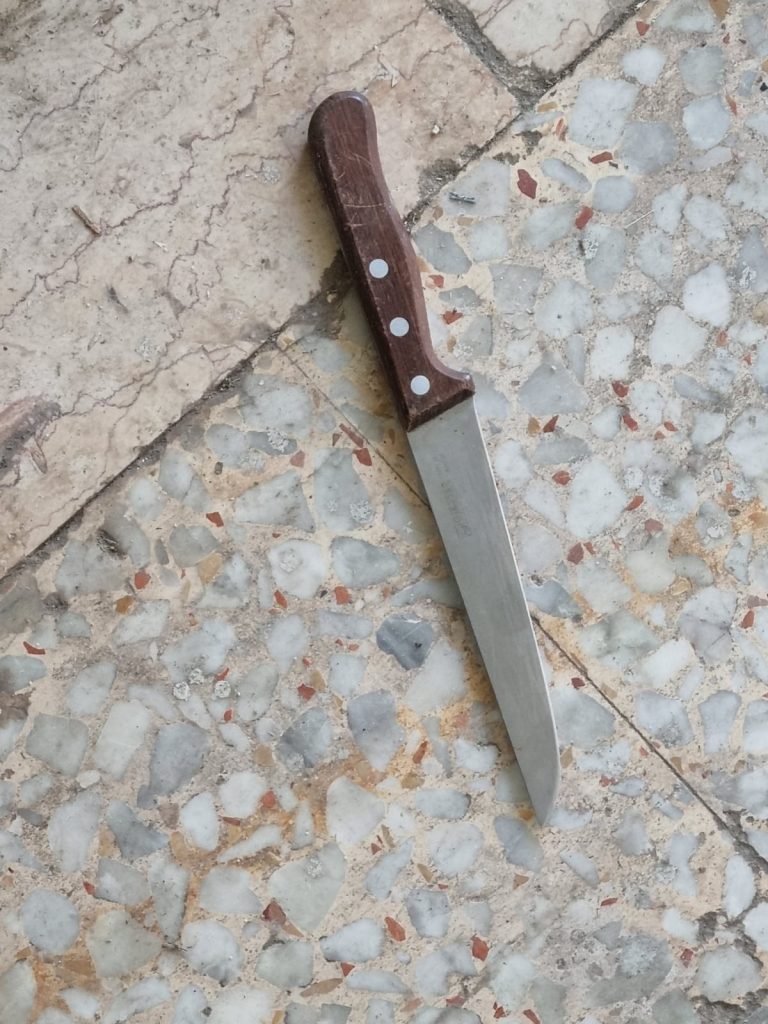 An Arab teenager who apparently intended to carry out a stabbing attack was arrested Friday by Border Police, at a checkpoint at Mearas Hamachepeilah, the latest incident following days of clashes and riots during Ramadan.

When the suspect, a resident of Chevron who is a minor, arrived at a checkpoint near Mearas Hamachepeilah, police became suspicious and began interrogating him, according to a police spokesperson. During the questioning, the teen apparently changed his mind, took out a knife that had been concealed on his body and revealed that he had been intending to carry out an attack.

This arrest follows a night of violent clashes between Arabs and Jews at Damascus Gate in the Old City of Yerushalayim, and the attempted lynching of a Jewish man.

Marchers from the right-wing Lahava group protesting Arab attacks on Jews in the city were confronted by Arab demonstrators, Ynet reports.

As events escalated, Arab rioters threw rocks and Molotov cocktails at police and Border Patrol officers as they moved to disperse the crowd. An officer from the police’s cavalry unit on Thursday was injured in the face by a rock thrown at him.

Hundreds of police were deployed at the scene. They were using flashbangs and water cannons to break up the protests, with the sounds from the blasts heard across the center of the capital, as The Times of Israel described it.

Police had been girding for trouble at the site as the right-wing group prepared to hold a march at the same time that Muslims’ Ramadam prayers were going on at Har Habayis.

The police were searching cars and making other security checks in the general vicinity of activity, as well as in other areas in the center of the capital, The Jerusalem Post reported.

The far-right organization Lehava was reportedly planning a march while Ramadan services were being held.

Police have arrested at least 69 individuals over the past few nights for disturbances in the city, which have been attributed to rising tensions during Ramadan, an annual occurrence.

Palestinians have clashed with Israeli police amid a dispute over evening gatherings at Damascus Gate after iftar, the breaking of the daytime fast during Ramadan, according to Reuters. Police have fired stun grenades and sprayed foul-smelling skunk water to disperse the Palestinians, who in turn have shot fireworks at them.

“Since Damascus Gate is the main way to reach and enter the Old City, police forces carry out field activities using various means to prevent friction, violence and confrontation, and to maintain order and security in the area,” said a police spokesman.

He also said they will “act firmly against violence and riots of all kinds” to preserve public safety.

Hamas said in a statement, “Don’t test our patience. We will protect our Jerusalem with our blood and spirit.”

On Thursday night, Yechiah Gardi, a 47-year old Yemenite Jew driving through East Jerusalem, was attacked by Arabs who threw stones at his car and beat him as he lay on the floor when he tried to flee on foot. Video on social media show him being repeatedly kicked by several people. His car was later set on fire.

“I did not think I would get out alive from this attempted lynching,” Gardi said Friday morning through his lawyer, Shirah Braver.

The U.S. Embassy in Jerusalem said in a statement that it is “deeply concerned about the incidents of violence in Jerusalem over the last several days,” and “we hope all responsible voices will promote an end to incitement, a return to calm, and respect for the safety and dignity of everyone in Jerusalem.”