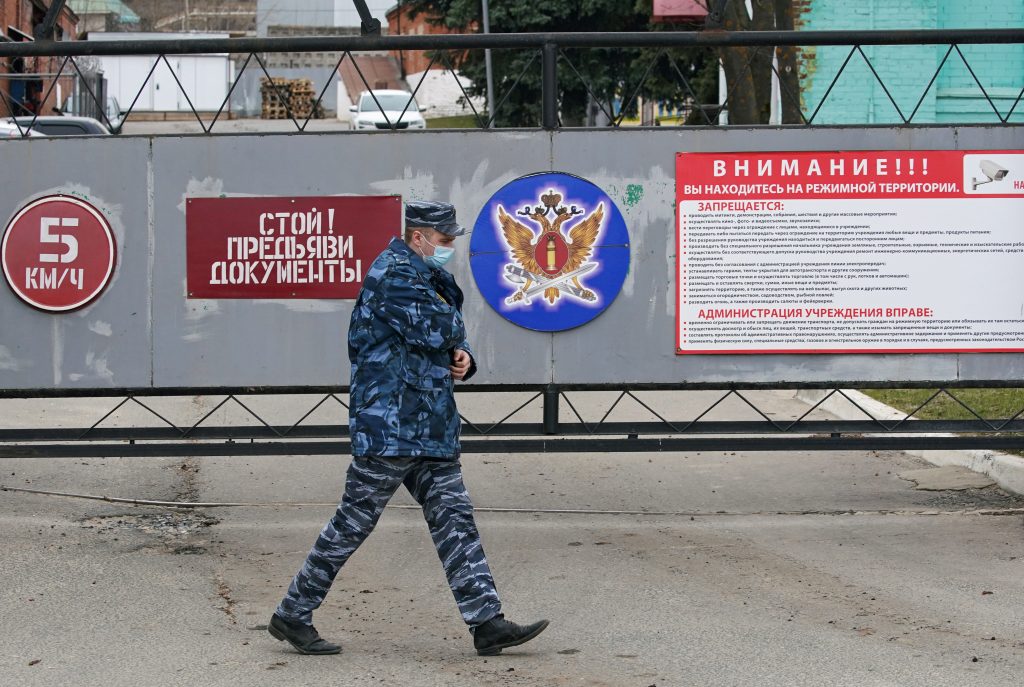 Russian police detained allies of jailed Kremlin critic Alexei Navalny on Tuesday and raided two of his regional offices, his supporters said, a day before they planned to stage mass protests over his ailing health.

Navalny, President Vladimir Putin’s staunchest critic, declared a hunger strike on March 31 to demand access to better medical care. He was moved to a prison with a hospital on Sunday. His supporters say they fear for his life.

The 44-year-old opposition politician is now being held in a one-person cell in the hospital of a maximum security prison and has been given no treatment beyond a glucose drip, his lawyer, Vadim Kobzev, said after visiting him.

Nurses tried repeatedly to give him another drip on Monday but were unable to find a vein, he said.

“The ‘treatment procedures’ have ended at that. There’s been nothing else, don’t believe a word from any of them,” Kobzev tweeted.

The state prison service has said his condition is satisfactory and that he has agreed to receive “vitamin therapy”. Russian state media has accused Navalny of faking his medical problems to draw attention to his cause.

Navalny, in an Instagram post published by his lawyers, said he looked like a skeleton staggering around in his cell and that he was using a paper court document to swat mosquitoes.

“These wretched squeaking and snapping creatures will end a man faster than any hunger strike,” he joked.

A team of doctors that visited the prison where he is being held on Tuesday was again denied access after being kept waiting for hours, in “a clear threat to the life and health of Alexei”, they said in a Twitter post.

Navalny’s allies plan to take to the streets on Wednesday evening in Moscow and other cities across the country.

Authorities have said the demonstrations are illegal, setting the stage for a confrontation and the possibility of mass arrests. Police detained thousands of people at rallies earlier this year over Navalny’s jailing.

Mikhail Khodorkovsky, the former oil tycoon who spent 10 years in custody after falling out with the Kremlin, publicly called on Russians to join the protests in a Twitter post.

In Moscow, where Navalny’s allies want to protest on a square by the Kremlin where Putin is set to address the two chambers of parliament earlier on Wednesday, the mayor’s office said the protest would not be authorised because of the COVID-19 outbreak.

City authorities in Yekaterinburg in the Urals said the centre would be closed to traffic from early evening to rehearse for a military parade.

In Volgograd, an activist at Navalny’s headquarters was handed a 25-day jail term for calling on people to take to the streets on Wednesday, his supporters said.

Police conducted raids at Navalny’s regional offices in the cities of Krasnodar and Kurgan, according to OVD-Info, which monitors protests and activist detentions. Six Navalny activists in different regions were detained on various charges, it said.

Navalny’s activist network faces mounting pressure. On Friday, state prosecutors in Moscow said they wanted to label his regional groups and anti-corruption foundation “extremist”, a move that would essentially outlaw their activity.

In a statement on Tuesday, prosecutors said they wanted the groups banned and accused them of actively coordinating with unnamed foreign powers, allegations rejected as baseless by Navalny’s supporters.

The West has demanded Navalny’s release and U.S. President Joe Biden’s White House said on Monday that the Russian government would be held to account for his fate and that he must be treated humanely.

The Kremlin’s spokesman, Dmitry Peskov, declined to comment on Navalny, saying it was a matter for the state prison service or the prosecutor’s office.

Navalny went on a hunger strike over what he said was the refusal of the prison holding him to provide him with proper treatment for leg and back pain. Russia says he has received normal medical care, as would any other convict.