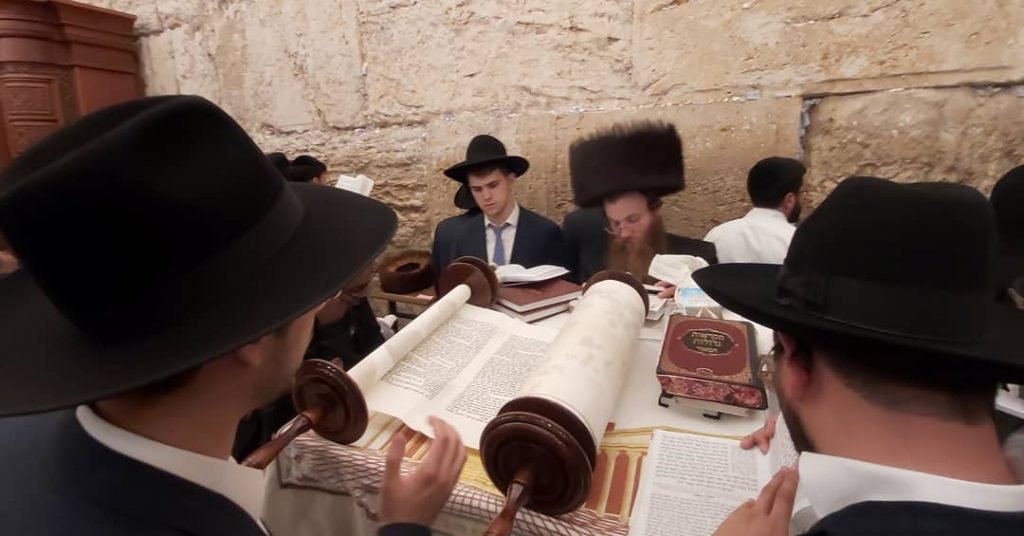 The latest stunt by the Israeli radical feminist group “Women of the Wall” took place on Rosh Chodesh Iyar, and involved a new member of the Knesset, a Reform clergyman named Gilad Kariv, part of the Labor delegation.

Invoking parliamentary privilege to protect himself from prosecution for violating the established rules for the Kosel plaza, Mr. Kariv smuggled a small sefer Torah into the venue and passed it to a cheering group of women, who sang songs in celebration of their accomplishment. Needless to say, cameras and reporters were in tow, to ensure that there would be ample coverage of the event.

What the disturbers of the peace in fact accomplished, however, was to demean the sanctity of the site and greatly distress the hundreds of Kosel “regulars” who were in the plaza, as usual, to daven, not demonstrate.

The entire performance was an exercise in cynicism. When Avishai Greenzweig, legal correspondent for Globes, asked Mr. Kariv if he hopes for a rebuilt Beis HaMikdash, the MK answered that “Reform Judaism does not look forward to the construction of a Temple, but rather seeks to repair the world through G-d’s Kingdom.” So why not, he should have been asked, just support chanting, tefillin-wearing women doing their thing in Reform temples? Why make the Kosel, a place he regards to lack religious meaning, into a battlefield? The answer is as obvious as it is sad. He and his friends are engaging in politics, not worship.

The happening might be dismissed as mere street theater — or, perhaps, more accurately, as theater of the absurd. But it needs to be taken seriously by all Jews who cherish our mesorah.

Because, while the feminist group has long been a thorn in the side of mispallelim at the Kosel and all Jews who care about the kedushah and atmosphere of shalom at the site, the recent escapade signals something more.

Now, the radical tefillah disrupters have not only passive leftist supporters in the Knesset but an active MK partner — “It’s like having a Woman of the Wall in the Knesset,” gushed Anat Hoffman, Women of the Wall’s chairwoman. And that is cause for concern.

And not just because Jewish decorum at the Kosel is threatened.

But because the push for an “egalitarian” presence near the holiest place on earth is a mere wedge, intended to create an opening for the more ambitious agenda of those doing the pushing. They seek nothing less than the dismantlement of Israel’s tenuous but vital connection to Torah, to what defines and protects Klal Yisrael.

As Ms. Hoffman went on to say last week, Mr. Kariv’s presence in the Knesset is “crucial,” as the news organization The Media Line paraphrased her sentiment, not only for “women’s rights in Israel” but for “the plight of religious pluralism” in Israel.

For his part, MK Kariv has openly and loudly declared his intention of “breaking the [chareidi] monopoly and opening new alternatives for a relevant and welcoming Israeli Judaism,” and views himself as being a “direct, clear, unprecedented representation for Reform Judaism” in the Knesset.

“Because of the monopoly, the rabbinic establishment has become more and more Haredi and extremist over the years,” Kariv recently wrote on social media. He called for “breaking the monopoly and opening new alternatives for a relevant and welcoming Israeli Judaism.”

The push to entrench religious “pluralism” in Israel, to detach its Jewish society from the roots that sustain it is an issue in which Orthodox Jews outside of Israel have solid standing for offering some uncomfortable truths.

Firstly, because we represent the future of the Jewish community. Although the Reform movement claims to be the largest Jewish religious movement in the United States, that is a grave misrepresentation, at least if “religious movement” is to have any meaning.

The late and unlamented Reform Judaism Magazine, tellingly, claimed to have a circulation of “nearly 300,000,” but unceremoniously folded a few years ago for lack of interest. (And its final issue’s cover story, telling in its own way, featured Jews who sport tattoos, an issur d’Oraysa.)

The only growing segment of American Jewry, demographers confirm, and the most vibrant one, is the Orthodox. Most American Orthodox Jews, moreover, have close connections to Israel, and to friends and relatives there. And, by very definition, all Orthodox Jews consider “being Jewish” as very important to them.

But the voice of Orthodox Jews in the golah needs to be heard for another reason, too: We are direct witnesses to the vast societal upheaval that has been born of non-halachic conversion and divorce ceremonies, to the effective fragmentation of what was once a diverse but single Jewish community into distinct and, tragically, irreconcilable cantons.

That is MK Kariv’s dream for Israel. For any caring Jew, it is a nightmare.