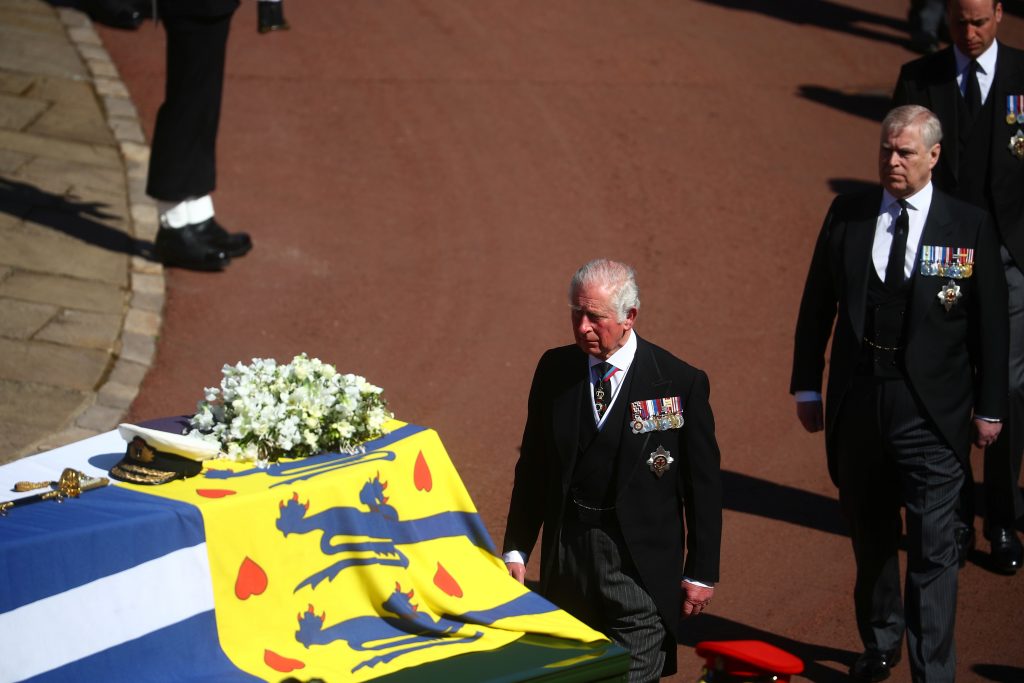 Queen Elizabeth bade farewell to Prince Philip at a funeral on Saturday that celebrated his seven decades of service.

Elizabeth, dressed in black and in a white trimmed black face mask, stood alone, head bowed as her husband of 73 years was lowered into the Royal Vault of St George’s Chapel in a service attended by senior royals including heir Prince Charles.

“We have been inspired by his unwavering loyalty to our Queen, by his service to the Nation and the Commonwealth, by his courage, fortitude and faith,” Dean of Windsor David Conner said.

Philip, who married Elizabeth in 1947, helped the young queen adapt the monarchy to the changing times of the post-World War Two era as the loss of empire and the decline of deference challenged the world’s most prominent royal family.

In 1997, the queen described Philip as her “strength and stay” over their decades of marriage. Now 94, she has reigned for 69 years.

Her husband’s coffin was borne to the chapel on a bespoke Land Rover Defender TD 130 in military green that Philip himself helped to design, as a minute gun fired eight times.

Philip’s children and grandchildren followed behind on foot, evoking memories of the 1997 funeral of Diana when William and Harry – then just 15 and 12 – walked behind their mother’s coffin.

His naval cap and sword lay on top of the coffin, which was covered with the Duke of Edinburgh’s personal standard featuring the Danish coat of arms, the Greek cross, Edinburgh Castle and the stripes of the Mountbatten family.

A wreath of white roses, lilies and jasmine from the queen also adorned the coffin.

There were just 30 mourners inside the chapel because of continuing coronavirus restrictions in Britain. As the service began at 3 p.m., Prime Minister Boris Johnson observed a minute’s silence, along with millions of Britons.

Before the procession, military bands spaced out across the quadrangle of Windsor Castle in brilliant sunshine to play the prince’s chosen music.

As the service ended, buglers from the Royal Marines sounded the “Last Post” and then “Action Stations” to honor the late duke’s World War Two naval service, before choir sang the national anthem.

Elizabeth left for the castle’s apartments in her car but other royals decided to walk up the hill to the main part of Windsor Castle.

The palace emphasized beforehand that while the occasion would have the due pageantry that marks the passing of a senior royal, it remained an occasion for a mourning family to mark the passing of a husband, father, grandfather and great-grandfather.