Regional Poll: Yang With Double-Digit Lead in Mayoral Race, on Top in Every Demographic
Regional 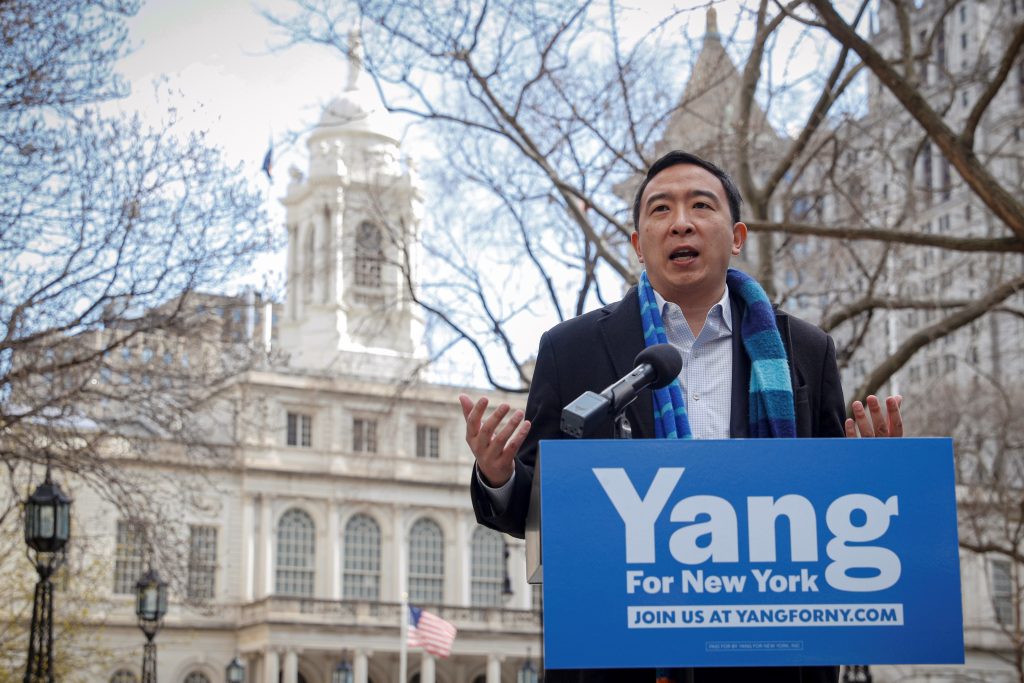 Andrew Yang still appears to be the candidate to beat in the New York City mayoral race, with a poll showing him maintaining a double-digit lead over all rivals for the Democratic nomination fewer than 70 days from the primary election.

Yang, an entrepreneur most noted for his proposals to give cash payments to the poorest New Yorkers and for the city to aggressively reopen and offer incentives for businesses and employers to return from the Covid lockdown, has first-place support from 26 percent of respondents in a poll by Data for Progress, a progressive think tank and polling organization. Brooklyn Borough President Eric Adams has 13 percent of first-place votes, city Comptroller Scott Stringer 11 percent, and Maya Wiley, a former counsel to Mayor Bill de Blasio, has 10 percent.

Shaun Donovan, a former HUD Secretary and Director of the U.S. Office of Management and Budget in the Obama Administration and Commissioner of the New York City Department of Housing Preservation and Development in the Bloomberg Administration, has 7 percent; former Citigroup executive Ray McGuire has 6 percent; former city Sanitation Commissioner Kathryn Garcia has 4 percent; nonprofit executive Dianne Morales has 3 percent. Four percent of respondents chose a different candidate, and 14 percent were undecided. (Councilman Carlos Menchaca, who has since dropped out of the race, got 1 percent.)

“We know that Andrew Yang is a unifier that’s going to bring our city together, a visionary for our city, the person that folks are really energized by,” Yang co-campaign manager Sasha Neha Ahuja said on a Zoom briefing with reporters Friday to discuss the poll. “Our core messages of Andrew’s vision for direct cash relief to low income families … is a game changer in our city. We know that his focus on housing and jobs and bringing our city back in a moment when New York desperately needs a cheerleader, is exactly the one that’s resonating with voters.”

The poll was conducted by Data for Progress from March 21 to April 5 via web and text, from 1,007 likely Democratic primary voters. It has a margin of error of plus or minus 3 percent.

Two previous polls conducted this year, as well as an internal poll by the Yang campaign, showed Yang with a double-digit lead, with Adams second. A poll released last month showed Yang’s lead at just six points, but 50% of respondents to that poll were undecided.

Yang, who has taken positions of strong support for yeshiva independence and Israel, and Adams, who has long-time ties with Orthodox Jewish communities in Brooklyn, are also believed to have strong support among Orthodox voters, though polling demographics aren’t broken down by religious affiliation.

While polling has consistently shown Yang in the lead, his campaign concedes the race is far from over: Candidates have targeted frontrunner Yang for criticism. Voters may not be fully familiar with all candidates, who have held many Zoom forums with various interest groups, but won’t have their first televised debate until next month. And candidates are expected to have a flurry of ads in the weeks leading up to the June 22 primary. Adams and Stringer each have more than $7 million on hand, Yang has over $5 million, and Morales, Garcia, McGuire and Wiley each have between $2.5 million and $3.6 million.

Yang co-campaign manager Chris Coffey said on the Zoom call, “We are not saying that this race is on cruise control, we’re not saying the race is anywhere near over; what we’re saying is we would rather be where Andrew is than where anyone else is … Obviously there’s going to be an effect when folks start to advertise. But I think we are going to have the resources that we need to maintain our lead and go into the final eight weeks with a very strong lead and feeling pretty good about where we are.”