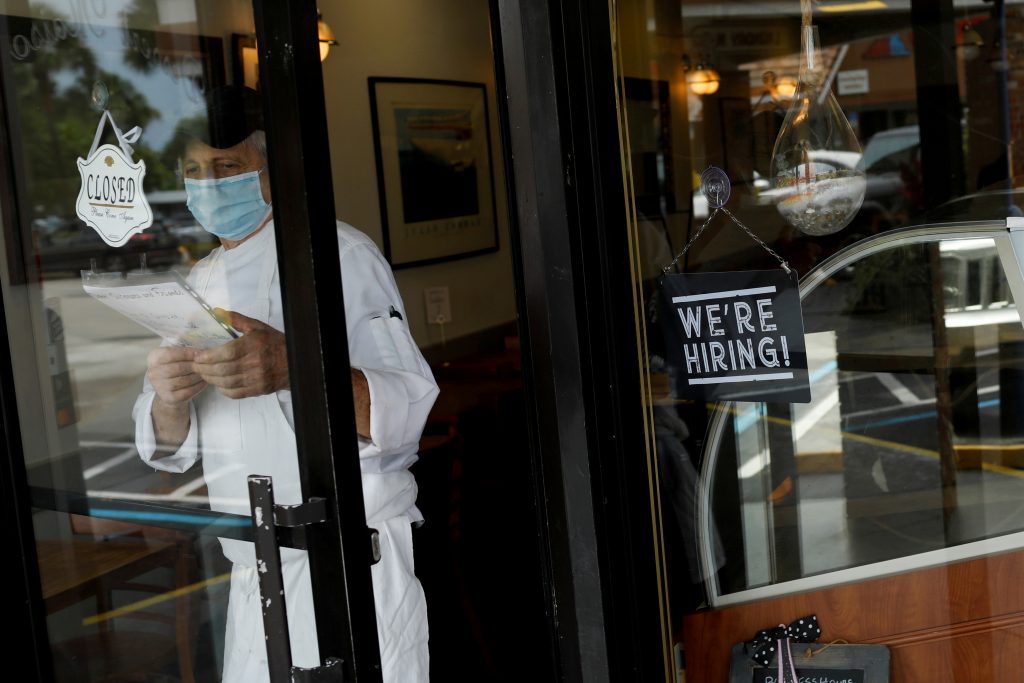 U.S. retail sales rose by the most in 10 months in March as Americans received additional pandemic relief checks from the government and increased COVID-19 vaccinations allowed broader economic re-engagement, cementing expectations for robust growth in the first quarter.

The brightening economic prospects were underscored by other data on Thursday showing first-time claims for unemployment benefits tumbled last week to the lowest level since March 2020, when mandatory closures of nonessential businesses were enforced to slow the spread of the first COVID-19 wave.

Though output at factories rebounded modestly last month amid a global semi-conductor chip shortage that is hurting automobile plants, manufacturing remains underpinned by the strong domestic demand. The upbeat data, which followed on the heels of recent reports showing inflation heating up, will likely not shift the Federal Reserve’s ultra-easy monetary policy stance.

“Demand is booming right now. Fed officials up to now have said they expect this boost in demand to be fleeting, and will not consider changes in policy until the labor market is at full employment and price levels increase at a sustained pace,” said Chris Low, chief economist at FHN Financial in New York. “Their resolve will be tested in the next couple of months.”

Retail sales rebounded 9.8% last month, the largest increase since May 2020, the Commerce Department said. Data for February was revised higher to show sales dropping 2.7% instead of 3.0% as previously reported. March’s rise pushed the level of sales 17.1% above its pre-pandemic level and to a record high.

Economists polled by Reuters had forecast retail sales would increase 5.9% in March. Retail sales surged a record 27.7% on a year-on-year basis.

The broad-based rebound was led by motor vehicles, with receipts at auto dealerships accelerating 15.1%. Sales at clothing stores soared 18.3%.

Many qualified households have received additional $1,400 checks, which were part of the massive stimulus package approved in early March. The package also extended a government-funded $300 weekly unemployment supplement through Sept. 6.

At the same time, temperatures have warmed up and the public health situation has been rapidly improving, allowing more restaurants to offer dining services.

The data, together with upbeat earnings reports from several companies, propelled the S&P 500 index and the Dow Jones Industrial Average to record highs. The dollar was steady against a basket of currencies. U.S. Treasury prices were higher.

Excluding automobiles, gasoline, building materials and food services, retail sales rose 6.9% last month after a revised 3.4% decrease in February. These so-called core retail sales correspond most closely with the consumer spending component of gross domestic product. They were previously estimated to have declined 3.5% in February.

Economists at Morgan Stanley raised their first-quarter GDP growth estimate by 100 basis points to a 9.7% annualized rate. The economy grew at a 4.3% pace in the fourth quarter.

The Fed’s “Beige Book” report on Wednesday, described economic activity as having “accelerated to a moderate pace from late February to early April.”

Growth is expected to top 7.0% this year, which would be the fastest since 1984. It would follow a 3.5% contraction last year, the worst performance in 74 years.

A second report from the Fed on Thursday showed output at factories increased 2.7% in March after dropping 3.7% in February. Though the rebound did not recoup all of February’s decline, that was offset by surveys showing strong manufacturing activity in New York state and the mid-Atlantic region this month.

Manufacturers in the two regions were also upbeat about prospects over the next six months, especially new orders.

“We think that activity in the manufacturing sector will keep picking up over time,” said Daniel Silver, an economist at JPMorgan in New York.

Indeed, households have amassed about $1.9 trillion in excess savings. That, together with a recovering labor market, are expected to underpin consumer spending this year.