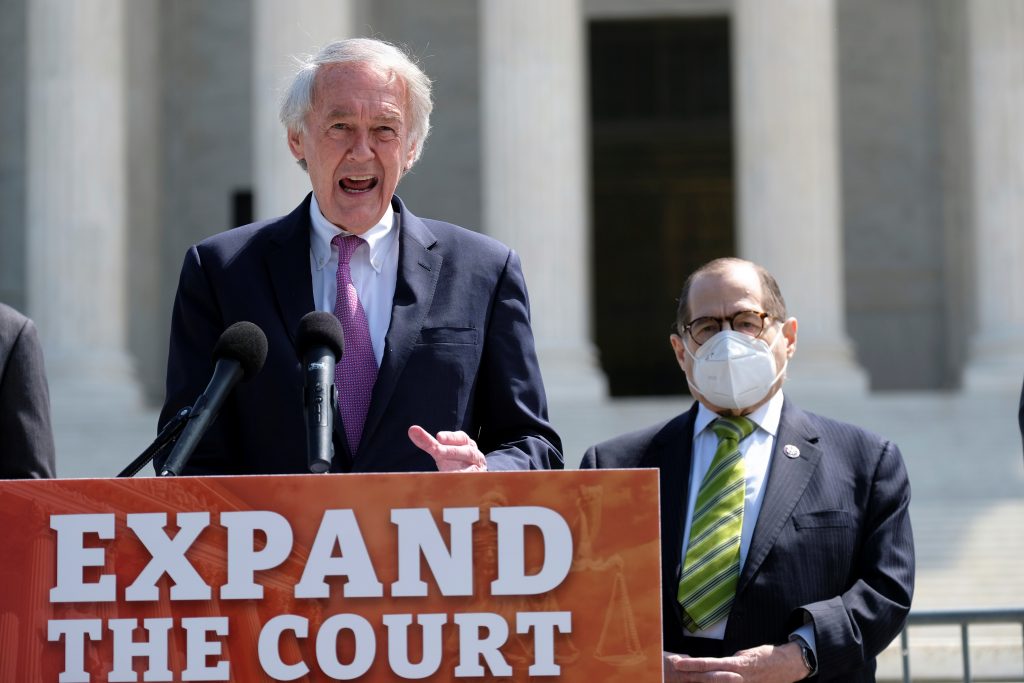 A group of liberal Democratic lawmakers on Thursday proposed expanding the U.S. Supreme Court by four justices, aiming to end its conservative majority, but the plan drew an unenthusiastic response from some top Democrats and was denounced by Republicans.

Senator Ed Markey and House of Representatives members Jerrold Nadler, Hank Johnson and Mondaire Jones introduced legislation in both chambers that would expand the number of justices to 13 from the current nine.

Markey said the measure would “restore balance” to the court. Republican former President Donald Trump was able to appoint three justices during his four years in office, giving the court a 6-3 conservative majority.

“Senate Republicans have politicized the Supreme Court, undermined its legitimacy and threatened the rights of millions of Americans,” Markey said in a statement.

President Joe Biden, a Democrat, last Friday established a bipartisan commission to study potential Supreme Court changes including expansion or imposing term limits on the justices instead of the current lifetime appointments. Biden gave the commission 180 days to report its findings.

The number of Supreme Court justices has remained at nine since 1869. Congress has the power to change the number and did so several times before that. Democrats hold slim majorities in the House and Senate. The Senate is divided 50-50, with Vice President Kamala Harris casting a tie-breaking vote. Most legislation needs 60 votes to advance in the Senate.

Expanding the court, an idea popular among some liberals and activists on the left, has not drawn broad-based support, with some Democratic leaders expressing uncertainty and Republicans firmly opposed to what is sometimes called “court packing.”

Senate Judiciary Committee Chairman Dick Durbin, a Democrat, balked at the idea of bringing the legislation to a vote in his panel.

“I’m not ready to sign on yet. I think this commission of Biden is the right move,” Durbin said.

Senate Republican leader Mitch McConnell denounced the legislation as a vehicle for Democrats to “pack the court, destroy its legitimacy, and guarantee the rulings that liberals want.”

Some Democrats and liberal activists have said all options including expansion must be considered to counter an entrenched conservative majority that could threaten civil rights, gun control and access to health care in the coming years.

Democrats accused Republicans of “stealing” a Supreme Court seat in 2016 when the Senate, then controlled by Republicans, refused to consider Democratic President Barack Obama’s election-year nomination of Merrick Garland to fill a vacancy left by the death of conservative Justice Antonin Scalia. Trump in 2017 was able to fill the vacancy with a conservative jurist.

Democrats then accused Republicans of hypocrisy last year when the Senate quickly confirmed Trump’s appointment of conservative Justice Amy Coney Barrett a week before the presidential election after the death of liberal Justice Ruth Bader Ginsburg the prior month.

Imposing term limits on the justices would likely require a constitutional amendment, though some scholars have proposed ways to accomplish it by statute.