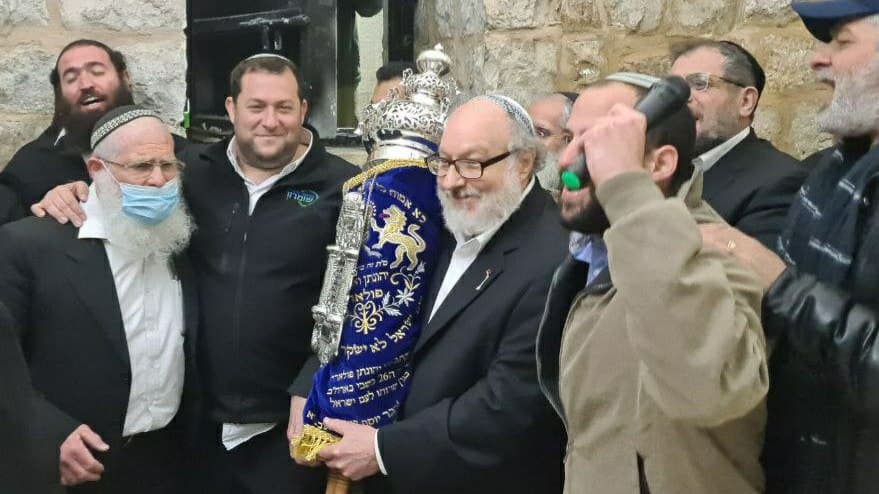 Pollard was accompanied by his wife, Esther, and head of the Shomron Regional Council Yossi Dagan, and Rav Shmuel Eliyahu, Rav of Tzfas, whose late father, Harav Mordechai Eliyahu, zt”l, fought tirelessly for the release of Pollard.

Pollard had commissioned the writing of the sefer Torah while sitting in U.S. prison some 12 years ago. Even back then, serving a 35-year prison sentence, he knew he was going to dedicate it to Kever Yosef.

“I feel a personal connection to this place, to Yosef who is buried here and to everything that he went through,” Pollard said during the ceremony.

He said that faith in Hashem was what helped him during his most trying times in prison.

“When I was in prison, the officers and the guard would routinely goad me and try to humiliate me by asking me, ‘Did I think I would ever come home, here [in Israel]; would I ever be with my wife Esther,'” Pollard said. “And I always answered them the same way: I would ask them, ‘Do you believe in G-d?’ and most of them would say yes. And then I would ask, ‘Do you believe that G-d can perform miracles?’ and they would say, ‘Sure, of course.’ Well, here we are.”

He noted that the sefer Torah will be used by future generations and that “we must all therefore make the promise… to bring it back permanently to Kever Yosef and to see it used every single day in honor and dignity.”