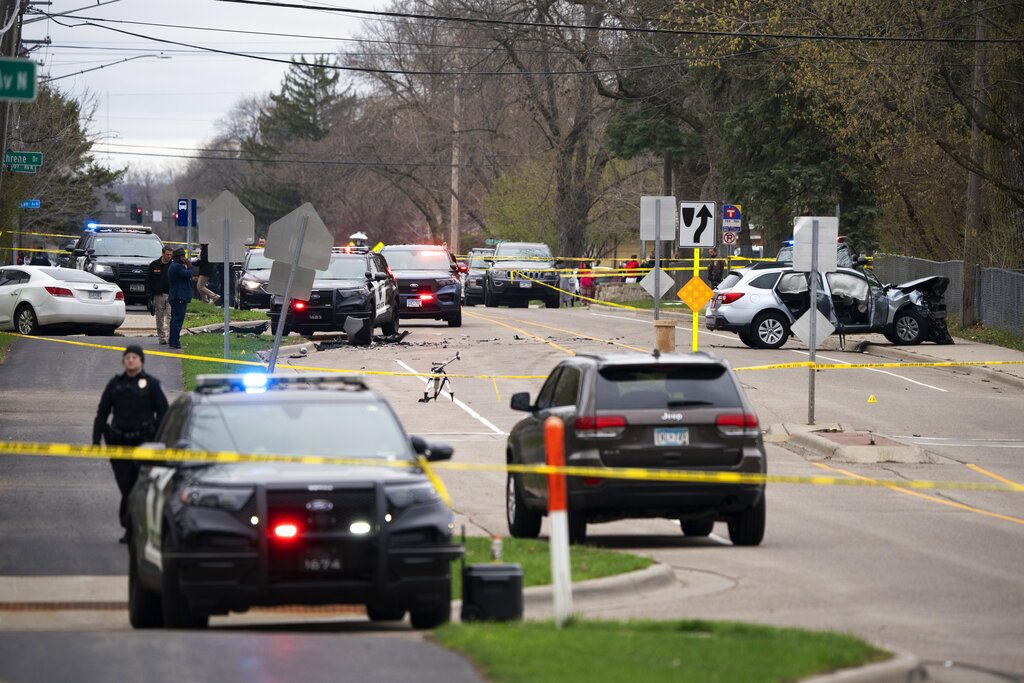 A white police officer who fatally shot a Black man during a traffic stop in a Minneapolis suburb resigned Tuesday, as did the city’s police chief — moves that the mayor said he hoped would help heal the community and lead to reconciliation after two nights of protests and unrest.

But police and protesters faced off once again after nightfall Tuesday, with hundreds of protesters gathering again at Brooklyn Center’s heavily guarded police headquarters, now ringed by concrete barriers and a tall metal fence, and where police in riot gear and National Guard soldiers stood watch. “Murderapolis” was scrawled with black spray paint on a concrete barrier.

“Whose street? Our street!” the crowd chanted under a light snowfall.

About 90 minutes before the curfew deadline, state police announced over a loudspeaker that the gathering had been declared unlawful and ordered the crowds to disperse. That quickly set off confrontations, with protesters launching fireworks toward the station and throwing objects at police, who launched flashbangs and gas grenades, and then marched in a line to force back the crowd.

“You are hereby ordered to disperse,” authorities announced, warning that anyone not leaving would be arrested.

The state police said the dispersal order came before the 10 p.m. curfew because protesters were trying to take down the fencing and throwing rocks at police. The number of protesters dropped rapidly over the next hour, until only a few remained. Police also ordered all media to leave the scene.

The resignations from Officer Kim Potter and Police Chief Tim Gannon came two days after the death of 20-year-old Daunte Wright in Brooklyn Center. Potter, a 26-year veteran, had been on administrative leave following Sunday’s shooting, which happened as the Minneapolis area was already on edge over the trial of an officer charged in George Floyd’s death.

Brooklyn Center Mayor Mike Elliott said at a news conference that the city had been moving toward firing Potter when she resigned. Elliott said he hoped her resignation would “bring some calm to the community,” but that he would keep working toward “full accountability under the law.”

A decision on whether prosecutors will charge Potter could come as soon as Wednesday. Meanwhile, the cities of Brooklyn Center, Minneapolis and St. Paul imposed 10 p.m. curfews.

Prosecutors in Hennepin County, where the shooting occurred, said they have referred the case to nearby Washington County — a practice county attorneys in the Minneapolis area adopted last year in handling police deadly force cases. Washington County Attorney Pete Orput told WCCO-AM that he had received information on the case from state investigators and hoped to have a charging decision on Wednesday. Orput did not immediately respond to a message from The Associated Press.

Elliott, the mayor, called for the governor to move the case to the attorney general to prosecute.

Ben Crump, the Wright family’s attorney, spoke outside the Minneapolis courthouse where a fired police officer is on trial in Floyd’s death. Crump compared Wright’s death to that of Floyd, who was pinned down by police when they tried to arrest him for allegedly passing a counterfeit $20 at a neighborhood market last May.